Aruna Ganesh Ram, a performance director and founder of the theatre company Visual Respiration, directed an installation called “Coloured and Choosing” at Gender Bender this year. It used lots of “sensory games” – blindfolds, touch, gestures, voice, music and random sounds – to establish the fluidity of gender. Audience members were blindfolded and taken into the performance space one by one for about half an hour, and were asked to sit on a bar stool for a bit while the actors performed around them. Friends I spoke with had very different reactions. Someone thought it was intimidating, someone else thought it was pretty sensual, one person even called it semi-orgasmic, others noticed they were thinking about the touching for ages after the performance. Aruna walks us through the choreography and tells us why it was such an enthralling experience for her.

What made you decide to blindfold your audience?

When you blindfold an audience, the other senses just take over. You become very careful about where you’re treading, especially in a public space. When you know where you’re going, you stride in with a certain sense of confidence because you can gauge what else is happening in the space. Here, you don’t know what’s coming at you, there’s so much inhibition and apprehension before you make a single move, and this uncertainty made the audience behave in really interesting ways.

For instance, all the estimations of the performers’ gender were way, way off. When I spoke to audience members after the show, they said things like “When she touched me… Or when he was talking to me” – it was hilarious because all their assumptions were absolutely wrong: the he’s were almost always she’s and the other way around. There were many times when I had led somebody into the room and they all said “When he led me into the room…” Because you’re blindfolded it was easy to play these games. But we decided that if an audience member removed the blindfold the performance would stop – so it was the mechanism at the core of the performance.

Why the focus on touching?

The minute you think of gender, stereotypes come into the picture, which we wanted to challenge. How can touch be gendered in a way that it could trigger memories for the audience? A handshake is such a regular thing. We wanted the touch to be remembered – so the audience was touched in unusual and specific places like the knuckles, the collar bones, behind the earlobes. We used a variety of touches – playful, aggressive, sensual, cautious – and lots of these triggered gendered memories. Lots of audience members said it took them on a “personal journey”, they related the experience to their personal lives very immediately, and I think that happened only because of the touching. If you give someone the permission to touch you in a public space, you are in a sense allowing them into your personal space, and that makes you think back to the last time you were touched like that. You’re also the only one in the space apart from the performers, so it becomes a really subjective experience.

How did people react to that? And where do you draw the line with touching?

There was nothing especially distinctive about men or women’s responses – I guess because touch is so personal. Some people enjoyed being touched by a particular material but other people would back off. There was a man who didn’t want to be touched on his face, there was a woman uncomfortable being touched on the finger. People reacted in funny ways as well – there was one person who kept flinching when a performer touched them with a cloth. Later it hit me that they were doing that because they assumed someone was licking them! 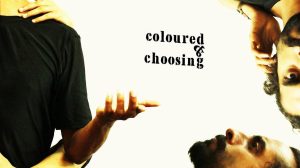 One thing we insisted on at the beginning was that people raise their hands and say they are uncomfortable if they felt it at any point during the show, but surprisingly, no one said that. I remember being part of a workshop in London a while ago where we were exploring touch. It began with regular touches and then escalated – the instructions were to whisper, hold hands, massage, hug and kiss, lie down with a person and cuddle them, then do something naughty with them. It was a major culture shock for me and I caught myself wondering, “Is this even a performance?” I told my professor at the end that I come from India, where touch is a bigger deal. So a big part of this project was to explore what kind of touch is regular and acceptable in an Indian context – we didn’t want a one-rule-fits-all kind of approach so we decided to just see what each individual seemed comfortable with. We even discussed a scenario about an audience member becoming violent! None of that happened, but I still feel that in some ways people weren’t adventurous enough inside the space – it was more of a “I’m happy sitting in my seat” reaction. I’ve noticed that more generally in immersive theatre here – audiences have a “least distance of viewing” attitude and don’t take too many risks, probably because they aren’t that accustomed to the form yet.

What else was part of the performance?

There were also a lot of voice and sound effects. The performers used a mixture of chatter, gossip, talk, sounds and touch to make the audience conscious of gender bias. We wanted to place the audience at the centre of what it means to be in an environment where they were constantly assessed, and drew attention to the fact that they were being watched, that people were judging them based on how they moved, or walked, or talked. What happens when you receive a “male” touch but hear a female voice? We played up these contrasts because we wanted the audience to go back with the idea that gender is confusing, not a black-and-white entity.

What was the inspiration behind this installation? Did you do a lot of people-watching?

We were a mix of female and male performers – but we decided to approach the performance not just from our own perspectives. We tried to explore how gender plays out in public, on the streets. So we did an observational walk on Indiranagar main road for about a kilometre, focusing on objects people touch and how they are gendered. Those findings were really insightful, because of little things we observed: when two people are on a bike, for instance, they are sitting quite intimately, but if you recreate that elsewhere the question of appropriate touch creeps in. And we noticed a striking difference in how people hold things that matter to them – women tended to hold their handbags really close to their bodies or chests but when men carried bags there was a distance from the body. We figured that men usually have their hands on their faces and cheeks whereas women didn’t.  So we tried to put all this into the performance. What happens if you’re feeling objects inside a bag. If your eyes are closed, do you have a sense of who that bag belongs to? What does it mean to have feminine objects in a masculine bag? What was most exciting about every performance was how much people-watching we got to do, we had multiple opportunities to experience how an audience reacts instinctively to aspects of touch, smell and voice and that learning is really precious.

Legendary Drag Queen Lady Bunny at The LaLit Ashok Bangalore on Drag, the Reactions She Gets in India and So Much More!