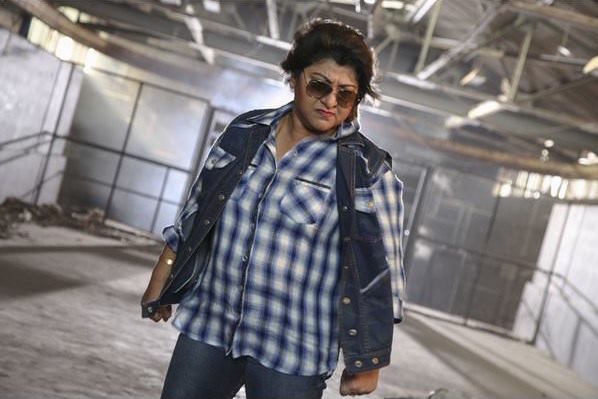 Mahakaali is a Kannada film starring action hero ‘Lady Super Star’ Malashri (child-star-turned-romance-flick-heroine-turned-thrasher-of-evildoers). Devi, her character in the film, is a boxing champion who starts a body called the Karnataka Women’s Protection group, and recruits Rani, Ramya, Uma and Chennamma – four young women from various parts of the state to help her in her task. With complaints streaming in to their office (which has a portrait of Kiran Bedi watching over them), the women are out tackling domestic violence, chit-fund companies scamming hapless investors, elder abuse, women cheated of their right to property etc, and their activities spread to districts all over the state.

Devi’s dream is to make sure the state becomes so safe that a “onti hudugi” – a girl on her own – can walk the streets at night, and that “bad things stop happening to women”. In the process, she pisses off corrupt politicians, policemen, and gangsters, who are determined to see that Devi is stopped so their nefarious activities can continue.

Awesome: The killer opening scene, in which Devi thrashes a bunch of goons dressed as women smuggled into the women’s jail to finish off Devi and her team, who are also in jail. Few pleasures in life can top watching a beefy female action hero turn beefy goons to pulp.

Awesomer: Several more crazy fight scenes in which Devi doles out plenty of punches, powerful kicks, and even a Liu Kang from Mortal Kombat-style bicycle kick. Clad in ill-fitting skinny jeans, ankle-high boots or trainers and checked shirts, Devi gets plenty of scenes in which she sends villains flying – rotating, even – in slo-mo while she strikes a pose, her short hair flying and dust slowly rising. All this, while rocking a 21st century mullet and makeup that never comes off, even in prison.

So good: Ridiculous villains, No. 1 being hirsute Home Minister Nagappa. Austin Powers’ Dr Evil bites his pinky, Gunda’s Bhulla speaks in drawn out, excruciating rhymes, and Nagappa… twirls the hair sprouting out of his ears. And he has a wife so badass and evil that she wears loads of gold jewellery and fancy sunglasses. Indoors.

There’s also Paramesh, the weasely lawyer who boasts of his ability to transform a “residential area into a red-light area”, the beefy corrupt Deputy Commissioner of Police Naresh Nayak who wears too-tight police uniforms and takes bribes from murderers, attempts to rape women and hangs out with the other villains in seedy dens, and a greasy-haired gangster to complete this evil foursome. They’re all hand in glove – and to prove it, they hatch devilish plots, stare at each other for a second of silence, and then throw their heads back and laugh evilly, all at the same time.

Then there are minor side villains like the insane Acid Babu, who threatens to disfigure women who won’t have sex with him by flinging acid on them. To show just how insane he is, he laughs crazy hyena laughs, dribbles his lips with his fingers, and has dance parties with his friends in anticipation of raping schoolgirls.

Not cool at all: Lazy filmmaking, a poorly written script that involves spouting platitudes about women’s safety/empowerment, while revelling in showing scenes of sexual assault and harassment to titillate, cracking disgusting rape jokes, and even having an item number about being a “onti hudugi” – in which a gorgeous woman with jiggly flesh clad in bikini tops and short shorts seems to invite the villains to come over and take advantage of her being ‘alone’. The women’s empowerment bits with Malashri are merely spliced into the standard movie formula of objectifying nubile girls and making lewd jokes for the gallery, so if you were expecting a movie with a female action hero (who is the only face on its poster) whose goal is women’s empowerment to be a little more thoughtful, shame on you.

WTF: There’s an elderly lady who thinks she’s about to go on a pilgrimage, but her son drops her off at an old-age home instead. When she shows up again at his door, the son and daughter-in-law kick her out. Devi shows up to save the day, lecturing the son about the terrible thing he’s done, when a reporter who professes to be Devi’s fan steps forward to ‘adopt’ the old lady. Instead of making the lady independent, Devi merely transfers her from the custody of one man to another.

Even worse, there’s a whole side-plot about two lovers, Pritham and Asha, who get together after some mild stalking and harassment by the boy (but lolz, so what). But just when things are going well, Pritham slips a date-rape drug in Asha’s juice, rapes her and gets her pregnant, and then dumps her. Turns out he’s evil after all – he’s Home Minister’s Nagappa’s son – and doesn’t want Asha now that she’s ‘used goods’. But Asha tries to convince him to marry her, for the sake of the child. On the day of his wedding to another woman, Devi shows up and forces him to marry Asha (the woman he RAPED, remember?). But you’re led to continue believing that he’s evil, until one day after the marriage, he breaks into peals of laughter to reveal that it was all his grand plan. He knew his parents wouldn’t let him marry her, so he devised the whole thing and called in Devi to help. So in the film’s logic, it’s cool that he raped her, because it was all for love. (Later, when the two lovers die painful, excruciating deaths, it will likely cause you immense joy.)

At the film’s end, Malashri’s awesome human powers (which served her fine until then) seem insufficient to fight the baddies, and she prays to Kali to come down to earth and help her defeat them. She becomes possessed by Kali, goes around impaling dudes on her trident, and the day is saved. The film would have been way awesomer if the Lady Super Star had managed it without the divine help.

Down to business: Does the film pass the Bechdel Test?

Technically, there are loads of women talking to each other, but most of it has to do with men, or problems caused by men. There are a few lines here and there that beat this, such as Devi arguing with her grandmother about what women should look and behave like – and why she isn’t interested in marriage – but these are throwaway lines, with little significance to the plot. With reluctance, I’d say the film passes. But only sort of.

It’s True! Serena is a Superhero. And Everyone Should Do Sprints