Picture a clearing in a Mangalorean coconut grove, in bright daylight. An Indian woman and a Russian-American woman lie in it, naked, in awkward post-coital bliss. The Indian woman says to the white one in Kannada, “Tanya, idhu thappalva? Nanage bhaya aagthaayde (Tanya, isn’t this wrong? I’m afraid),” and the Russian says, “I can’t understand what you’re saying, Bhanu. But we can communicate with our souls.”

Thusly, and dramatically, does 141 I Love You pass the Bechdel test with flying rainbow colours. You’ve heard of this movie, right? 141 I Love You is the first Kannada movie to feature a homosexual love story, and it released in theatres on Friday.

Director Bavaji V seems to have been put through an idli batter grinder by the Censor Board, and he hasn’t been allowed to publicize the movie or put up posters, but there is a South Indian movie playing somewhere in Bangalore with covered but audible lesbian kisses, and much homosexual touching, and wayyyy too much lesbian romance, while you’re just sitting here reading this!

I don’t really want to tell you much of the story because the lesbian romance plot is such a first. Long story short: Bhanu (Kavya Acharya) lives in her fiancé Gopi’s father’s large household in a village on the coast near Mangalore, waiting eagerly for Gopi (Farooq Khan) to come home from the US and marry her. Instead, Gopi turns up with his Russian-American girlfriend Tanya (Tanya). Tanya breaks up with Gopi after she finds out he was promised to Bhanu, and Bhanu falls out of love with Gopi when she overhears him on the phone telling his friend that he doesn’t want to marry her. Then Tanya and Bhanu fall in love. Add a lot of middle-aged married sex, and a patriarchal villain, and that’s the bare bones of the plot.

So I’ll come right out with my reaction: this is the one of the most campy movies I’ve ever seen. If you like only highbrow film, I must admit defeat and say you won’t like this film, and you should go watch Fire instead. The set decoration is kkrazy (the living room showcase is bursting with what amounts to taxidermy), the clothes are kkrazier (there aren’t enough colours in the rainbow), and the dialogue is kkraziest (crinnngeworthy sexual innuendo every two minutes). This is the main reason I think 141 is queer-friendly. It’s disingenuous, not in what I’d call a sly, urbane Dostana (2008) way, but through its campy, over-the-top, farcical tone.

Second, the film doesn’t hem and haw. Two women fall in love. They have song sequences and run around trees together. They say “I love you” to each other. They make out. They have sex. They talk about a future, marriage, adopting a child. They tell their community about it. As Bhanu says baldly to an expectedly bigoted poojari, “Naavibbaru ondu aagbittidivi. (The two of us have become one.)”

Third, the film doesn’t try and get clever with us. It doesn’t think it’s better or worse than any other mainstream Kannada film, just because it’s making Sandalwood history. It wants to entertain us, it blatantly wants to make money, it wants to be taken seriously as a comedy, and it wants to have a ‘theme’, like most other films. It isn’t doing itself, or us, any favours. What reassured me and told me that I as a queer person wasn’t being patronized by the film, was the presence of songs. A lesbian romance film could easily have decided that it’s ‘art’ and therefore above song-and-dance sequences. I’d have felt uncomfortable with that. But the story felt homegrown, and the story-telling structure was the same as that of most other comedy-drama Kannada films I’d seen, complete with the tradition of inserting Hindi words randomly into Kannada dialogue. (In this movie, I caught “kaleja” and “jhanjhat”.)

Fourth, the two women are not psychos. I feel it is important to note this, because of the psycho lesbian trope in Girlfriend. Tanya is a blackbelt in karate and is able to defend herself against would-be rapists, but that’s all. She has karate blackbelt boundaries. Thank you, Tanya.

But I can hear you wanting me to cut to the chase. So what’s the verdict for us Indian LGBTQIAs? Are we offended by this movie, or are we not? Eh? Eh?

But let’s put down that close-ended question and just talk for a moment, if I still have your attention. Sadly, the minute I use the word ‘lesploitation’, the film will probably lose most of you. And yes, the film doesn’t hesitate to shoot lesbians for the straight male gaze.

But just this once, I want to train a whole water cannon of context on the film until there’s nothing offensive left. Let’s say you have a core, skeletal lesbian romance plot. Now you have to write an entire mainstream Kannada movie around it, and make it palatable to the Censor Board, and make money. So you end up tainting it, perhaps unforgivably for some, but not for me, not in this ancient and backward year of 2015, and not in the context of Karan Johar’s sidelong, self-loathing sophistry around homosexuality.

What exactly does the film taint itself with? Well.

2. Pinkification. This is really a word used for breast cancer and children’s toys, but I think it applies here too. You might die of animated heart-shaped balloon overdose. And if you don’t, there’ll be the two pink lotuses touching each other delicately every time the two women make out. There’s even a scene in which the couple pose à la Titanic. Why are lesbians doomed to sickly sweet romance while gay men get to do all the hard, sweaty fucking? This minute of the trailer, for instance:

3. Infantilization. This is an extension of the pinkification. Bhanu and Tanya skip about, play pre-pubescent girls’ games, and are more steeped in nature than nature itself. Tanya tells Bhanu that she loves her for her ‘innocence’.

4. How many blondes does it take to make an Indian lesbian movie? We get that Tanya is straight-man-audience-bait. Really, truly. But we also know that you needed her to nonchalantly bring homosexuality in as a part of “American culture”, so that the entire lesbian plot hung on homosexuality being a Western thing.

5. Jingoism. Tanya gives Gopi a massive lecture on his NRI disgust of India. I must report that the names of Gandhi and Vivekananda are dropped. 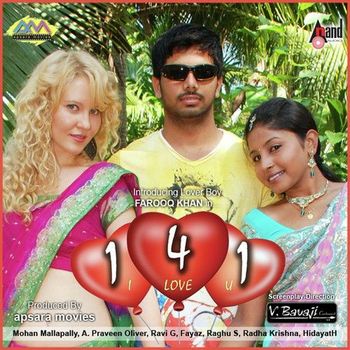 7. “One is not born a lesbian, but rather becomes one”. We don’t know about Tanya, but Bhanu becomes a lesbian because Gopi was such a stereotypical straight male asshole to her. Enuff said.

8. Conversion. (Spoiler alert.) This was so not on. At the end of the movie, Gopi hugs Bhanu for the first time, and she melts in his arms and seems to forget all about Tanya. That was underhand and mean. Yes, you can’t play farther afield than the Censor Board will let you. But no need for an own goal.

However, at that very moment, the screen says, “What’s Next?…141 I Love You 2”. So, coconut trees be thanked, a man’s touch isn’t the end of this lesbian romance. We’re giving you the benefit of the doubt, 141, and you better not be planning anything homophobic in the sequel, because as avenging-angel-Tanya says to Gopi, “I believe in God, and I believe that he never forgives sinners.”

22 Responses to “Can You Handle a Kannada Lesbian Film Complete with Song and Dance Sequences and an Overdose of Animated Heart-Shaped Balloons?”