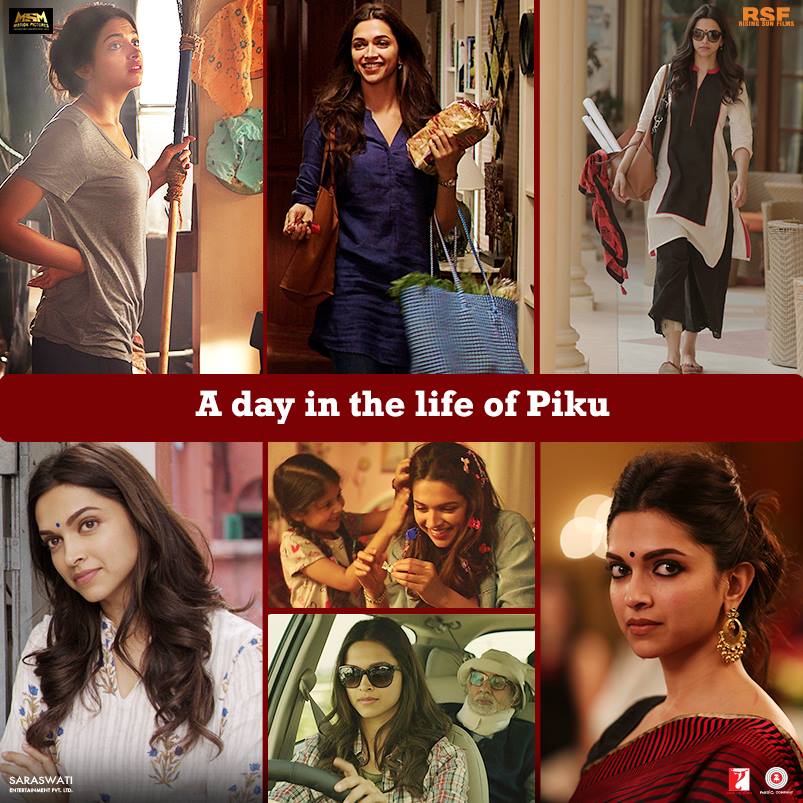 Piku is a delightful film about a 30-something working city-girl who struggles to balance her own life while taking care of her senile-ish hypochondriac septuagenarian father.

It is well written. Discounting Amitabh Bachchan, the acting is at par with the writing. The music is charming although comes under the standard hindie film music genre. The film’s cinematography is beautiful without being unnecessary.

Watching it in a housefull movie hall where everyone had gotten their ageing parents along – the aisles strewed with walkers and wheelchairs added to the experience of watching the film – made me feel guilty of not bringing my parents along.

The film opens with Piku (Deepika Padukone) and her father, Bhaskor (Amitabh Bachchan), having a screaming match, which starts with his constipation, his hypochondria and ends with her responsibilities at home and dating life. Hereon, the film follows Piku and her father from CR Park in Delhi to Calcutta but the conversation remains the same. Friends and relatives come and go but nothing really changes between the father and daughter. Not till Rana (Irrfan Khan) lands in the midst of it.

It is refreshing to see a film treat its women characters so well – most have names and a back story, even the ones who show up only for one scene each. Moushumi Chatterjee plays Chhobi Masi, Piku’s maternal aunt. It is always great to watch her on screen. Swaroopa Ghosh plays Piku’s paternal aunt and while we don’t catch her name because she is always referred to as kaki, her presence and acting chops just get you from the first moment that she lands on screen. Rupsa Banerjee plays Eisha, Piku’s silent and nerdy cousin (Chhobi’s daughter). We don’t really hear a squeak from her through the movie except when her face punctuates the family banter with teenage ennui. Nutan Mathur plays Rana’s mother, and Prerna Chawla plays his sister Ritu. Despite their minimal presence, the writer makes sure that they’re not just two-dimensional stock characters.

While the film is all about Piku, it revolves around all the men in her life – starting from Bhaskor, Budhan (his faithful man-servant played by Balendra Singh), Dr Srivastav (his friend and homoeopath played by Raghuveer Yadav), Syed (Piku’s business partner and friend with benefits), and Rana who is Syed’s best friend and who also runs the cab service that is used by Piku and her company.

Bhaskor is constantly pushing Piku to be independent and great without any concern for what she wants for herself. He claims to be so open-minded about Piku’s choices that he goes around telling strangers that she is sexually active. Chhobi plays the voice of reason, who fights with Bhaskor over this independence he keeps harping on about.

Piku’s late mother is also often talked about. So while there is a lack of scenes where only women talk to each other, it is balanced fairly well by group scenes or scenes with only men where they talk a lot about women. This bias in writing is a welcome change, and rather interesting because the story and screenplay are written by a woman writer – Juhi Chaturvedi.

What is further curious and beautifully shown via the writing is the irony of men who want to be feminist allies to the women in their life. In the long family banter scenes, they keep interrupting the women who are talking about what they want only to tell them about independence. Full props to Chaturvedi for that.

Piku is quite the strong and well-written female protagonist. She does not tolerate male entitlement. She disses any kind of patronizing by the men in her life, checks their intent in such situations and if need be cuts them down to size. Piku is also unafraid to wear her emotions on her sleeve. The same qualities are worn by all the women in the film – be it Chhobi or Kakima or other smaller characters.

What is puzzlingly odd about Piku as a woman in a city, though, is the utter lack of female friends. We also would have loved to see Piku at work, which we rarely do and sometimes are only told about through dialogue.

Chhobi and Kakima deliver some fantastic lines as well. The tension between their characters that comes from being the maternal and paternal aunts is tactile, and even unrelated to the men in their lives. Chhobi is unapologetically a colourful person, who has already been married thrice and knows how to win against an obnoxious Bhaskar in an argument.

Kakima makes a jab at the men in a discussion about property and maintenance expenditures about how early on in her life, she did not accept a high-paying job because that would mean that she would make more money than her husband and how for that time it wouldn’t be socially acceptable.

What is also refreshing is that the film does not chase any love stories and romance between Piku and her two lovers of sorts. And it does not judge any woman for the choices she makes. It even punishes the characters who do. But nevertheless, it fails the Bechdel test.

Gajendra Chauhan Opened His Mouth and Had it Quickly Shut