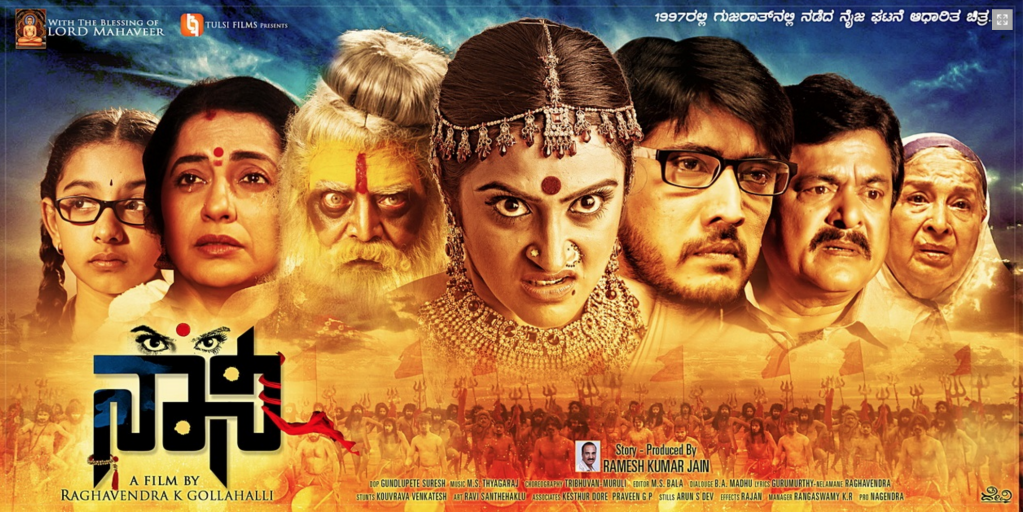 Naani, the directorial debut of Raghavendra K Gollahalli that released this weekend, begins with a young woman named Mantra (Priyanka Rao) and her husband (Manish Arya), so sick of the busy city life in Bangalore that they move into an old ancestral home in Madikeri. It’s a movie so garbled in its editing that it’s hard to figure out what’s going on, but in the first half we gather that Mantra becomes possessed by a spirit and is intermittently transitioning into something demonic — with pearl white or dirty yellow eyes and hair flying towards the dark clouds that loom over the ancestral home. Plenty of creepy stuff happens, including Mantra trying to kill her husband, and it takes a good hour and a half for the film to establish that the house is haunted.

Post-interval, a crazy Aghori-baba-type eccentric tantric practitioner — smeared in what looks more like talcum powder than ash — tries to “treat” her by speaking with the spirit. And an old gatekeeper of the house narrates the story of Naani, the spirit who has possessed Mantra.

This leads us to a flashback to 1984, when a couple (played by Suhasini Maniratnam and Jai Jagadish), desperate to have a child, visits a doctor to try what he calls “inverti-fertilisation”. We’re not kidding.

Amidst lots of talk about assisted reproduction and boring powerpoint slideshows of images that look like they were taken from a Class 8 Biology textbook, we are told that for 15 years, they couple has been unable to conceive, and the pressure of not having children gets to them. The wife goes so cuckoo that she thinks of herself as the mother of three plastic dolls. The husband, his masculinity questioned by a harsh and judgemental society, is unable to take things anymore and convinces his wife (or rather, blackmails her) to undergo IVF. As the husband is impotent, they use donated sperm to conceive.

Eventually, a daughter, Naani, is born.

What I hated most about the film was that Naani is made out to be an extremely pitiable child, born (illegitimately, it is suggested) from another man’s sperm. She is a weak, sickly child who at 12 loses the use of her legs to polio, is confined to a wheelchair and subjected to taunts by her father’s colleagues (although their intended target is the father himself).

She yearns for love, but her father spurns her as he sees her as another man’s child. Naani’s parents leave her alone at home to bring back a cake for her 13th birthday, but when they don’t return after a few days (drawn out excruciatingly in the film), she starves herself to death. She returns as a ghost, and eventually torments Mantra.

Finally, decades later, Naani’s father who had abandoned her apologises for his mistakes, and blesses her with the wish that she be born to parents who will treat her well. Completely satisfied with the apology, Naani, the ghost, is exorcised and is born a few years later to Mantra, thus ensuring a happy ending. Phew.

The film’s makers say the movie is based on the true story of a “test tube baby” born to a couple in Gujarat in 1997, but who died tragically at a young age, leading to rumours of their home being haunted. But the film’s focus to a large degree is the cruel pressure on men to conform to accepted standards of masculinity, and how this can destroy lives. This is driven home in an annoyingly preachy manner. But while delivering it’s message about rigid standards of masculinity, the film turns assisted reproduction, of all things, into some sort of bogeyman. The film itself seems to be confused about whether it is trying to educate people about IVF being a useful option to couple looking to conceive, or whether it is trying to offer a disclaimer about IVF: you’ll have kids, but they may not be as healthy as children conceived “naturally”. (And who knows, they may just return as ghosts to haunt you!)

Ridiculously, the film claims to be a “science fiction and adventure thriller” (because apparently the scientific process of ‘inverti fertilisation’ is a futuristic fictional probability). Instead, it draws the same old links between women, mental illness, not having children, hysteria, and the supernatural.

If there’s anything worse than Naani’s plot, it’s the special effects. What’s with the screen savers used as transitions between scenes or that badly edited snake on the roof that is completely unrelated to the story? And clearly, clearly, the makers have no clue about what sci-fi is. How Suhasini Maniratnam and Jai Jagadish were pursuaded to act in this film is beyond me.

There’s one hilarious scene in the film, however, that I do recommend that you watch. It’s an awkward, cringey scene in which Naani’s father is talking to the doctor, who uses stilted textbook Kannada to talk about the fertilised egg — the combo of ‘andaani’ (eggs) and ‘veeryani’ (sperm), words I’d never even heard before. He then advises Naani’s father to “try not having sex” once his wife is impregnated. After listening to the poor doctor’s comically clinical description of sex, I don’t think the thought would even have crossed the man’s mind.