HomeCultureIn A Stunning New Book About Qandeel Baloch, We Me ...
August 10, 2018 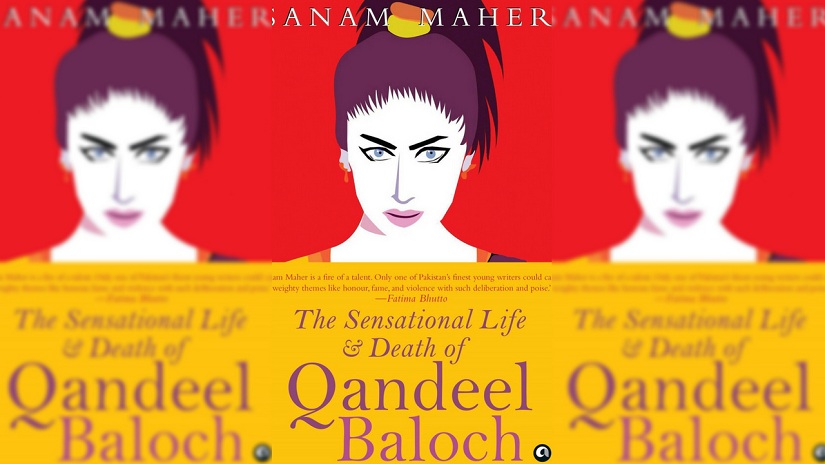 The Sensational Life & Death of Qandeel Baloch by Sanam Maher has been shortlisted The Shakti Bhatt First Book Prize 2018.

While making her version of Thackeray’s Vanity Fair back in 2004, Mira Nair spoke of why her film didn’t judge Thackeray’s social climbing heroine Becky Sharp the way that 19th century (and later) readers did. Nair said, “There is this English attitude that you must have your comeuppance if you do something wrong; that attitude…I had no time for. Today Becky would be a champion for crossing classes.”

Paperbacks of the 80s and 90s – from Sidney Sheldon to Jackie Collins to Danielle Steele – were also structured around audacious heroines who wanted to get away from it all. Every book included rape, or, at least, attempted rape, cruel first husbands, lost babies, lovers who were benevolent, lovers who pretended to be benevolent, grubby jobs to glamorous careers. Even the more recent Sacred Games has Jamila Mirza who becomes Miss India Zoya Mirza through sheer determination and a scrapbook full of plastic surgery wishes. These were the backstories through which you the reader galloped to the HEA, the Happily Ever After. No matter how ‘gritty’ those novelists’ aspirations, they helped the heroines get away to velvety settings that best appreciated the diamonds they were.

In Sanam Maher’s brilliant new book about Qandeel Baloch, what emerges is a similar trajectory of the girl who built a new life, a life that no one had conceived of before her: That of a sexy, funny, social media star in Pakistan. But Baloch famously got no HEA. In 2016, months after her comet soared across the sky with her viral Valentine’s Day video, Baloch was killed by her younger brother. What Maher does with cold perfection in The Sensational Life & Death of Qandeel Baloch is establish that if she hadn’t been killed by her younger brother, there were hundreds of others who wanted her dead and may have done the job. The book is a steady journey through a familiar (oh, too familiar) dystopia of people who actively wished for Baloch to die and others who actively contributed to the wave of hatred for her.

Maher’s great achievement in this book is to take us to the multiple worlds and lives that Fauzia Waseem lived before and after she became Qandeel Baloch. Her rural childhood, her marriage, her stint in a women’s shelter, her time as a bus hostess, her many genuine friendships with men who wished her well, her time on a reality show, all the way to the height of her fame when she kept telling people around her that her brothers wanted to kill her but no one took her seriously. Not because men were not killing women in their families everyday but because who would take the drama queen seriously?

But Maher’s success is also in how she has located Baloch’s story alongside many other people who had one thing in common with her: The desire to be plucked out of anonymity. From the housewife on Pakistani Idol to several models to the young man who became internationally famous as the hot chaiwala to the Mufti Qavi who became famous because of his television encounters with Veena Malik and Qandeel Baloch, we see their uncomplicated desires to be Someone and everyone else’s desire to ensure they burn for looking skyward, forget flying. Sometimes you see, as in the case of the 17-year-old Hot Chaiwala aka Arshad Khan, that there is no desire for fame but the machine is nevertheless determined to flatten you, suck you dry and spit you out like so much ganna. On the other end, is the highly accomplished, internationally acclaimed lawyer and digital rights activist Nighat Dad who lives in barbed-wire anonymity because she doesn’t need to be told by frothing hyena like men online that ‘ND will be the next QB’. But still, the desire to express themselves, to be more, to do more drives them all.

In the case of the women in the book, they are marvelous magicians of reinvention. Khushi Khan goes from earthquake victim to teen social worker to employee in a real estate company to boutique owner to model to model coordinator to personal trainer in a gym. Khan’s B plot is a bit like Moon Das in Meenal Baghel’s superb book about the Neeraj Grover murder Death in Mumbai. Khan navigates the same showbiz world as Baloch and emerges much less successful but alive. In Death in Mumbai, Moon Das is actually cast as Maria Susairaj in one of the many movies that planned to tell the Grover murder. The movie is never made (as far as I remember) but Das too has lived the life that Maria did of fame-hunting. Das has already survived a crazy stalker by two inches who killed her mother and uncle and lay in wait for her. Khushi Khan also survives through a combination of wit and good luck. When desperate for money, Khan gets a call from a man she considers a friend. Now, horribly he offers to pimp her out for gang-bangs and expects her to think that it’s cool. Khan recalls what she told him.

“Here’s the thing, Ali bhai,’ she replied. ‘I have six clients. My six brothers. Two are in Karachi, magar tension na lo, I’ll get them to come to Islamabad. You just put your mother and your sister on the first bus here.’ ‘Have some shame, Khushi,’ Ali snapped, and hung up.

Baloch too fought the hypocrisy directly and indirectly. Social media, she tells people, ‘kissi ke baap ki jaageer nahin hai’. Another time she mocks the people who call her a blot on shareef log, “If they are from good homes, then they should sit at home.” For a while it seemed like Baloch would be that line from the Mira Nair edition of Becky Sharp, ‘not a social climber but a mountaineer’.

Nighat Dad (who is my Facebook pal and about whom I knew embarrassingly little before reading this book) too has a jaw-dropping backstory to rival the Sidney Sheldon heroines. Quick change maestras similiar to Baloch and Dad appear through the book. Malala Yousafzai makes a sliver of a thrilling appearance. A conservative policewoman on Baloch’s case is not a fan but only makes a case for slow change in a traditional society. Men, on the other hand, are marked by their refusal to change. The very charming Mufti Qavi understands enough, like many men of my acquaintance, that to seem liberal and kindly towards women would win him many cookies. (Watching Maher pluck the silver lining away from Qavi’s self-conception to reveal the familiar garajta hua cloud is like watching a ballet) On television, this seeming liberality would take him from being a man on the Eid moon-sighting committee to being a constant star. Qavi can’t and won’t change enough to examine what his real feelings towards women are. The journalist who outed Baloch’s real identity (including a copy of her passport!) refuses to accept any responsibility. The men in Arshad Khan’s entourage cannot accept being around a potential star who doesn’t throw his weight around.

Nighat Dad’s father who is a rare masculine example of change in the book, thus, is rewarded with a superb moment of black comedy. Nighat’s (ex) husband at this point in the story has cheated on her, tried to kill her and tried to strangle her child.

“In the morning, Nighat’s father came to the house. He wanted to take her home. ‘If she stays here, I’ll kill myself,’ her husband threatened. ‘In that case I would have liked to leave her here, just to see that,’ Nighat’s father said, picking up her bags.

This moment is at stark contrast with Baloch’s first attempt to run away from her violent husband. She said, “Something is wrong with this man. He wants to kill me.” And that simple acknowledgement that there is something wrong with men who want to kill women is something that Maher finds rarely in her extensive reporting.

This morning I looked at Maher’s Twitter timeline and found the story of a 17-year-old Pakistani girl, Sabika Sheikh who went to the US on a year-long academic exchange programme. Last week, she was at school in Santa Fe, Texas where 10 students were shot down by their 17-year-old classmate, Dimitrios Pagourtzis. According to several reports, the thing that tipped the balance in Pagourtzis’s gun-loving, ‘Born to Kill’ t-shirt wearing mind was the opportunity to kill his classmate Shana who had refused to go out with him. He killed Shana and Sabika.

Omerta is Like Rajkummar Rao’s British Accent in the Film: Sometimes Perfect, Many Slips