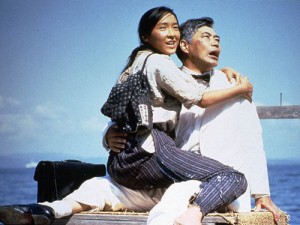 Kanzo Sensei is a film that turns on the idiosyncratic truths of its even more idiosyncratic characters, led by the eponymous doctor who runs around to a jazz score, Don-Quixote style, diagnosing every single one of his patients as suffering from enlarged livers.

Kumiko Aso as the prostitute Sonoko who forces the doctor to take her in as his aide and nurse is no practical Sancho Panza. Her quixotic acts are what drive much of the film’s narrative, which includes hiding an escaped prisoner of war in the final days of World War II in a town where Japanese soldiers teach housewives to bayonet American soldiers.

The last seven minutes featuring Sonoko (diving into the sea with a harpoon to kill a blue whale), the Doctor (befuddled as ever on a rocking boat in the middle of the ocean) and a blue whale (which rolls its eyes – I’m not kidding) is magical. Sometimes I believe that I continue to watch films in the hope that one day I’ll encounter a film whose ending will surprise, awe and haunt me much as this did! And Sonoko is my Rosebud.