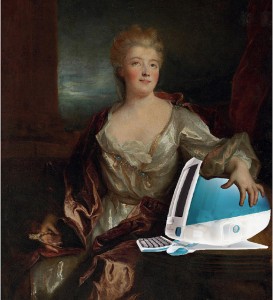 One usually encounters her name as a footnote to Voltaire’s biography: “In 1733 Voltaire met Émilie du Châtelet, who was 12 years his junior and with whom he was to have an affair for 16 years…”

But she wasn’t just Voltaire’s lover.

A glance at her own biography makes it clear that she was that double rarity, a multidimensional prodigy – starting from languages, music, fencing, riding when a child, moving on to mathematics, physics, and philosophy, but also the dazzling social whirl of the court of Louis XIV, with her fair share of lovers which her early marriage does not seem to have interrupted.

It is easy to be swept away by the drama of her life and how it ended. She was born into the French aristocracy on Dec 17, 1706, and died post childbirth on September 10, 1749. Three people were apparently all amicably present at her death-bedside – the real father of the third child she had just delivered, Voltaire, and her husband. But all this distracts from her achievement of going beyond Isaac Newton to clarify a fundamental notion of physics – energy.

Newton’s Principia was the first work that Châtelet translated. The standard textbooks on mechanics attribute all the basics to Newton, and thus energy as well. But this is an oversimplification – the statement of his laws does not include the word, or the concept, of energy. The fact is that he did not need it for the work he did on planetary motion, since he had the luxury of finding a complete solution to this problem (among many others), that factors in energy, but implicitly. Keynes’ description of Newton as the last magician rather than the first scientist brings this out. Newton could find a path for himself, but magicians cannot, by definition, be easily followed. Thus his magnum opus, the Principia, was not a handbook to be used, but a book of revelation to be interpreted and processed before it could reach lesser mortals.

Châtelet played just that role of a priestess in France. Amidst all the tumult of her life, she had educated herself as a physicist and mathematician. This was first via tutors and then by actively seeking out many contemporaries with whom she could hold discourse as an equal. It is possible that Voltaire’s brief exile in England – he may have even attended Newton’s funeral – drew him and then her to the Principia. What is clear is that the years before her death were spent in single-minded pursuit of creating a French version of the Principia with a critical commentary. This was only published posthumously and remained the standard French translation well into the 20th century. Contemporary accounts describe how she worked through the book with the mathematician Clairaut and his student, so everything was checked by three people – so this was no mere translation.

One critical insight in Châtelet’s translation is that what we call kinetic energy today, and for which she gave the formula, was a characteristic of motion quite distinct from momentum, and could be exchanged with potential energy. This was backed up with experiments on balls dropped into clay! It took many more years for the fog around the concept of energy to clear, but Châtelet showed the way. Chatelet’s work thus was the first to clarify the notions of  potential energy (e.g. a weight placed at a height) or kinetic  energy (the same weight gaining speed as it loses height) and how the total was conserved. It took another century and a half before heat was understood and included in the accountancy of energy.

The biography of Châtelet mentioned above covers the circumstances in which this achievement took place – the extract below is in her own voice:

I feel the full weight of the prejudice which so universally excludes us [women] from the sciences; it is one of the contradictions in life that has always amazed me, seeing that the law allows us to determine the fate of great nations, but that there is no place where we are trained to think … Let the reader ponder why, at no time in the course of so many centuries, a good tragedy, a good poem, a respected tale, a fine painting, a good book on physics has ever been produced by a woman. Why these creatures whose understanding appears in every way similar to that of men, seem to be stopped by some irresistible force, but until they do, women will have reason to protest against their education. … I am convinced that many women are either unaware of their talents by reason of the fault in their education or that they bury them on account of prejudice for want of intellectual courage. My own experience confirms this. Chance made me acquainted with men of letters who extended the hand of friendship to me. … I then began to believe that I was a being with a mind …

Rajaram Nityananda is a theoretical physicist working at the Azim Premji University, Bengaluru. He was earlier with the Raman Research Institute, Bengaluru and the National Centre for Radio Astrophysics, Pune. His research  includes mechanics, optics, and statistical phenomena mainly in astronomy, and he is keen to write and lecture about about  these areas.