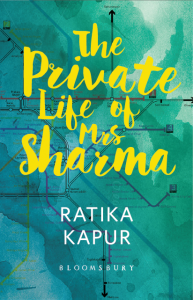 The Ladies Finger is delighted to bring you this excerpt from Ratika Kapur’s second novel, The Private Life of Mrs Sharma, excerpted with permission from Bloomsbury India. The eponymous Mrs Sharma, Renuka, is one of the most satisfying Indian literary characters you are likely to have encountered in recent times. She is a receptionist in a Gurgaon doctor’s clinic, a mother with the focus of a heat-seeking missile to her son Bobby, a thoughtful wife to the husband far away in Dubai and a dutiful daughter-in-law. Mrs Sharma is full of moral rectitude, except when she is not. She is full of prudence, excerpt when she is not. Well-behaved, except when she is not. In this excerpt, she talks of a visit to the home of Vineet, a younger man she met on the Metro and has recently become friends with.

That day when I went to Vineet’s house and he cooked for me and we talked about Bobby and what not, that Thursday I did not only share my thoughts with him, but I also shared my body. Yes, I had sex with another man. And, actually, I also had sex with him yesterday, and I don’t think that it was wrong.

It is not that shocking, actually. Everybody knows that everybody does it. Man or woman, everybody does it. Look at my husband. He happily told me about how the men he lives with go to some Anglo nurse from the hospital, but that he, my sweet and innocent husband, he just thinks about his wife and masturbates. Was I born yesterday? I did not ask him that day, but I want to ask him some questions now. My dear husband, when the bodies of those around you are blessed with sleep while yours lies alone on its bed restless and desperate to be held, what do you do? Tell me. Do you actually just masturbate with pictures of your faraway wife in your mind? Is that actually the truth? But what happens when your own hand is now not 115 enough, when your body screams to be touched by a hand that is not your own? What do you do then, my dear? What do you do? You are not supposed to lie to me. And you don’t need to lie. I am your wife, remember? I am your wife, and a wife knows. A wife has to understand. I see the quiet in your eyes every Friday and Sunday, I see the peace in them, the type of peace that can only come when the body is also at peace. You can tell me the truth. You are allowed to tell me that you also line up outside the Anglo nurse’s room like those other men do.

I think that my husband is right about one thing. I have become a bold woman. Still, what does it actually mean? What is a bold woman? What does she do? Isn’t she just a person who, like the men around her, does certain things without feeling scared? When people say, Oh, look at that woman, she is so bold, what are they saying? Actually, the only thing that they are saying is that she is not scared to make certain types of decisions. It is just like what I say about poverty, about how poverty is like being in jail and you can decide to suffer in your cell or you can decide to be free. I decided to free our family of its suffering and so I convinced my husband to go to Dubai, and many people said that I was so bold, and some people said that I had gone mad, but what do these people know? It is the same thing here. See, what did I do? I had sex with Vineet. This time it was not about my family but about my body. I decided to free my body. I decided to free my body of suffering, another type of suffering, obviously, but actually it is not that different. It is still the type of suffering that comes from the pain of need.

So, call me bold and also call me mad, because sometimes it seems that bold and mad are one and the same things, but, yes, I had sex with Vineet. And what is this thing called sex? It is just a natural thing that the body needs, like food and water. I read about it in a magazine at the clinic. A bodily need, that is what the article called it, and the article was written by an American doctor. A bodily need, that is all. If the washing machine was working, if that useless mechanic had actually come to fix it, maybe I would not have had sex with Vineet. Maybe, as I normally did, I would have just switched on the machine, and thought about my husband and me when he was still here in Delhi, and touched myself, and everything would have been fine.

Still, everything will be fine. Anybody is free to call me bold or mad or both, but nobody can point a finger at me and say that I am not still a respectable woman. And I think that Vineet is also still a respectable man. Both of us have duties to our families that we fulfil, duties to our jobs that we fulfil, and we fulfil each and every one of them without fail. So, if for just one or two hours we put those duties on one side and took off our clothes and put those down on the other side, what was wrong? Can you actually say that this, these small, little actions, made us less respectable people?

About the author: Ratika Kapur’s first novel, Overwinter, was longlisted for the Man Asian Literary Prize. Her second, The Private Life of Mrs Sharma, is forthcoming from Bloomsbury in December 2015. She lives in New Delhi with her husband and son.

‘Smile and Stay Thin.’ Life as an Air Hostess in the 60s

2 Responses to “Excerpt: The Private Life of Mrs Sharma”