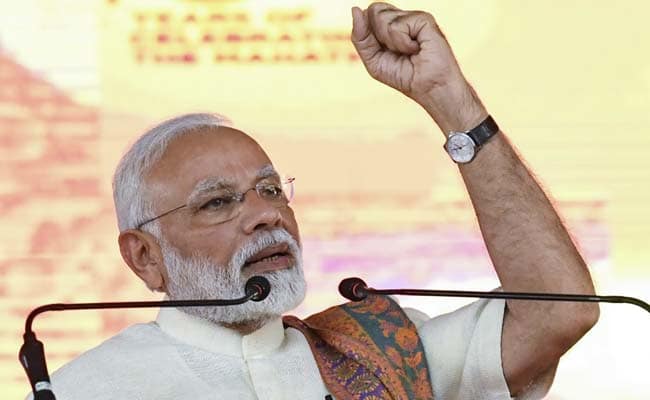 On Tuesday, Prime Minister Modi gave tips to students about coping with exams but, as it turns out, marks have not been his friend as the week progressed. In fact, maths has not been his friend at all. On Thursday, January 31, there was widespread uproar over the Business Standard scoop revealing that India’s unemployment rate is at a 45-year-high. The data comes from a NSSO survey that has been vetted by the National Statistical Commission but not yet released by the government. The scale of the outrage around the jobs data has muted another other set of disorienting numbers that have come straight from the prime minister this week – this time about rape.

According to an ANI report, on Wednesday the PM said at a youth conclave in Surat that, “There used to be rapes in this country earlier too, it is a shame that we still hear about such cases. Now, culprits are hanged within 3 days, 7 days, 11 days & a month. Steps are being taken continuously to get daughters justice & results are evident.” These are three astonishing sentences to emerge from the PM, because no part of them is true, and no part is something that a responsible adult should make.

Let’s go to the numbers first. So culprits are being hanged within three days, and so on. One could ask: three days of what? Within three days of the crime or three days of conviction? Within a month of the crime or a month after conviction? Because the fact is that conviction rates for rapes stood at a measly 25 percent in 2016. And which leaves out the thousands of rape cases which are pending investigation, or those pending in the courts (118,537 at the beginning of 2016, according to this detailed report). Just to be clear, the optimistic timeframe for fast-track courts clearing a rape case is also at a much longer two months.

All of this ‘numbers’ discussion leaves out the long and brutal process through which women try to report sexual assault to the police. And all the ways in which marginalized women are further marginalized when they attempt to report sexual assault. And what happens when the political establishment has some stakes in keeping the accused out of jail? But we are doing maths, no?

This three days, seven days, 30 days remark—which sounds like what a call centre might tell you about when your Internet connection will be restored—is scandalous in itself. But no thoughtful person interested in the nature of justice should be making throwaway remarks about capital punishment, no matter their ideological position on the subject. Even without getting into the facts about how capital punishment is no deterrent to sexual assault anywhere in the world, and has been shown to actually further cause underreporting of the crime.

But if we stick to Modi’s numbers, here is the most basic #fail. While hundreds of Indians have been sentenced to death (162 death sentences were imposed by trial courts just in 2018, the highest number in a calendar year since 2000 according to the NLU Delhi’s Centre on The Death Penalty), only four have been executed in the last 13 years. The last time India carried out an execution was four years ago—in 2015, Yakub Memon was hanged for his role in the 1993 Mumbai bombings. So, really, what on earth was Modi saying in Surat? I guess that’s what you call a Big Lie.

Let’s go to the part of “steps are being taken continuously to get daughters justice & results are evident.” I don’t know what these steps for whose daughters are. Is it the eponymous daughters of the Beti Bachao, Beti Padhao Yojana which was supposed to ‘change mindsets regarding the girl child’? Recent reports have actually shown that “56 percent of the funds allocated under the ‘Beti Bachao Beti Padhao’ scheme from 2014-15 to 2018-19, were spent on media-related activities. In contrast to this, less than 25 percent of the funds were disbursed to districts and states. Over 19 percent of the funds weren’t released by the government in the first place.”

Which brings us to “results”, which presumably means either a drop in sexual assault or a rise in convictions. Since convictions are where they are, let us turn to the possibility that there has been a drop in sexual assaults due to the mysterious “steps”. Once more, you would be stymied here because it turns out that we don’t have the data here—the last National Crime Records Bureau report from 2017 has actually not been published. This is the first time since 1953 that the report has not been published.

Clearly this is not someone to vote for if you are invested in the facts about crimes against women.