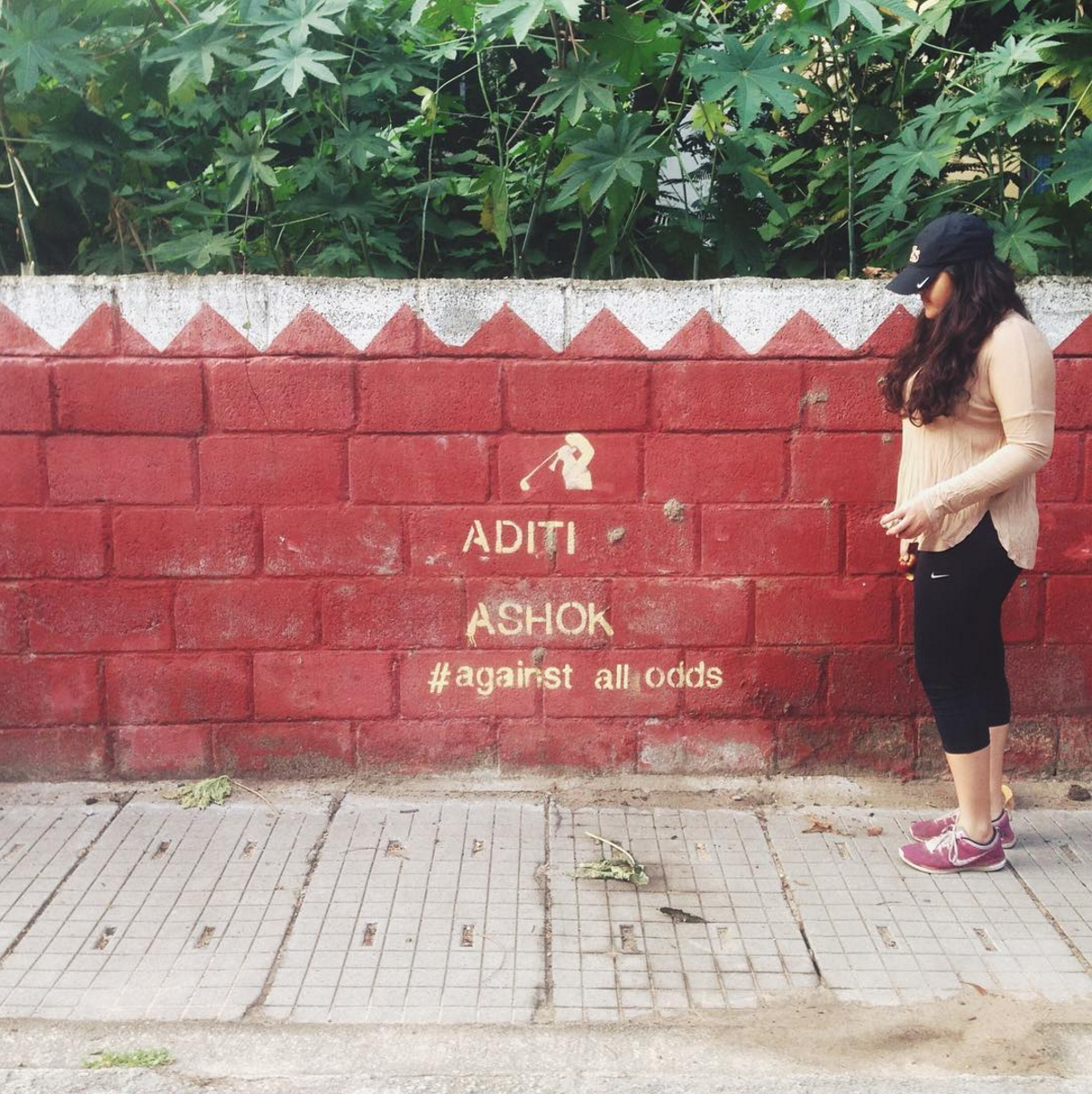 The Rio Olympics may have ended, but two young women in Bangalore have been keen to remind everyone of the superb achievements of the Indian women athletes who competed there. Early mornings, while most of the city sleeps, they’re furiously painting on walls, putting up images of some of the sportswomen who went to Rio with the hashtag AganistAllOdds. So far, they’ve spray painted the names of Dipa Karmakar, PV Sindhu, Aditi Ashok, and Lalita Babar on Church Street, Lavelle Road, MG Road, Hosur Rd (Adugodi), on 12th main in Indiranagar, and even one on their way down from an impromptu trip to Nandi Hills. They also plan to include the names of other female athletes who haven’t gone to Rio.

These two young women, who wish to be known simply as AR and KM, spoke to us about their fascinating project. Here are edited excerpts from our conversation:

Tell us a bit about yourselves and how you came up with the idea for the graffiti project. What started it all?

AR: Having come home from the US, and really seen what “doing sports” meant there, the level of support, time, coaching, space that these players are given, really put things in perspective for me. What made me really, really angry was the way most Indian newspapers reported on our athletes. With a sense of disappointment, or a “what more can you expect”. And what made me even more angry was how their tone would change dramatically at the faintest whiff of a win or a medal. 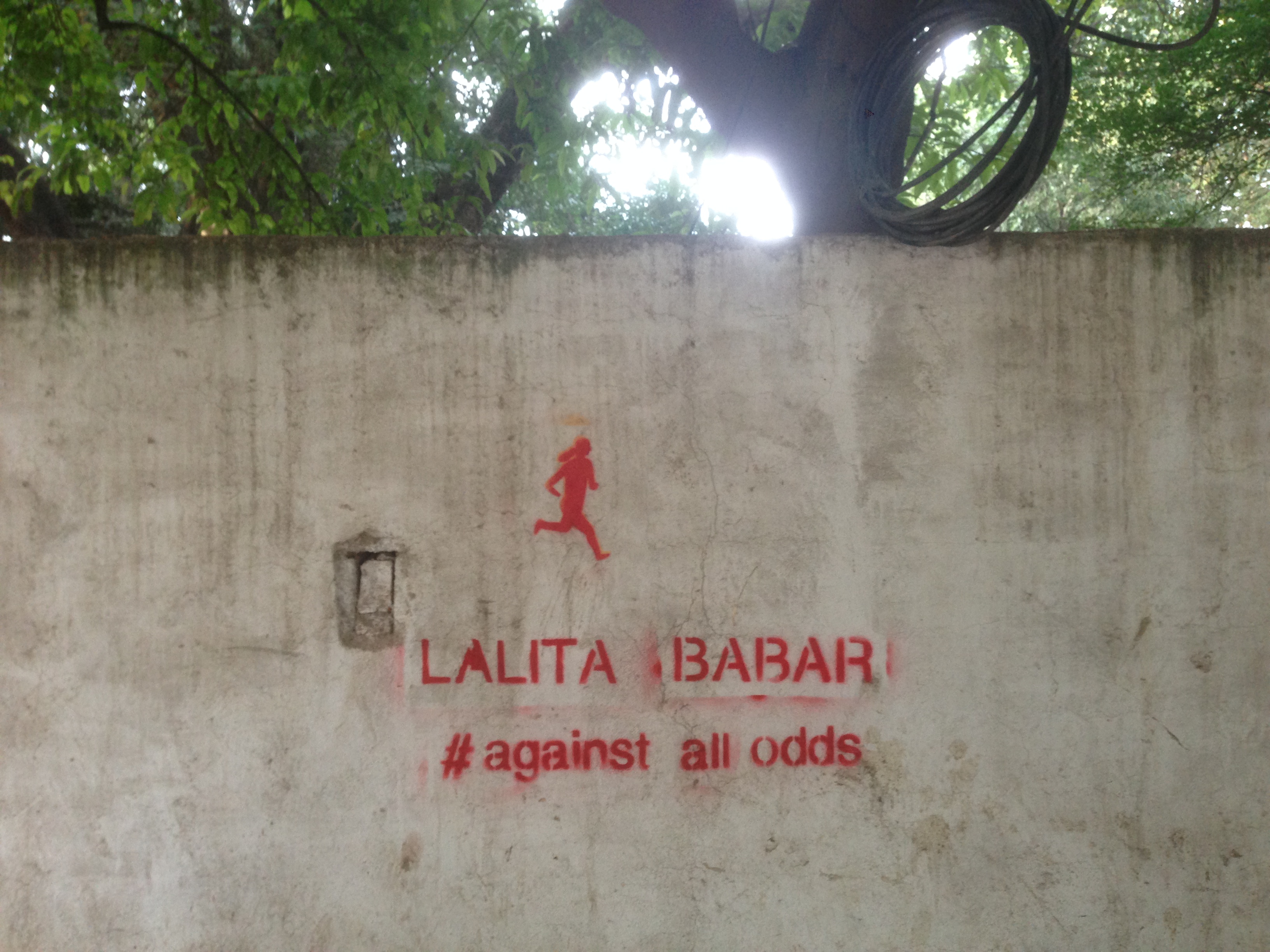 I was so awestruck by the level of commitment that these athletes had, something I never had the will and strength to do and this made my brain buzz with ideas while I already had a separate graffiti idea in mind. I wanted to reach out to people but I didn’t want it to be my opinion but focussing on their names and stories. I pitched the idea of the graffiti and the Instagram blog idli_special to K and she was super eager to go ahead with it.

KM: I’ve recently moved from Los Angeles to Bangalore for work, I do marketing for a sports company. Sport has always been a huge part of my life; I spent 6 years playing golf competitively here in India, and continued to play varsity golf for another 4 years at college in LA. A and I met recently through mutual friends and really bonded over the Olympics. As the Games progressed and we followed our athletes closely, both of us were frustrated at how poor the media coverage has been on them, particularly the women. To add to that, we read multiple stories about how little government support they received in getting to the Olympics. Overall, as a sportsperson, and just as an Indian, I was ashamed at the ignorance and lack of support toward these athletes. We had also simultaneously been thinking about spray painting the silhouettes for the MISSING campaign, so one night, amidst planning that project and talking about the Olympics, we came up with the idea to use the names and silhouettes of these athletes to express our awe of them and to celebrate their success — whether or not they won a medal. 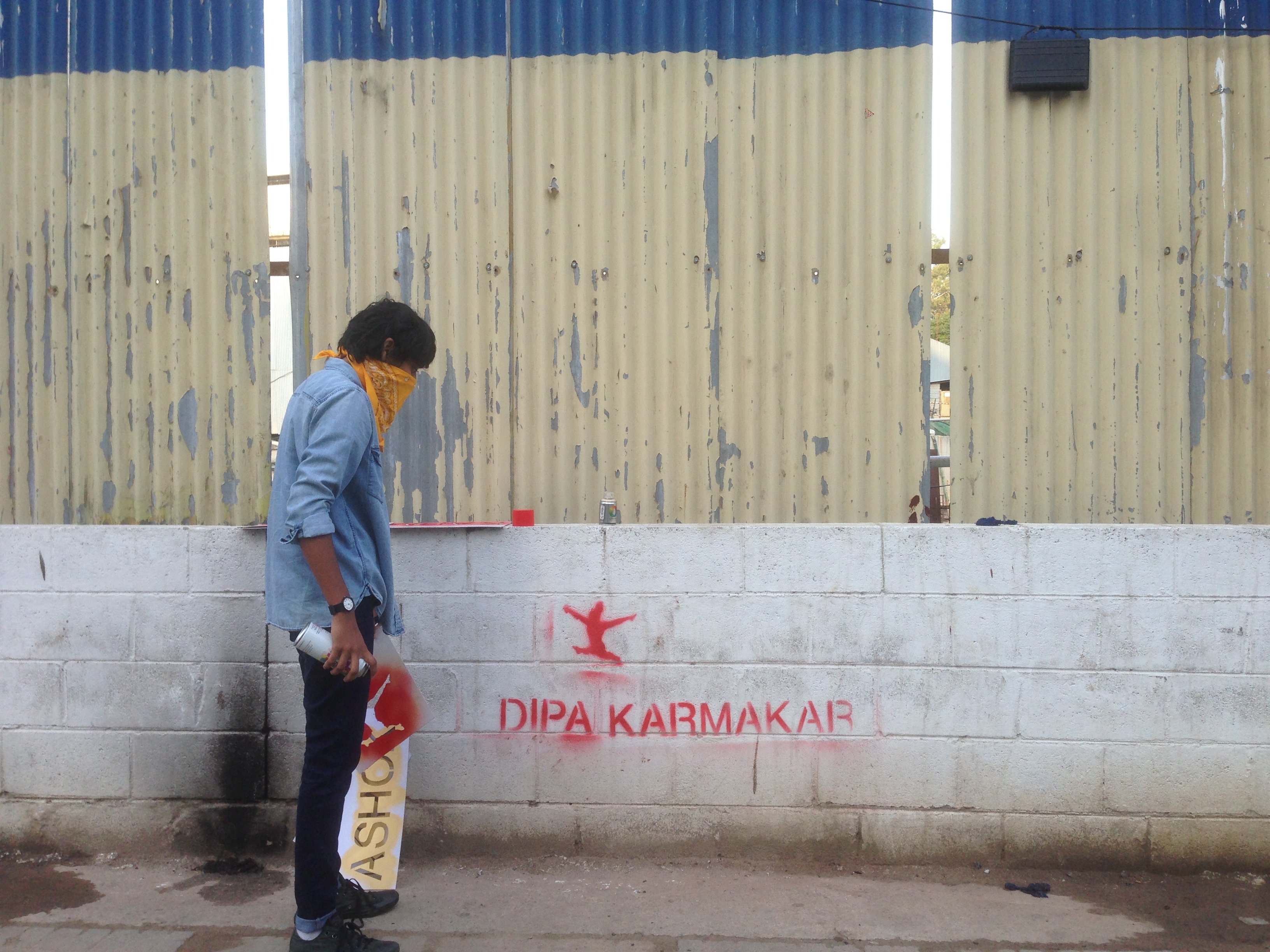 How have you gone about doing it? Do you do it at night, early morning?

AR: We’ve been making and using stencils for the names of the athletes and their silhouettes. It allows us to work faster and the lettering looks neater. We try to wake up early on the weekends at around 6 and aim for spots in town that have high visibility but are mostly deserted.

KM: Obviously we are aiming for properties that aren’t residential because vandalism isn’t our intention.

Have you had people spot you doing it? What has their response been like?

AR: The people who we’ve told have been excited about it and my mom also keeps an eye out for it. There’s a certain kind of delinquency to it in the way that we’re getting their names up in a manner that’s simultaneously silent, angry and proud. It also helps that it’s graffiti which has earned a rep of its own.

KM: Despite our best efforts to be inconspicuous (early mornings, bandanas, scarves, caps) we’ve been spotted by passers by who usually slow down and watch with curiosity. It’s been particularly interesting when we’ve been spotted by security guards; we always think they’re going to bust us but they just watch with mild interest. We have had a lot of autos stop and watch us though. 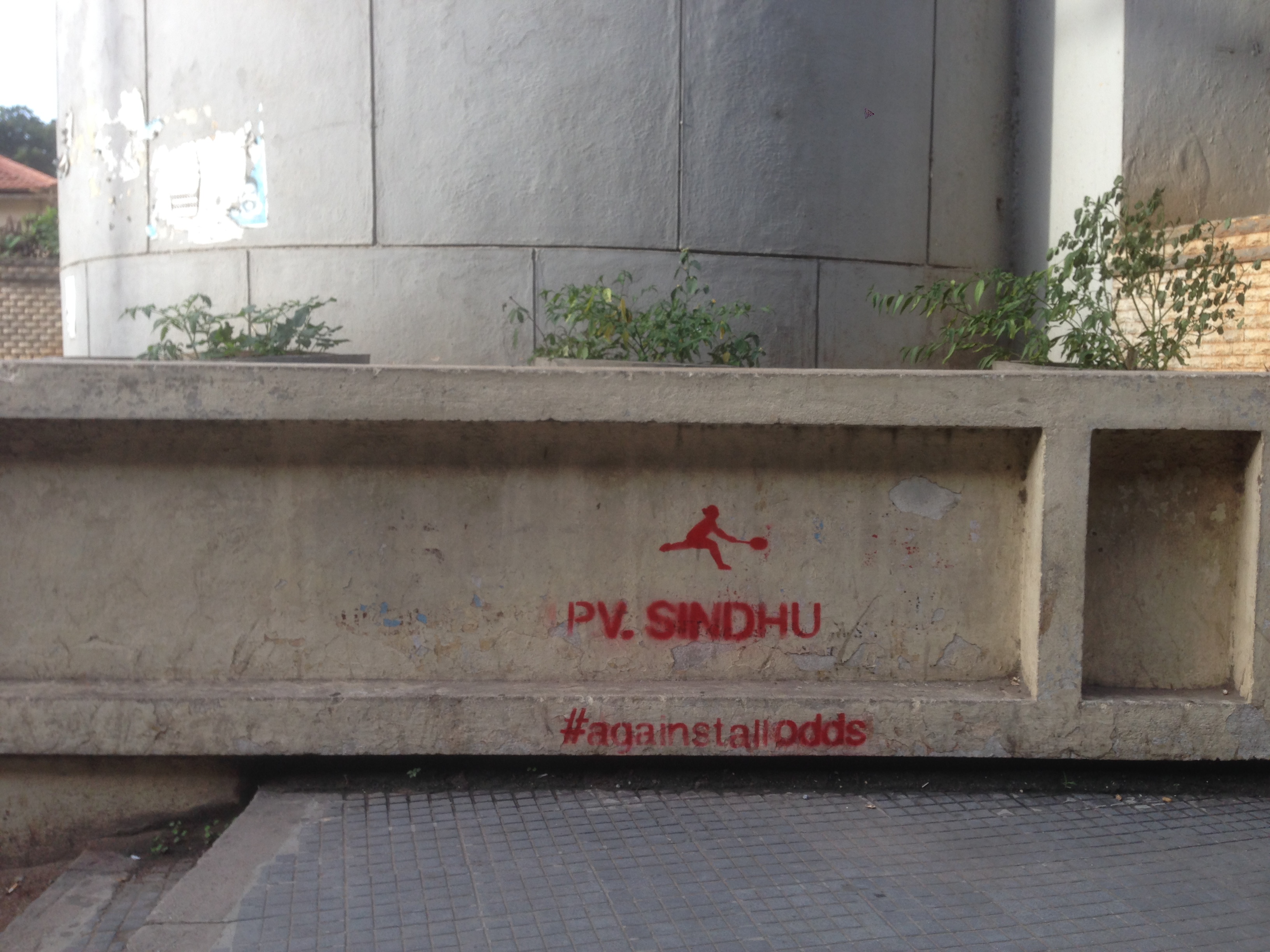 What do you hope people’s reactions will be?

AR: I hope people see their names. I don’t want to give people the chance to walk away from this particular conversation. It might sound aggressive on my part but I think it’s time everyone paid attention. It isn’t fair that we criticise our athletes to the extent that we do, and that we then shower, literally smother them with praise, money and worship when they do win. It’s a really strange system of extremes.

KM: We hope the silhouettes generate more interest in these athletes, which will eventually translate into more media coverage and thereby pressure on the government to provide better resources to them. The hope is that those who know the athletes will recall their talent and that those who don’t know them will want to find out. Personally, I also hope that it’ll raise awareness about the blatant inequality between men’s and women’s sport in India. For instance, most Indians now know quite a bit about men’s golf, but they’re only just realising that women’s golf exists in India too — all thanks to Aditi Ashok. It was thrilling to watch our country wake up and take notice of not just these women, but also these sports, and I hope that these silhouettes prevent both things from disappearing once the media hype dies down. We need to allocate more resources to women’s sports — if the Olympics has shown us anything, it’s that there is far more potential there than anybody realised. 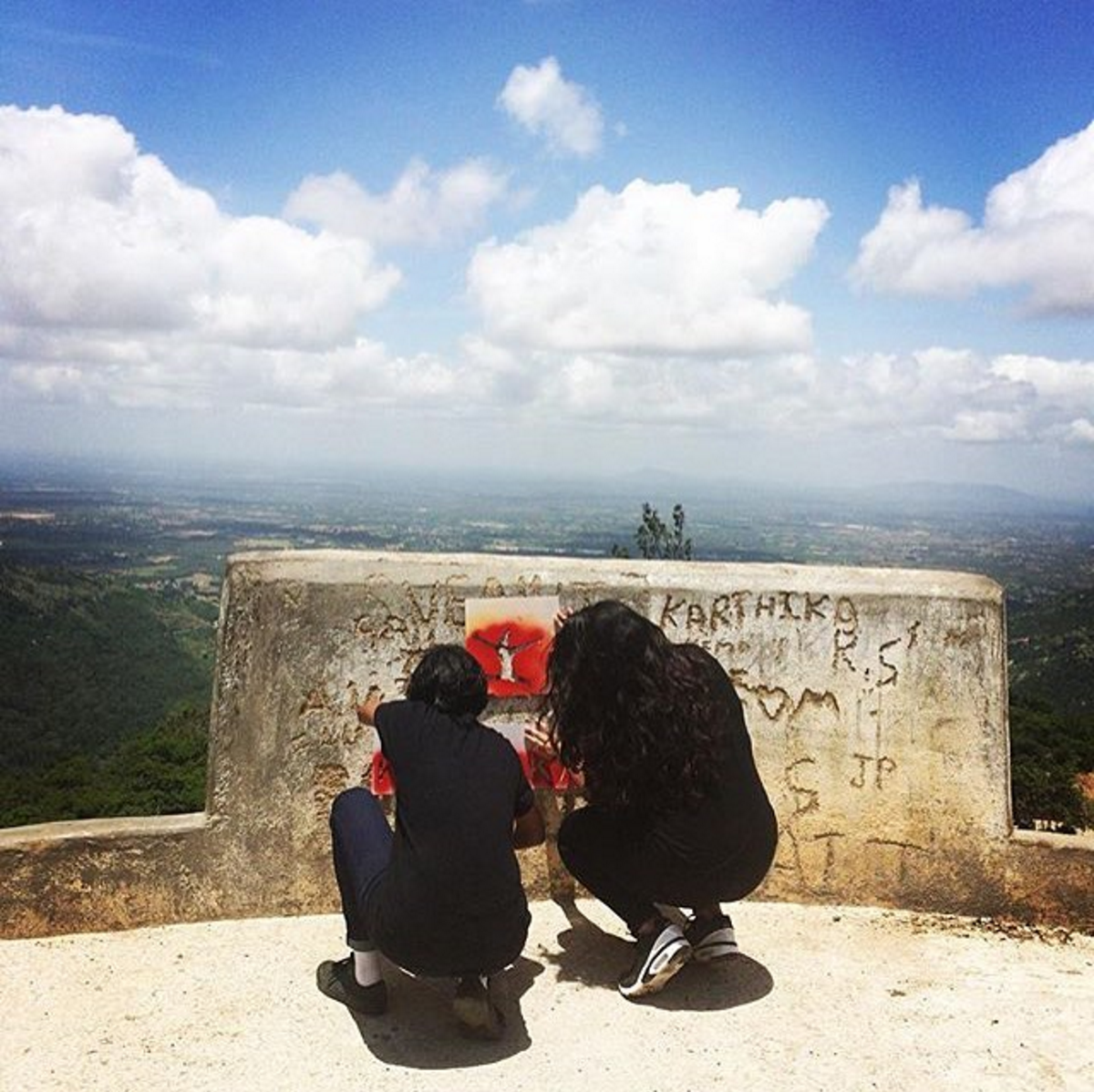 What is the significance of the hashtag #AgainstAllOdds?

AR: Athletics and sports demand grit, determination and extraordinary strength. Athletes from India have to possess all this, and then some. They have to deal with inadequate or unsafe training facilities, the bureaucracy of the Sports Ministry, a lack of financial support from the Ministry. And this doesn’t even cover the hurdles that our female athletes have to leap over (couldn’t resist that reference).

KM: It took us a while to nail this. We wanted something that would capture how much these athletes have struggled to get to where they are, all the hurdles the government has thrown in their path instead of enabling them. This hashtag is a way for us to recognise the sweat and blood they’ve put in to overcome all odds and to celebrate their success, whatever form that has taken for them.