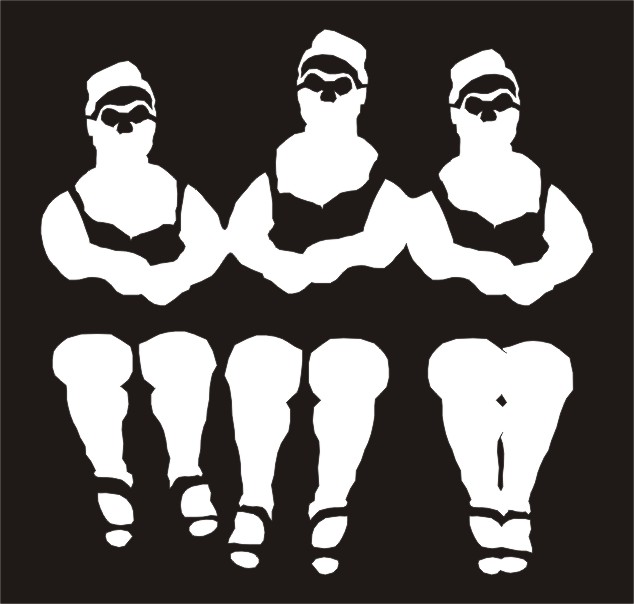 If I were to tell you the story of the women in my family, I would probably begin with Mouma and my aunts. My aunts are crazy in much the same way that aunts in most families are; and normal in a way that is still crazy.

When I was four, I would sit on Mouma’s lap with a glass of milk and refuse to drink it unless she showed me both her breasts. Soon, all my sisters started to demand this from her. We would sit around her smiling into our glasses of milk and wait for her to pull her breasts out. She must have been special because none of the other grandmothers did this. I think this is because she had lost her husband when she was rather young and not having a husband around makes old women very cool.

That’s the grandmother I remember. The other version of her is who she became when she was around her children. She had six; two boys and four girls. If I ever live to grow that old, I hope I inherit her madness. One morning she woke up having dreamt that the gods in Banaras were calling out to her. She demanded to be taken there right away. My mother laughed in her face and refused. It gave me an oddly primal pleasure to watch my mother being first blackmailed and later bullied by her mother to sponsor the Banaras trip.

Her extortion attempts are always successful because she threatens to go live with her children for ‘a few weeks’ if they don’t give her money. She knows that talking about coming to their houses means threatening them, but it doesn’t make her sad because she makes a fortune out of it. When news of her arrival rocks the first floor of my house, the ground floor shakes with disapproval. Guestrooms are reorganised, undergarments are hidden inside lockers, bags are folded and kept away, and all the riches– shopped for carefully in various exhibitions – are stripped away until nothing but the gloomy exteriors of concrete remain.

My Mouma, the bra-stealer, snoops around the house for bras and chaddis regardless of how much they are torn or where, to give them away to other poorer relatives. I don’t know what she tells them when she hands it to them. I wonder if she’d collected empty Jockey boxes in order to fill them later with my bras and chaddis.

For a long time, I looked for women I could be like. I looked for them outside and didn’t realize I had one right at home. She prefers travelling alone, and when she does, she travels in style. Hotels are booked months in advance, flight tickets are negotiated across two states – Karnataka (my mother) and Maharashtra (my Bombay aunt) – and cars are arranged. Failing this, she goes AWOL for a long time and resurfaces at random points with new handbags from wherever she went, but always smelling like vibhooti. Vibhooti, Marie biscuits and tea powder.

When I ask for stories about my grandfather, I am only given one– like all those times I asked for too many things as a child and was given just the one bar of chocolate. My mother says he knew when he was going to die and that he scribbled the date on a wall in the house. He had a hole in his heart and died on the date he said he would. Nobody had time to be amazed by either this or his death because he had left behind a mountain of debt. It fell to the eldest son at home to take care of that and his siblings’ education.

My mother says she owned only two salwaar-kameezes when she went to Canara College in Mangalore. She would wear each one every alternate day and her friends were kind enough to never ask her why. My aunts have always told my sister and me that we are lucky to be born rich because we don’t have to struggle with who’s wearing what. My Bombay aunt talks fondly about a time when the eldest sister would fold her favourite white salwaar-kameez neatly and put it under the bed to iron it and how one day, she–my Bombay aunt – sneaked into the room, wore it quickly and ran for her life for a family function that the elder one then couldn’t attend because she had nothing to wear.

Growing up, my aunts navigated our desires with feel-bad stories of poverty from their childhood. Every time we made a fuss about not being able to watch a Salman Khan movie first day first show, my Bombay aunt would tell us the story of how she rolled on the floor and wept until dawn because it had rained and flooded and they couldn’t catch Satte pe Satta’s last show in a broken theatre far away from home – so far that they had to change three buses to get there.

For a long time I didn’t know what my mother’s caste was. I knew we were low-caste but whenever I asked for the name, I was told it was ‘GSB’ (aka Gowda Saraswat Brahmin). I knew that couldn’t have been right because Mouma said it all too hurriedly, like she wanted to say it fast and get it over with, like she had rehearsed it so often and so well that it had seemed a waste to throw it at a family member, instead of at a stranger.

My mother on the other hand said it with a half-smiling, half-embarrassed look on her face. Once, I walked in on a conversation that my mother was having with Bubbly, my cousin.

“You should’ve told them no? That we are GSB.”

“I told them but they didn’t look convinced.”

“Next time just remember to say GSB before anybody asks.”

When I asked Bubbly about this conversation years later, she imitated my mother’s half-smile and told me that our ancestors were, for lack of a better word, “nachnewaalis” (dancers) and that’s why, collectively, they had all agreed on calling themselves GSB to avoid unpleasantness. Confused, I asked her why we had to hide it.

She said that that was because some of the nachnewaalis were also prostitutes. I was 23 when I found out about this and I remember how much this information cheered me up. I imagined myself stumbling into old account books of clients or some such in one of the rooms in our Mangalore house.

We watched Shobhana in Manichitrathaazhu one evening. All of us sisters huddled in the last bedroom where there was no sunlight and the air was thick with the smell of Kannan Devan tea. It was delightful to watch Shobhana finding jewellery in dusty old boxes and become Nagavalli. For days I was convinced that I had in me the spirit of my naachnewali-ancestress that Bubbly hinted at I explored all the rooms in a mad fervour to find old antiques/ jewellery/anything that looked like they didn’t belong in the house.

Sadly, all those rooms in our Mangalore house only had KannancDevan tea powder rag-bags and one big, red old-school weighing machine. My cousins Avanti and Bubbly knew their way around the weighing machine. I watched wide-eyed and thrilled at how they were able to use the correct weighing stones to weigh various things. I took a fancy to those weighing stones more than the weighing machine itself. My uncle kept that tea business for over five decades and continues to run it successfully. Even to this day, mother says she cannot stand to drink tea – green or black, the smell makes her nauseous.

Once, when we asked Mouma if ajjo was ever romantic with her, she hissed at us. She ignored my mother’s ‘Don’t listen to her’ – look and proceeded to tell us about Amuka – ajjo’s girlfriend. After that day, everytime I ask my mother to tell me more about Amuka, she gives me her shy ‘We are GSB’ –face and runs away.

My Bombay aunt and Mouma cannot stand each other because they are like each other. She is also among the few people I know who have all the reasons to be sad. She realised that her husband was an obnoxious person two hours after she married him. Theirs was an arranged marriage. He was loud and uncouth. Their kundli had predicted a blissful union. In real life, when she had to spend many nights outside the house after he had hit her and kicked her out, she pondered why their kundli had lied so blatantly. My Bombay aunt never left him. She is the happiest woman I know because she had watched and learnt what good wives do from far too many unhappy families and Bollywood movies.

Scooby was a stray dog that my Bombay aunt had taken in. He was a happy dog but ever so often he would get lonely, so he would lie on the sofa and look woeful. My Bombay aunt would feel physically violated if she ever saw that dog unhappy, so she’d give him pep talks.

“All the other colony dogs are jealous of you because you live luxuriously here with us. Don’t talk to them because they are all trying to usurp your position.”

My Bombay aunt and Mouma fight all the time. She knows that Mouma likes the other daughters more than her, but what pisses her off is that Mouma does nothing to hide this. More than once I have heard my other aunts ask her “Kasala Amma teshikarta, tee ve tugeli dhuv nave?(Why do you act like that Mother, she is also your daughter no?)”