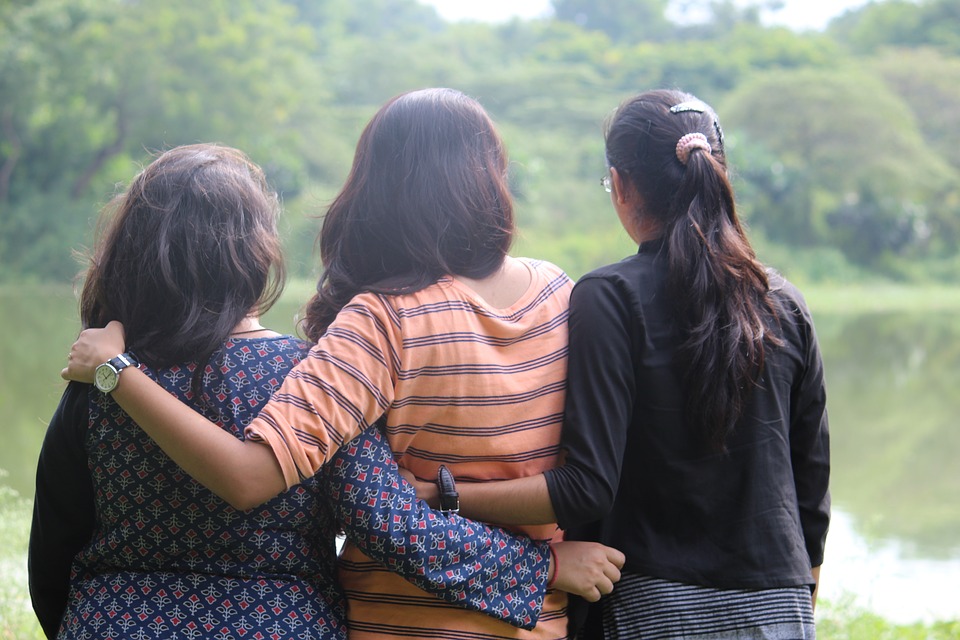 Sometime last year, I began to feel as if I was the only one making plans to meet a friend. More often than not, she wasn’t free to meet me. Whatever cut up feelings I had about this came to a head for me when she said she wouldn’t be able to make it to a play that I had a small part in. To me, it wasn’t simply that she wouldn’t be around for the play. It was the constant one-sidedness of it that had made my sadness too real to deny anymore.

In my own way, I decided to cut off for a bit and stop trying to make regular meetings happen. It helped with the pain I was feeling at the time. Things are better for us now, but I admit that they are not the same as they once were.

More recently, this friend (Friend One) became good friends with someone else who is also my close friend (Friend Two). Something about their new friendship was odd for me to process and I harboured my fair share of resentment about it.

As per me, it is likely that my feelings of loss at Friend One having not been around for our friendship as much have spilt over into how I see this new friendship between her and Friend Two (who I also have some unresolved old stuff not yet dealt with too, I admit). I felt weird about that level of closeness between them. In my mind, this was complicated further by the fact that I had been around first in both their lives – my sense of possessiveness acted up in new ways.
I began to think that I had a very real locus to feel bad and upset about two people being friends with each other in ways that are good for both their emotional well-being and health.

To some extent, I recognise that the act of gatekeeping in a relationship or friendship, for me, is symptomatic of a sense of loss felt with relation to the people I am drawing boundaries between.

Conflict within a friendship or relationship for me, manifests in the form of certain protective strategies. It is an indicator of a wound that was left alone till the point it festered, and there wasn’t nearly enough work done in processing the emotions felt around it.

As a result, the wound assumes a life of its own that leads to me making certain decisions about the way I lead my life. This is in large parts a mix of anger that has reached a level of (self) righteousness.

I don’t think I am calling this the correct or the best way to deal with something. But up until the time that my mind and body are taking the time they need to process difficult emotions, anger and boundaries, systems that stem from it can be important, if uncool allies. This is a piece about how this subset of protective strategies developed for me.

Over the last few years, my heightened discomfort at the colliding of friendship-worlds has made me question myself a lot. Is my sense of security really that scrambled? Deep inside, do I wish to be that person who stands between two people I know becoming close friends?

My mind attempts to thwart these thoughts by getting me to perform actions that will squarely put me in Best-Person-Wanting-Good-For-Everyone category. In my own way I have tried to trample past my nervousness and unpreparedness by introducing two friends to each other over email in the past. There was once an introduction where I harboured different kinds of hurt when it came to both people who I was introducing to each other and I still don’t understand why I did this. For younger me, this felt like doing the opposite of what my painful, unresolved feelings were allowing me to do. To me, this ‘good deed’ (I viewed it as such anyway) was my shortcut redemption past all the uncomfortable feelings I had about both people at the time.

If I did get hurt in the process of performing these moral Produnovas, then I wouldn’t give myself the space to process it. More often than not, I would attribute the resultant pain from these ‘good deeds’ to my Rorschach test result utterance,“as expected, you show a predilection for having problems in interpersonal relationships.”

More recently, I have come to view this diagnostic talk as best suited for doctors, not me. I have begun to view my own troublesome thoughts as valuable sites of resistance. They are, I tell myself, repositories full of tools that I can use to forge new ways to see the world and co-exist with it. Signals that ask hungrily and frantically for kindness that pushes me to seek and build context-specific problem-solving skills.

This involves radical acceptance of my feelings – acknowledging that having some of my (chequered and valuable) friendships blur into each other in ways beyond my control is a minor minefield for my mind is one part of this self-acceptance. To wit, I can’t deal and know that as just yet, I can’t.

A while ago, when my mind had gotten past the stage of self-flagellation at feeling these uncomfortable feelings, it propelled itself to the next stage of dealing with this problem in the form of a catharsis that led to creating a listicle. One, where I established what boundaries work for me and what really don’t, in the case of worlds colliding in cases where I have some baggage to resolve/process myself. Here is a mildly edited version of the listicle.

Things I am not good at and prefer to stay more than a barge pole’s length from:

This seems to be a gender-neutral quality, I don’t know if to feel relief or more aghast at my cagey, all encompassing territoriality.

I may feel and speak of good Samaritan-y intentions, adoration for persons who are polyamorous, a non-wife-beating Lennon’s Imagine world, but I treat the actuals with cat side-eyeing tonality. 6 degrees of separation is scarily close for me and I often prefer worlds not colliding.

A lot of this quite likely has to do with low self-esteem and an inability to see myself as whole growing up. As an adult, knowing that I am a shit person in some ways (like this) is important to me to know how far I am willing to go for people I love without harming myself.

Whoa. Self love as not meddling too much with your own grinchness. Hmm.

I can manage some level of world colliding, it’s not as odd as when I was younger. But don’t expect me to wing woman your meetings, your new friendship, your new secret language of person meets person = a romantic sparks session.

For good, bad, ugly, whatever reasons, I seem to have worked very, very hard at cultivating something resembling validation through my own friendships and physically, logistically, mentally, I have a limited bandwidth for this stuff. I can be kind but finitely so.

Do not think of me if you want me to set you up with someone. Unless I don’t know you at all/know you a little, know the other person a little/not at all. I’m rather good at storyesque, random acts of kindness for strangers, I can’t transpose these dynamics for closer friends though.

All friends, by when they are friends, are close friends.

Being intense was taboo in my undergrad days, years. But then, after a point you decide, yes this is me. It isn’t exactly great but this is what it is.

This whole, let us be perfect-person-who-is-best-person-with-lovely-intentions-and -heart-of-gold-stuff-and-all I can’t do. Sometimes this heart is like <insert clichéd black rose poem>.

This realisation of some part of my intrinsic not niceness has happened after nearly 2 years of trying to understand why my feelings are often like the roller coaster in Bangalore after it lost its license in the 90s.

I was talking about this to a friend the other day. I admitted that if other people acted the way I feel, I may not have ended up meeting people whose presence and friendship gives me life and anchors me to love and kindness.

For now, my listicle stands though, because being upfront about my problems allows for these difficult emotions to get real estate too. This way I’m no longer steamrolling over my own sense of self by constantly berating it for not being a good enough friend.

For me, this mini-manifesto lets me speak the words: I’m here, I have lots of feelings, tread softly and give me time to do my own thing.

Having a strong sense of boundaries like this, has its advantages. It means that there is a lot of awkwardness I don’t have to even try to process, I am kinder and gentler to my own self when I do feel that old discomfort creeping up again, I have carved a space for myself where I have earmarked something as needing work before life happens.

On the other hand, having boundaries this strong also means that a part of me remains rather fragile. There is still so much work that remains to be done. It means sometimes, walking on eggshells around well-meaning friends who sincerely don’t mean any harm and deeply care for me.

Where I am currently located, this severe lack of chill is something I am allowing myself. It did after all, happen after years of trying very hard to constantly be OK with anything that I didn’t feel ok about.

But once I do the work of processing my difficult feelings, I know that the expiry date on the strongly etched nature of my boundaries rulebook will have become long past. Then, it will be time to let myself open up in newer, messier ways again. Sometimes with surprising emotional skill sets present and sometimes, not. When that happens, I look forward to it with nervousness and excitement.