HomeWatchlistCinemaHere’s How We Wish Nil Battey Sannata Had Ended
April 25, 2016 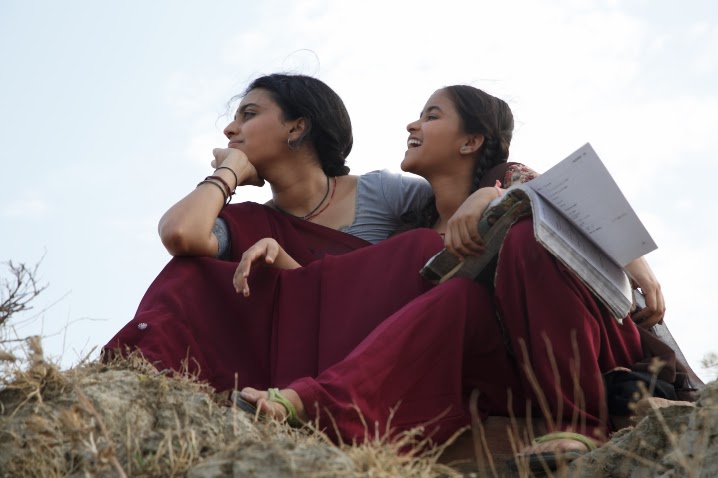 It’s hard not to love the first three-quarters of Ashwiny Iyer Tiwari’s film Nil Battey Sannata; it’s near-perfect. It’s a film about Chanda Sahay, a single mother juggling domestic work and other jobs so her 15-year-old daughter can go to school. Chanda has big dreams for her daughter Apu, and hopes she’ll go on to be a doctor or an engineer, not have to work as a maid like her mother. And she’ll do anything to make it happen – even if it means enrolling in her daughter’s class at school so she can learn the subjects for herself and coach Apu if needed.

Here’s what works so brilliantly for the first half:

1. Nearly every important character in the movie is female, even though this isn’t a film about “women’s issues”. It’s a film about the attempt to break free of poverty and class. There are no “women’s problems” here – no rape, no sexual assault of any kind, no men beating up women. Instead, we see women working hard, women enjoying themselves, having fun in little ways and bonding in scenes that ring wonderfully true, whether it’s Apu playing with the edge of her mother’s sari while trying to convince her not to join her school or dancing with her friends. (The saccharine camaraderie that Chanda shares with her employer, played by Ratna Pathak Shah, we hope, exists in a household or two in India outside of wishful thinking). 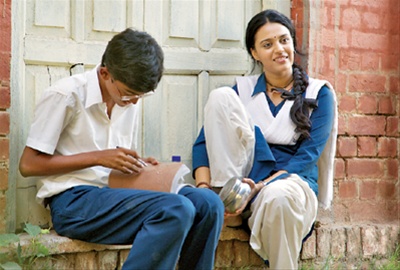 2. Swara Bhaskar, who plays Chanda, convincingly portrays a woman who will go to any lengths to ensure her daughter has a better life. What does it mean that Chanda has no bitterness or resentment in her, particularly when working for a hopeless upper-middleclass woman who doesn’t seem to do anything for herself, including oil her own hair, paint her own nails, or put on a sari? It’s Apu – a child growing up in a materialistic world who is resentful of their poverty, and of their “place” in life, and doesn’t seem to want to make an effort to break free of it. Apu wants nice clothes even when her mother cannot afford it, and takes for granted the carefree childhood that her mother protects for her so fiercely. The film doesn’t seem patronising about their poverty, and doesn’t seem to see working as domestic help as being something to look down on (more on this in a bit): Chanda and Apu are fascinating, multi-dimensional characters with wide-ranging interests. Chanda watches TV and likes the occasional chowmein treat to celebrate happy events, and leads a happy, though not easy, life with her daughter. 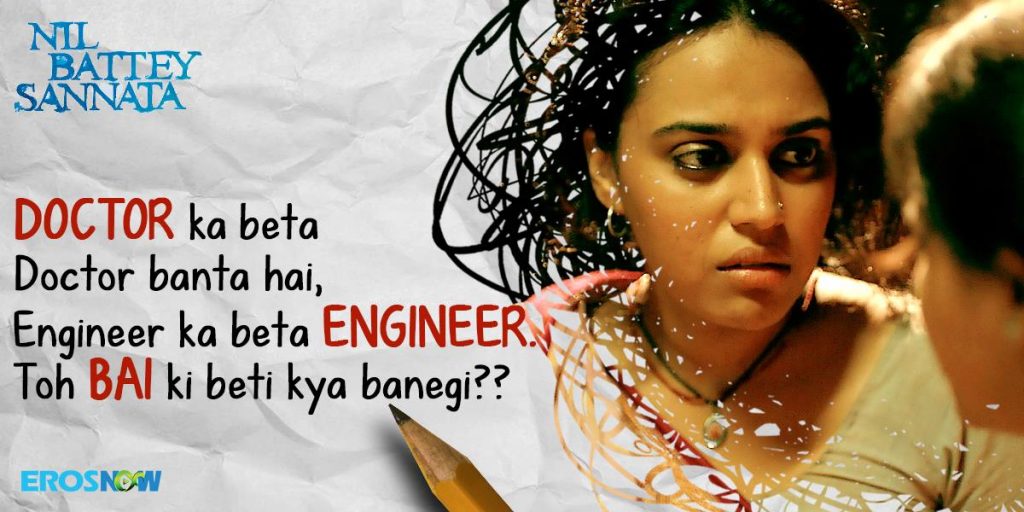 3. The scenes between Apu and Chanda are sheer genius, capturing a 15-year-old’s swings between intense affection for her mother and malevolent rage. Apu’s intense embarrassment at having her mother attend the same school feels so real – she is, to a large degree, a spoilt child, and all her whining and her attempts to manipulate her mother in order to have her way are spot on. Apu also knows exactly what will wound her mother – all the little things that will wind her up – and does her worst right when her mother is most vulnerable. It’s their relationship that’s at the crux of the movie, and it’s easily the best thing about the film.

4. The ridiculously charming school headmaster (played by Pankaj Tripathi) is one of the film’s warmest side characters (besides being the only male character with more than a few lines to say). He can be horrible when shaming his students for not being bright, but his idiosyncrasies and PJs in the film are matched only by his genuine affection for his students. 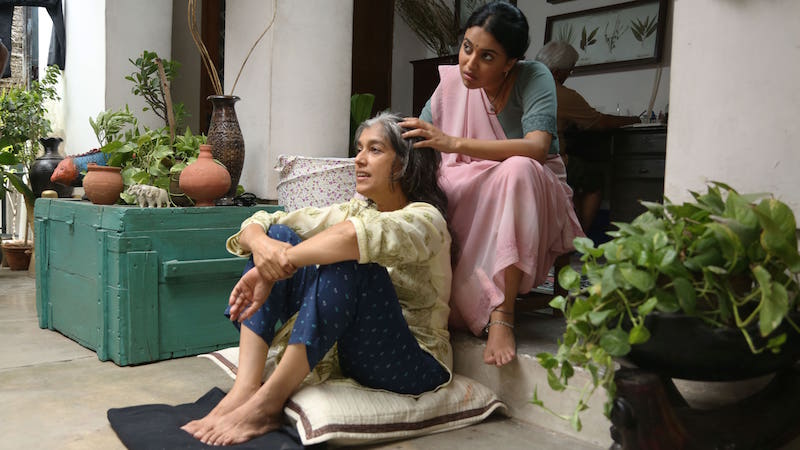 Okay, okay, it’s time to come clean. Nil Battey Sannata is only near-perfect in the first three-quarters or so for a reason: there is the occasional bum note, like Ratna Pathak Shah declaring maths the “purani dushman” of womankind – a vaanthi moment if there ever was one. But I also say first three-quarters very carefully, because there comes a moment when the film appears to screech to a halt, exit stage right, climb a building and take a flying leap off it to end with a splat in the most annoying way possible.

In one of the most unconvincing scenes in the film, towards the end, Apu goes from being an intolerable teen unconcerned about her future despite her mother’s slogging for her sake, to suddenly realising how much her mother has sacrificed for her. Apu goes from brat to adarsh balika, and the film ends with a long and boring speech from a worldly-wise Chanda about dreams and hard work and success. Chanda spent the entire duration of the film worrying about her child’s lack of ambition – the fact that while Chanda had great dreams for Apu, the girl dreamed no dreams for herself. At the end, during the big bhaashan, she tells Apu that she has to dream for herself, and that all she needs is her dream, and hard work will get her to it. The movie ends with a grown-up Apu sitting for her IAS interview, studious and successful. And then comes a slide, as a sort of postscript, with the text:

For God’s most beautiful creation:

Cue wave upon wave of vaanthi.

In a film that worked so hard to capture tiny nuances that gave colour and life to its characters, it’s hard to stomach the abrupt flattening out of people and plot in this strange descent into mother-worship.

The movie throws around the words “sapna” and “mehnath” as if they are the only ingredients required for success, with only a very brief reference to “kismat”. There’s no talk of caste or indication of structural inequality here. Dream big, work hard, and you’ll make it, is the film’s message. It’s all up to you. Coming as it does just months after Dalit student Rohith Vemula’s suicide – and his letter, which indicated no shortage of big dreams, but tragically showed how large an obstacle caste can prove to achieving one’s goals – it feels cruel.

In the end, Chanda’s life and dreams are steamrolled into being only for her child. Chanda sacrifices her time, her dreams, her energy, her health, all so that her daughter – sullen, stubborn, a terror at times – can have the best. By the film’s end, it’s clear that it does look down on the work that Chanda does. And Chanda, who’s present through nearly all of the film, is missing from its triumphant ending, invisible in her daughter’s moment of success even as she’s being revered in the postscript.

Considering Chanda takes the enormous step of enrolling in school to sit for her 10th standard exams, and the bulk of the film shows her successfully wrestling with trigonometry, if only she had continued to study. If only the film ended with her leaving her job with her posh memsahib (and the garment factory and the dhaba and the million other places she seemed to work at through the day) and moving on to something exciting, something new, something different entirely – charting an amazing course not just for her daughter, but for herself. What a perfect ending that would be.