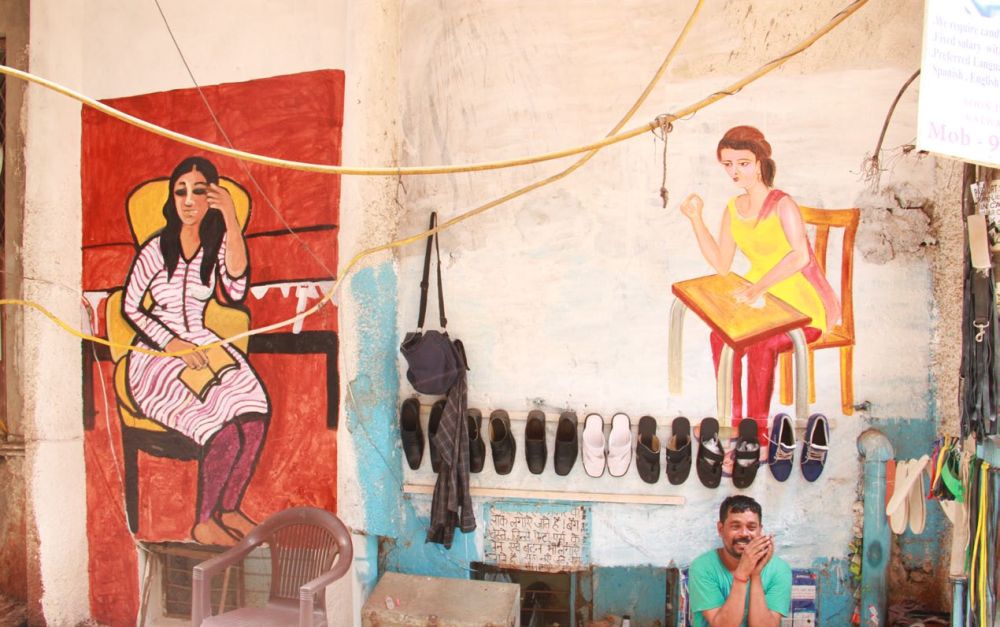 Update: On Sunday 15 May at 5.30pm at Khoj studio, S17 Khirkee Extension, New Delhi, you can join a walking tour of these wall paintings.

When artist Sreejata Roy, along with a group of girls and young women from the Khirki area in New Delhi, painted the wall near a basement chai shop in their neighbourhood, it set in motion a chain of events that they didn’t anticipate. The painting itself was rather spare: seven girls clad in white salwar kameezes sitting on a bench, chatting with each other and sipping tea against an ochre background. But as mundane as tea drinking seems as an activity, it wasn’t a depiction of reality that the girls were painting but an expression of desire: they were portraying what they couldn’t do in the neighbourhood, but dearly wanted to themselves.

The basement chai shop itself, like much of Khirki and Hauz Rani’s narrow lanes, is an overwhelmingly male space, where women are unwelcome. And when the women began painting, those in the shop were reluctant to have them around at first. But this slowly began to change. One of the customers at the tea stall remarked that it was interesting that “the human beings painted in costumes looked like women, not like men”. Women socializing in a public sphere, over the simple act of tea drinking, had only just begun to enter his imagination. Other customers asked the tea boy whether they could bring their families along to the tea stall to have them painted onto the wall. And when the painting was done, Roy and Co. found that the tea boy had now assumed the role of both custodian and curator of the painting. 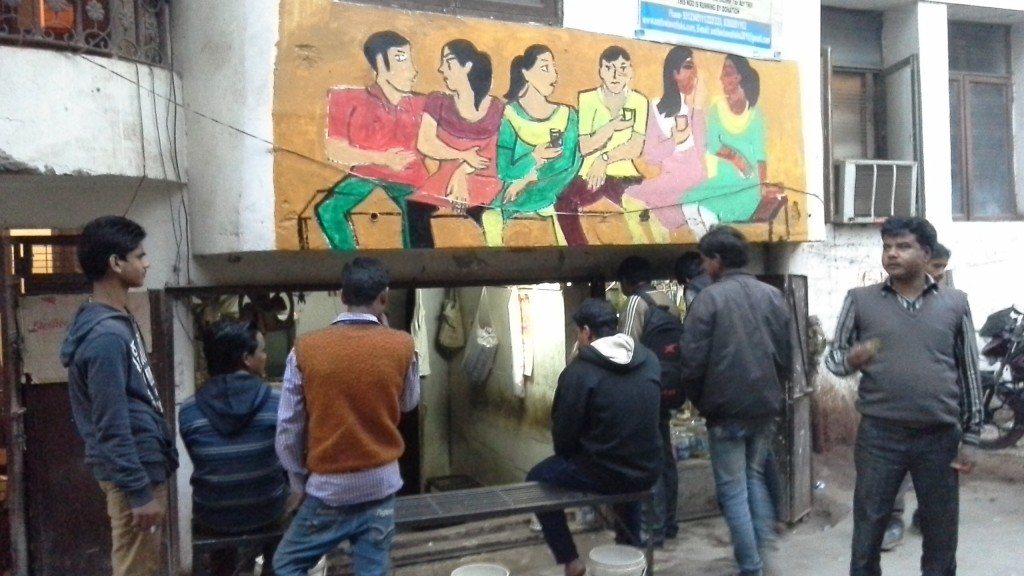 “It’s not occupying,” clarifies Roy. “It’s more like creating a space for women.” Perhaps with the chatty girls of the painting for company, women looking for a cup of chai will find it easier to approach the little tea stall. It’s already happened at the cobbler shop where, again, they painted women onto a wall. Over a row of shoes at shoulder height and the place where the cobbler sits are two large painted girls in bright clothes. One sits at a table, while the other holds a book open in her lap with one hand, and tucks her long hair behind an ear with the other. 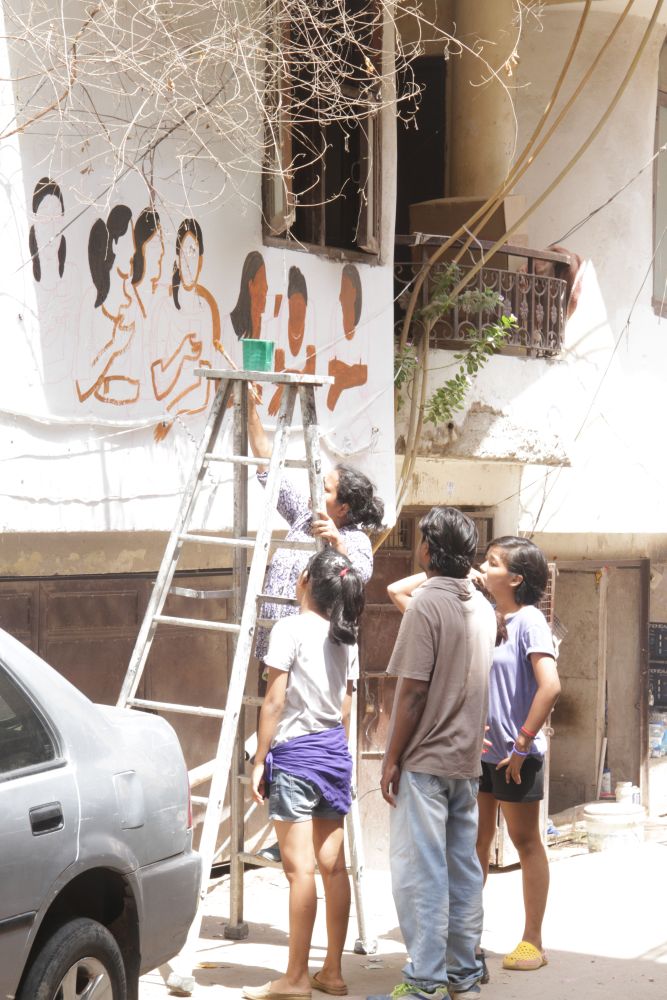 Initially, the cobbler would complain that the painters were getting in his way. They said they were decorating his wall, and would paint a signboard for him, which mollified him. When it was done, he would ask with interest, “Baaki kab karenge? (When will you do the rest?)” by way of invitation. “After the painting, we asked him what the reactions of the men who sit there were,” says Sreejata. “He says that all his customers ask him, ‘What is this?’ And he replies confidently, ‘Yeh kala hai. (This is art.)’ To which many respond, ‘Hope it doesn’t get damaged here.’” Before the painting, his only customers were men. After the women were painted, he said, to his surprise, women would stop at his shop, giving him their purses to mend.

When women pass by, says Roy, they photograph the paintings on their phones. One woman who has a tiny laundry and ironing stall opposite the chai shop told Roy she felt happy to see women, even if only painted ones, among all the men around. She hopes that Roy will paint women around her shop too, so that even when she leaves in the evenings there will still be women there. 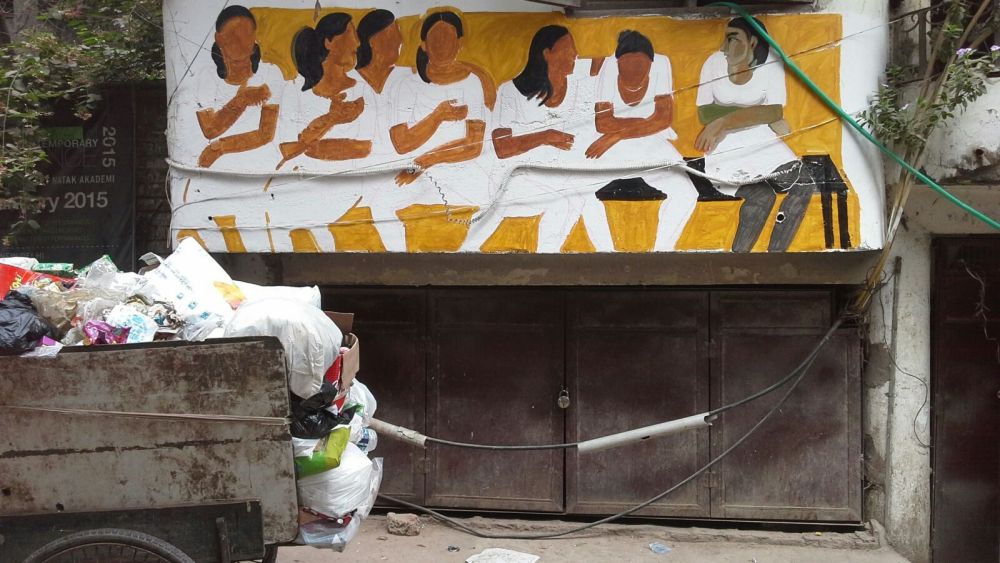 The Khirki area – made infamous by the former Delhi Law Minister Somnath Bharti’s racist attack on a group of African women in 2014 – is a melting pot of cultures that houses migrants of different communities, religions, ethnicities and nationalities. Roy, who works at Khoj International Artists Association, also based in Khirki, is working with her partner Mrityunjay Chatterjee on a year-long community art research project called Networks & Neighbourhood that ends in April 2016. Although Roy has worked on public art projects before, she says, “Here it’s much more complex. Because sometimes I’m an artist here, sometimes I’m a social anthropologist, sometimes an ethnographer.”

The subject of the paintings arose out of conversations with girls from the neighbourhood. Roy asked them, given the chance and without restrictions, what would they do for leisure? Some of the answers included playing football in gullies, roaming around in shorts, drinking at chai stalls, roaming with friends, including boys, loitering, and riding scooters with boys in the pillion seat.

The wall paintings are only one part of the project, which also involves a recently-launched monthly women’s magazine in which local women share their thoughts, with advertisements from neighbourhood enterprises run by women; workshops to create maps that indicate places for leisure or socialising (currently restricted to beauty parlours, hanging around vegetable carts in the evenings, or building stairwells) and facilities relevant to women. 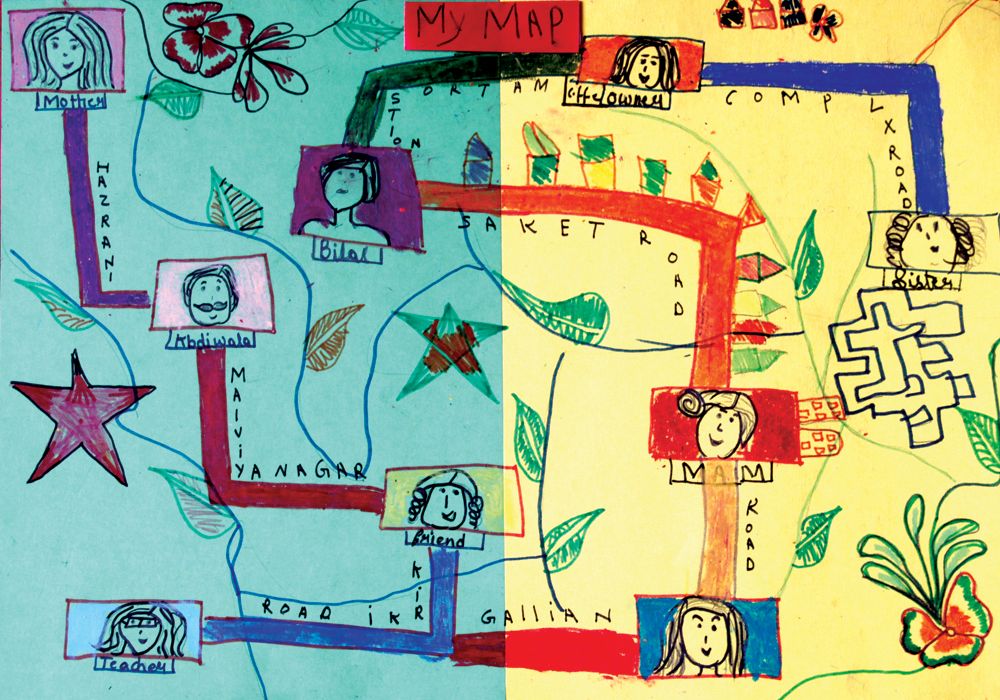 Soon, they will also plan events throughout the neighbourhood’s lanes and bylanes, including performances, walk-throughs, and even a cycle rally, to open up these spaces to women too.

Meanwhile, the newest painting by Roy’s team is on the other side of the chai shop, and it doesn’t just have women in it. This time two young men sit amongst them – shoulder to shoulder, thigh to thigh.