HomeCultureWanna See a Woman Play a Man Who Plays a Woman?
July 4, 2016

The first time I watched Anuja Ghosalkar’s play, Lady Anandi, I was standing in the middle of a crowd in an almost dark room at Gender Bender 2015, in Bangalore. I could only see Ghosalkar sitting down somewhere in front of me, occasionally clapping to signal when she wanted the lights to be dimmed or brightened, but I remember just staring at the man on stage in a red sari and blue blouse looking tiredly into a mirror with yellow lights on its frame. Salmin Sheriff, who was playing Madhav Rao, a Marathi actor known to play female leads, was holding the sari in his hand, when a young woman, Indumati, came back stage to tell him how much she admired his acting. Seeing a balding man who tells her to write letters and asks to be loved for himself or herself, Indumati leaves quickly, shocked and disgusted. Next to me a woman sighed, and a young boy in front of me looked uncomfortable.

Lady Anandi is a documentary theatre performance written and enacted by Bangalore-based theatre person Anuja Ghosalkar. This was the debut performance of Drama Queen, the banner under which she performs. Ghosalkar uses a series of photographs and stories she has collected and some that she has created, to tell the story of her great-grandfather Madhav Rao, a Marathi actor who played the roles of women, like that of Lady Anandi. Not only is the play a personal attempt to find her great-grandfather, but in the process, it is also about herself, a woman in theatre. 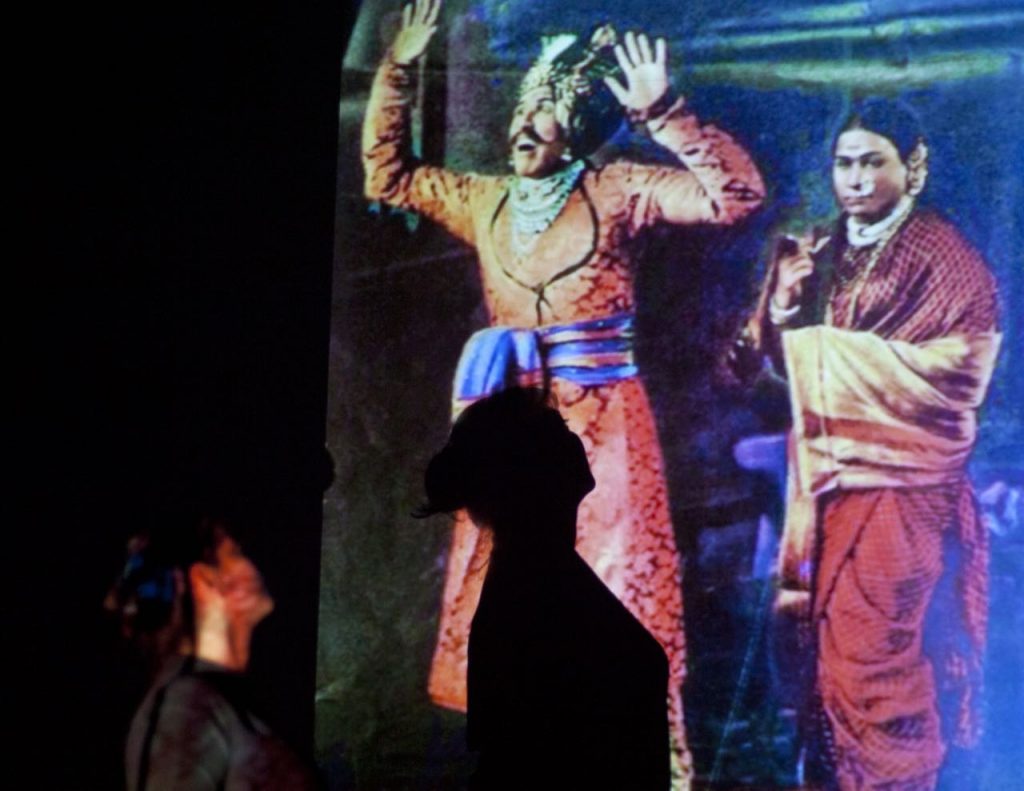 From what I remember at Gender Bender, the play moved quickly between scenes, events and time, but Sheriff, as Madhav Rao, moved slowly. A few days ago, I watched the play again more than a year later at Rangashankara in Bangalore, and this time too the stage was similarly lit, with the mirror and yellow lights, and bangles on the red mat on the floor. But this time, the same scene was enacted by Ghosalkar alone – she played Madhav Rao, and she played Indumati, shifting between their two positions with her voice deeper when she spoke as Rao, and happier as Indumati.

The show at Rangashankara is the first time that the play has been performed at a proper theatre – according to the leaflet we are given before we enter and are told to please switch off our mobile phones, the play has so far been performed at alternative spaces in India, like a 135-year-old brewery, a basement, and an office under construction. As Madhav Rao, Ghosalkar would stand in front of old photographs of her great-grandfather that were projected onto a screen behind her, and imitate his expressions and the way in which he stood when he played a woman. When he played Lady Anandi, who changed an order from her husband, the king, to have his brother killed instead of caught, the woman in the photograph is in a red silk sari with shimmering gold, standing with her knees bent, her shoulders hunched, and she is staring in the way that I have always imagined Lady Macbeth’s eyes to have done when she calls out to be unsexed. But it is also the same expression that I imagine on the young Madhav Rao when his uncle tells him he can go back to wrestling and school after a few shows, and drapes a sari around him for the first time, transforming him into Lady Anandi, telling him to practice walking along a chalk line that he has drawn across the floor, and saying he must walk like a lady, a real lady. 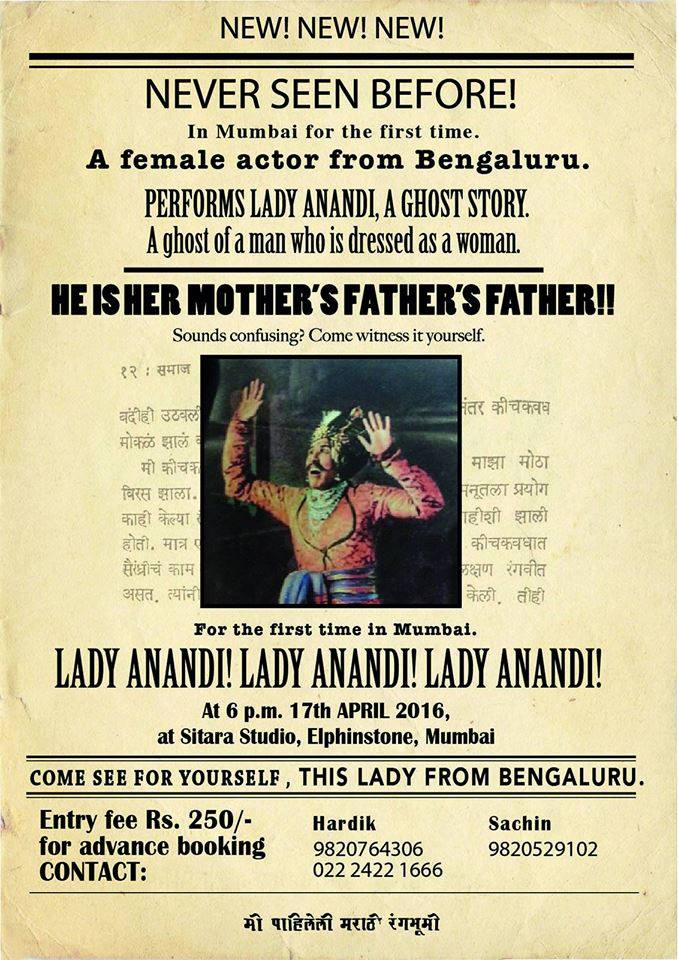 But what complicates the situation is the woman Ghosalkar (who is called Lady F when she is herself, whose great-grandfather is Madhav Rao), acting as the man Madhav Rao, who acted as the woman Lady Anandi. The only idea we ever have of Madhav Rao is through Lady F and how she sees him, both as an actor, and in relation to herself, but at some point, these stop being distinct things. This idea of how gender is performed becomes stronger when there is only one person acting, because now that one person is everybody – a woman, a man, a man playing a woman, a young girl, a married woman, an admirer, and a young girl in love with a man who acts as a woman.

For instance, Lady F is a 33-year-old actor who remembers being on stage when she was five, playing the role of the letter M from the word Christmas in a school play. M was for Mother, who made the food on Christmas – I was supposed to be Virgin Mary, but I couldn’t sit still, Lady F says. In Gender Bender, the role of this five-year-old child was played by a young girl who was always caught between voices that told her to wear pink and not blue, to sit with her legs together, and to not stare. At Rangashankara, Ghosalkar acted like her five-year-old self, complete with the high-pitched voice and enthusiasm, and I could imagine her hair in two swishing ponytails as she shook her head. Lady F, when she is older, is also the woman who is told she must be a certain way to land the roles she wants — the woman she is told to be is like the woman who Madhav Rao was told to act as when he first began.

At the end of the play, which Ghosalkar presents as a work-in-progress, the audience is invited to ask her questions or give their comments, and those that came up in Rangashankara seemed to only begin to hint at gender — they appeared more interested in Madhav Rao, the process of finding information on him and what that meant to Ghosalkar, and were curious about theatre as a market. I thought it was strange, not only because Ghosalkar and her great-grandfather had seemed to stop being two different people, but because the women in the play are the ones who are always doing things that aren’t in keeping with the knees bent, shoulders slouched, back hunched image of a woman that we are constantly reminded of. Lady F is imagining and enacting her great-grandfather from the stories she has heard and the few news clippings she has found; Malati, who Madhav Rao marries, runs after his cart and tells him she doesn’t like history when he tells her grandly that he is acting in a historical play; Lady Anandi changes her husband’s orders to get his brother killed, and Lady F puts on a moustache like the one that Madhav Rao had, declaring slowly and purposefully that she loves thick, hairy moustaches.

In the last scene, Lady F is standing in front of quickly changing photographs of Madhav Rao, but we can see little of him with her standing there. She stands still for a long time, and when she walks away, the photograph on screen is now one with her shadow blurring out parts of her great-grandfather – another will come, we hear someone say. Ghosalkar is now everybody in the play, woman, man, man as woman, and we can no longer tell which.