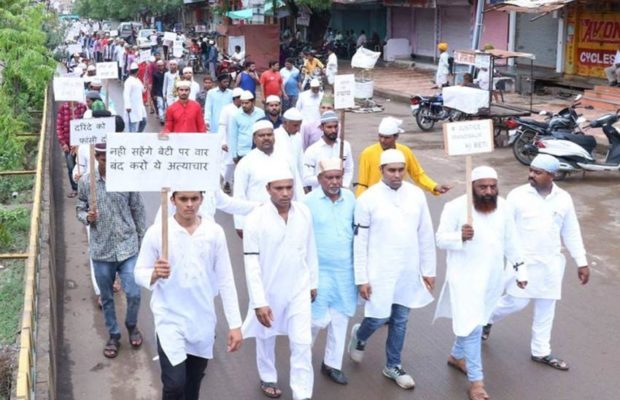 Word has it that Amit Shah has instructed the BJP’s digital team to spread like fire before 2019. According to the report by The Quint, Shah has asked his social media volunteers “cyber warriors” to spread like fire from Jammu and Kashmir to Kanyakumari to ensure party’s victory in the 2019 Lok Sabha elections. Someone should tell him to save his money, fire-spreading is well underway and as usual, the first victims are women and girls.

Today in Kashi, had a wonderful interaction with our Social media volunteers of @BJP4UP. Have asked them to widely share the several transformative schemes and path breaking initiatives of our state and central governments, which is meant for each & every section of the society. pic.twitter.com/fNS03ADaQz

(Is it a coincidence that from the photos that were made available from the  Twitter  handle of BJP President, there are hardly any women seen in his “cyber warriors” troop.)

Unless you have been living under a rock, by now you know that on 26 June a 7-year-old girl in Mandsaur, Madhya Pradesh was brutally raped. Her two assailants found her while she was waiting outside school for her father, raped her, cut her throat and left her to die. Miraculously, the child survived and was found the next day. She is still in hospital undergoing treatment.

For the people who found it difficult to process that the violence against the eight-year-old victim in Kathua was prompted by her identity, this gruesome attack became an easy citation for Whataboutery. Because neatly the survivor is a Hindu and the two accused are Muslims. Why aren’t celebrities supporting ‘our’ girl when they supported ‘their’ girl and so on?

While it is wholly possible that the child, in this case, was also a victim of her identity, it also seems an easy and amoral direction to take the discussion. On the other hand, for people feeling personally attacked by the notion that India is unsafe for women and/or people who feel personally attacked by the idea that women of minority and marginal communities face greater violence, no case could be a greater balm. So it isn’t surprising that the Mandsaur survivor has an unexpected set of ‘supporters’. Yes, all of this is tiresome and predictable and helps the Mandsaur victim as little as humanly possible. But hadn’t stepped into the realm of cray-cray yet.

You know what is cray-cray? Manufacturing false equivalences wholesale. Are you saying the what?

In the Kathua case, lawyers attempted to prevent the police from presenting the charge sheet in a local court. When that didn’t help, the lawyers of Jammu High Court Bar Association (JHBA) called for a bandh in the Jammu region. Not only did the lawyers shamelessly tried to save the accused, but the netas of our country too contributed to it. BJP leaders like Lal Singh Chaudhary and Chander Prakash Ganga were a part of a protest carried out by a group called “Hindu Ekta Manch”. The on-going unrest was not enough that the leaders, who are a part of the Centre decided to side with the accused due to the religion he belonged to and join the protest. However, they were not the only netas who were backing the accused. The Prime Minister’s long silence just led people to communalize the entire rape case, sidelining the victim.

Because it is necessary to carry out this hallucination of equivalence to its full loony extent, the Hindu right-wing decided they needed to produce false evidence against the Muslim community to play their part on this case too. Which is exactly what happened.

They even added a picture to prove that the Muslim community was supported the accused and this message with the image was spreading like Amit Shah’s favourite wildfire on Facebook and Twitter. 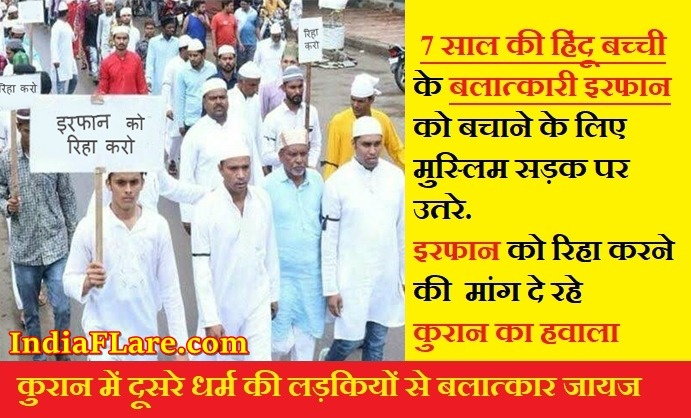 However, the truth of the matter was, this image was deliberately photoshopped to propagate hatred. This is the original picture of the Muslim community protesting against the people who do such heinous crime and get away with it. The rally conducted was in support of the victim and asked the government to give the accused a tough sentence.

In the meanwhile, the eight-year-old survivor has pulled through. The doctors expect her to be discharged within two weeks. One report quoted VS Pal, superintendent of the hospital where the survivor is admitted as saying, “The girl is out of danger. Her condition is continuously improving.” The report added that she is conscious and talking to her parents. She has also had to survive incidents such as a nurse trying to take her photo and it is likely her future also holds further attempts to make her a useful statistic.

While in the photoshopped image the same placard read, ‘इरफ़ान को रिहा करो’ (Release Irfan). The text was changed in all the other placards and banners just to propagate this fake news and cause restlessness in the nation. The other placard originally read ‘दरिंदे को फांसी दो ‘ (Hang the beast) which was changed to  ‘रिहा करो ‘ (release him). Further in the background, next to the man who is turning behind, the words have been erased in photoshopped version and have used a cropped version of the picture.

It looks like everyone is lying but Indiaflare website, which, according to Altnews was formed just a few days back and their Twitter account too was made in June 2018. This site has been reported by many people, while the worrisome point is, their article has been shared over 20,000 times. Many such attempts have been constantly made by either political parties or just random people to play blame games and politicise a sensitive issue such as rape. The site wants answers like why there is no roar like Kathua case? And conveniently arrived at the point saying ‘since the victim is Hindu’. Cut out the BS Indiaflare, rape is not something you want to rub your ego and your communal hatred into.

It is more about the victim than what religion she belongs to and an accused is an accused, not a preacher of any religion. So, stop propagating hatred and spend your money on getting therapy than making a fake website.