In 2007, Mumbai-based filmmaker Paromita Vohra’s documentary “Morality TV aur Loving Jehad: Ek Manohar Kahani” was the first to note the beginnings of the ‘love jihad’ discourse that has since been growing like a parasite on India’s cultural and political zeitgeist. The film that writer and critic Shanta Gokhale says made us “laugh at our cultural hang-ups while feeling frustrated, angry and horrified at the same time,” won Best Short Documentary at the International Video Festival of Kerala in 2008, and has since been screened at a number of film festivals in India and abroad. Examining the Meerut police’s disastrous ‘Operation Majnu’ in 2005 and the larger universe of moral policing of lovers that the media actively participates in, it’s a film that still resonates today.

The Public Service Broadcasting Trust has chosen “Morality TV” for its film of the week, which means it will be available online, on YouTube, for you to watch all week. (We’ve embedded it on this page right here for your pleasure.)

Vohra is a documentary filmmaker and writer whose work focuses on gender, desire, urban life and popular culture. So for your pleasure and edumacation, we asked her about the journey she underwent while making this film. Here are excerpts from the conversation. 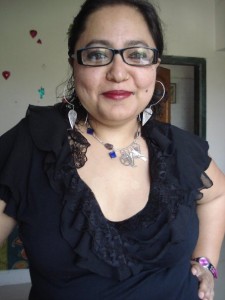 The first morality-related sting operation that caught my attention was the Shakti Kapoor sting. From that time I started taping all the sting-operation type news items that I felt revolved around morality. The trend of moral policing had started becoming something that concerned a whole lot of us at that time, because it was showing up in different ways, whether as dress codes in colleges or the banning of dance bars. Then in 2005, the Operation Majnu news story broke on TV – and as I later understood, became the first of a trend of such ‘sting operations’ where people were humiliated, paraded with blackened faces, etc. on television.

When Operation Majnu broke, I was shocked at the horror of its violence and I decided to make a film on it. When I started my research, the film I had in mind was completely different from what became of it after I was done. The film I wanted to make was on moral policing, made up of three interviews – the woman cop, one of the girls the policed had assaulted, who had filed a case against the police and the newsperson who broke the story.

When I landed in Meerut, the first thing that hit me was that these stories about romancing young couples were reported by crime reporters, which was in itself curious – the location of love under crime. As I began talking to them and watching my own taped news material closely, I realized the way these stories were reported, the language that was used, the framework of storytelling, all of it belonged to the same universe of Manohar Kahaaniyaan. Manohar Kahaaniyaan is a genre of stories that has always been popular up North, but exists in some form everywhere – rather morally grounded pulp fiction where ‘forbidden relationships’ would always have a bad end. The news sting operations were connected to the gaze in that language and that choice of story. This was the narrative that was thrust upon these young couples, such that every relationship was squeezed into an illicit frame and all love was depicted as sleazy.

It was during this period – in late 2006 – when I first discovered the term ‘loving jihad’, which has since then gone national and is now referred to as ‘love jihad’ by Hindu right-wing extremists. The idea was still in a nascent state, still an idea in formation. Operation Majnu was like an incubator for today’s ‘love jihad’ and dates back to an older legacy of moral anxiety in the face of social change, especially when it comes to intimate relationships – which always do exceed the boundaries prescribed by society.

These kinds of sting operations are the pulp fiction of our times. These stories were manufactured by the police and the media together to propagate a morality. During my research, a logically obvious question was one of the first to hit me: how did the reporters get there so quickly to capture everything from the beginning to end? The cops must have tipped them off or taken them along. The entire operation showed itself to me as a performance, a performance for people who were watching it on news television. Once again repeating the moral lessons of Manohar Kahaaniyaan – if you have a relationship across boundaries, it will come to a bad end.

The alchemy between the trifecta of Love Jihad-Police-Media created a narrative that didn’t actually exist. It created an imposing framework for a stranger’s eye on every man-woman relationship, deeming it immoral.

My film took a right turn and became more than just the story of a young couple, or the cop involved. It became about social morality and moral panic in the face of changing relationships in today’s times and the language and gaze which subtly impose this on a daily basis, well a 24×7 breaking news basis really! The film changed in nature and in form, which in turn pushed for a change in title as well. The working title for the film that I wanted to make was just “Morality TV” but eventually became “Morality TV aur Loving Jehad: Ek Manohar Kahani.”

Specific to Operation Majnu, Shyam Parmar – an NDTV stringer – held out a lot in terms of playing the story. As he says in the film “I kept telling my bosses that this is a manufactured story, not a real thing.” But eventually the competitive universe of TV news meant that he had to do this story because every other channel was doing it.

The police and the media working together on such social morality stories wasn’t anything new. This had been happening for a while, but things changed with respect to this particular story, causing it to go national, and so, set a template for such stories. Mamata Gautam, the woman cop who got carried away when the cameras were trained on her started to get violent in this moral narrative-based performance she was participating in. Moreover, she had had a bad history with one of the girls who, coincidentally, was in the park when the operation happened.

The sudden moral superiority as well as the power-rush that comes with being the hero in a narrative on camera perhaps pushed her over the edge. Unfortunately for her, right when her moral policing turned into a human rights violation, is when the press themselves snapped out of the narrative. Suddenly, they weren’t reporting the immoral couples but the focus was on police brutality. The accomplices, at the sight of violence, turned into adversaries.

In a piece of footage shot later, which Shyam Parmar showed me, in which Gautam was talking to the reporters, she asked them: “Aap toh humaare dost hain… phir kyun aisa kiya?” The question wasn’t asked in an emotional tone or a tone of betrayal. It was asked in jest, and the reporters even retorted in jest, reminding her that she shouldn’t have crossed the line. Gautam was sure that no real action was going to be taken against her. She was suspended for a short while and then transferred to Ghaziabad.

After spending most of the screen time on the media’s gaze, it is about halfway through the film that I begin to introduce my own, ending with a kind of romantic climax – a gaze of judgment turning into a gaze of love. Two boys – Shaukeen and his friend – buying giant Happy New Year cards for their girlfriends at an Archie’s card shop. I asked them if they really had girlfriends and Shaukeen said, “Haan hai, photo dikhaaoon?” His friend, meanwhile, was even more of a romantic, and said that he had a girlfriend, but he hadn’t ever seen her. His love story had started with him dialing a wrong number, which ended up in a missed call that was returned by the girl. The two got talking, and it was on New Year’s Eve that he was going to see her for the first time ever.

When asked how he knew if this was love, Shaukeen responded for his friend, “Pyaar toh pyaar hota hai madam, dekhe ho ya bina dekhe ho.” This is the same love that has been depicted as being sleazy by the mainstream media and stupid by the others, whereas it is just romance and silly youth, and should be looked on with affection.