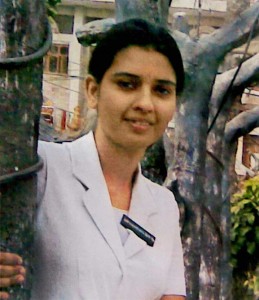 Even for the idiots who usually want an explanation of what-was-she-doing-there, Preeti Rathi’s tragic story must come as a shock. As Nishita Jha from Tehelka writes, what Preeti Rathi was doing was arriving in a new city for her first posting as a nurse in the navy. The Tehelka piece says evocatively, ” On 2 May, as she disembarked from the train, Preeti Rathi saw a Mumbai morning for the first time. It was a moment she had dreamt of for the past four years. A moment that her father, 58-year-old Amar Singh Rathi, had prepared for since the day she was born. As she disembarked from the train — father, aunt and uncle in tow — she wasn’t just a 23-year-old from Delhi moving to a new city. She was the first generation of Amar Singh’s family, born in a village in Panipat, walking towards a hard-earned future as a Lieutenant Nurse at the INHS Asvini Hospital in Colaba.” Ten minutes later, Preeti was attacked by someone still unidentified who flung acid in her face burning her throat and lungs. A month later, on June 2, Preeti died.

Dead cctv footage, lax investigation… it’s the same old story. The family is nowhere close to getting justice. Preeti’s poor father had to even intervene when the police (with a familiar randomness) arrested a young man, a relative of Rathi’s neighbours. Amar Singh Rathi had to file an affadavit clarifying that this arrest was wrong and that Preeti had not identified the young man as the perpertrator. It’s unclear whether Preeti’s family will ever even know what was behind the attack on their daughter.

Sometimes in the case of acid attacks, victims have fought to make a life for themselves such as the many members of Stop Acid Attacks, Bangalore-based Campaign and Struggle Against Acid Attacks on Women (CSAAAW) and Kolkata-based Acid Survivors Foundation India (ASFI). Nandini Krishnan’s piece in Sify has some details about the lack of statistics about acid attacks in India, the poor conviction rate and also the debate about the over-the-counter availability of lethal acid.

In 2012 Open magazine’s Chinki Sinha wrote movingly about a bar dancer’s slow movement towards reconciliation, peace and perhaps a new face, a decade after a colleague and her brother orchestrated an acid attack on her.  Preeti will never have a chance.