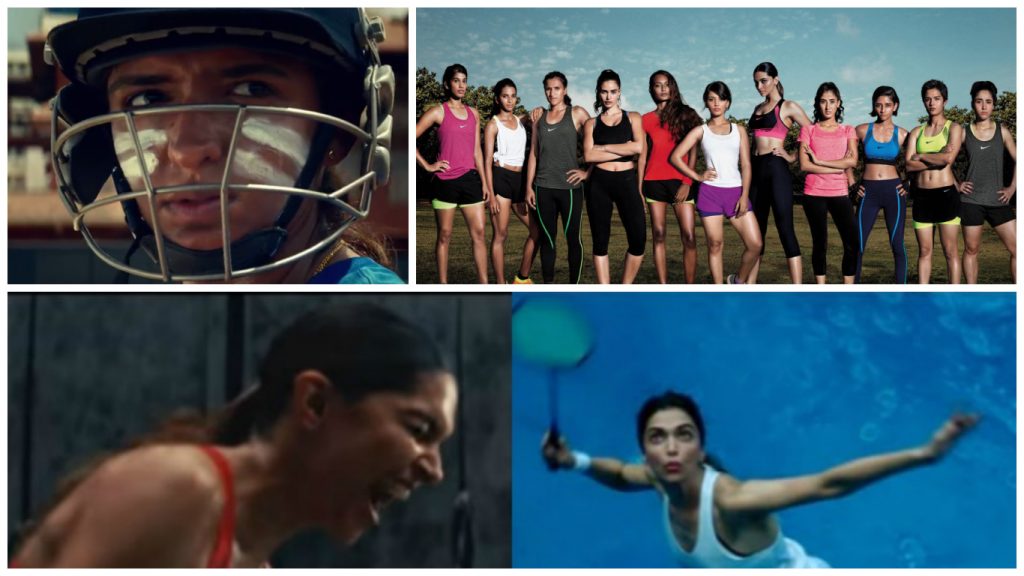 Have you seen Nike’s new viral ad with Deepika Padukone and a host of incredible, amazing sportswomen? If you can forget the weird hip hop dancers gyrating with a decorated truck in the background (seriously, sports is sexy enough!), it’s a gorgeous, glamorous video selling us Nike’s products, sure, but advertising them using sweaty, tanned, inspiring faces we know and love.

There are so many in there that it’s practically an exciting game of spot-the-sportswoman. There’s Rani Rampal, who may be the next captain heading the women’s hockey team to the Olympics; there’s Harmanpreet Kaur, cricket dynamo, the highest-scoring Indian in the Women’s World T20 this year and the first Indian to be playing in a foreign league; Jyoti Burrett, the short-haired stunt-performing football enthusiast who was part of one of the many women’s teams that won a SAFF Cup (she wrote for us about the cup and many other things here), squash champ Joshna Chinappa, surfer Ishita Malaviya, Tanvie Hans, India’s first woman footballer to play for an English club, and so many more — you’d be crazy to miss this.

We’re glad, because advertisers rarely back women’s sports: the World T20, held in India in March and April 2016, STAR Sports decided not to market the women’s game as they said advertisers weren’t interested in it, believing there was nothing in it for them. They didn’t even broadcast all of the women’s T20 World Cup matches even though they were happening in India, highlighted the fact that they were broadcasting more matches than ever, and wanted us to be happy about it. Thirteen matches were broadcast out of 23 — just about half of the matches that were played! A “top media buyer” was quoted back then as having said, “Rather than sell at a very low price, which would create problems for them next year as well, Star is giving women’s cricket almost pro bono.”

Fast forward to this morning, when ET reports that at the end of June, just two women’s kabaddi matches (put in as a “teaser” to test the waters at the current men’s Pro Kabaddi League) have smashed the previous record, according to STAR. Nithin Kukreja, STAR India’s CEO for sports, has said, “This is the watershed moment in the history of women’s sport viewership that we were waiting for. […] While kabaddi has been growing, WKC has got more viewership than any women’s sport has ever achieved in India. Even the entire UEFA Euro Cup so far has seen lesser viewership than the two matches of WKC.”

And what was their previous record, you might ask? ET‘s report helpfully tells us: 2.9 million impressions (the average viewers at a given time during the match), garnered on 31st March, when the West Indies women’s team upset favourites New Zealand during the semi-finals in Mumbai. That was nothing to sneeze at, advertisers and broadcasters!

We’d like to see Nike (and everyone) advertise more during women’s matches, and sponsor more women. Although we see Sania Mirza and Saina Nehwal in ads relatively often, as much as we love them, we can’t wait to see more amazing sportswomen on TV.

Are Indian Men as Useless as Advertisements Show? Or Is That What They Want Us to Believe?