HomeVaanthiDid You Not Give a Crap about Priyanka Chopra̵ ...
May 31, 2017

Were you living moderately blissfully, not giving a shit about Priyanka Chopra’s legs? Well that reverie is over. Because fans on Instagram went into raptures when Priyanka Chopra met Prime Minister Narendra Modi in Berlin yesterday. They went on and on about the two most powerful and legendary figures being in a single frame. Buzzfeed collected some of the funny things people said about the meeting on social media too. For others, though, it was the end of the world, because she was wearing a dress that showed some leg.

PC was trolled endlessly by people — both men and women — who thought that she was being scandalous, disgusting and crude by wearing a dress and crossing her legs in front of the prime minister. Modi has not fallen into a dead faint in the past when he met women in skirts, say, when he met then US First Lady Michelle Obama or UK Prime Minister Theresa May. So it seems like only the trolls think Chopra’s legs were insulting Modi. Or maybe sarkari legs are okay? Or firang sarkari legs?

Priyanka didn’t have much to say in response except put up a photo where she and her mother are wearing short dresses. 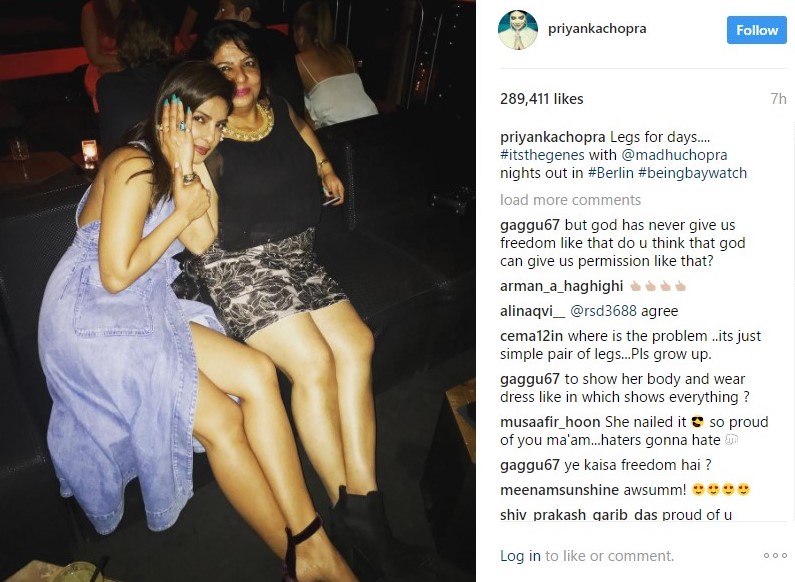 You know that old myth about Victorian prudes putting skirts on their dressing tables so that no one would have to look at ‘naked’ table legs? Sounds laughable now, but with an Indian celebrity’s legs breaking the Internet today (and people panicking when Fox news presenters wear pants), it sounds like we might as well do everyone a favour and revert to those times. Or better still, wear table cloths around our legs.