In the aftermath of Hollywood’s Hurricane Harvey, the Washington Post put out a piece titled ‘The 6 worst things men have said about sexual harassment in just one month’. It basically serves as a guideline of things you shouldn’t say when accused of sexual harassment (“I’m gay”, “those people are all liars”, “I went to rehab”).

In India, we’re facing our own inability to adequately respond to allegations of harassment, complicated by the realities and nature of social media. Raya Sarkar’s now-infamous List of Sexual Harassment Accused (the List) — an online list of Indian men in academia accused by women of repeated sexual harassment — has opened up a real feminist moment. Indian activists, lawyers, academicians and women from all over the world have been taking public stances on where they stand with respect to the List, and the ongoing debates around it have invoked the caste, class, lived experience, citizenship, social standing, visa status and legitimacy of all the women involved. What’s been absent from the debate is a real engagement from men, especially those involved or named in the List.

I was talking about it with a male friend who said there’s really nothing a man accused of sexual harassment (with no context or details) can say. He thinks the men on the List are damned if they say anything, and damned if they don’t. What, then, would be an ideal response from them?

Kolkata’s Jadavpur University professor Abhijit Gupta was one of the first men named on the list to respond. He put out a carefully-worded social media message which read, “I am unable to own or rebut any charge since none has been made so far.” Amazingly, he also seemed to want to turn his classroom into some kind of Truth and Reconciliation Committee, and invited students to “speak directly to [him] about any question they might have about the present situation”, and that he “had already started the process of addressing questions by asking students in a class he had taught and intended to carry on this process unless the current narrative changed dramatically.” He basically used the kind of language and rhetoric that seems to show great ideals, but just allows the speaker to hide behind grandiose promises. Please show me a classroom in this country where students can have a free and open discussion with their professor about his being on a list of those accused of sexually harassing students. Even if you, for some reason, assumed Gupta is totally innocent, he should join the long list of men in academia who seem to be luridly wallowing in their ‘accidental’ privilege. ‘What, me powerful?’ is their permanent slogan.

Gupta’s post was harpooned spectacularly by journalist Abhimanyu Kumar, who called Gupta out, reminding him that while specific charges hadn’t been framed, the list is still a compilation of men accused of repeated sexual harassment (that meets the definition of harassment under the Vishaka guidelines). Kumar also said that a lot of people would fall for the sophistry of his language and the kind of arguments he tries to hide behind. It’s true: His early original post, saw comments from students and ex-students praising and expressing their love and support for him, his measured response and the “steps” he was taking to address the issue.

Others on social media blasted Gupta’s “measured” response, laughing at the idea of discussing his case harassment with him on a bright sunny morning in class, and also posing other (im)pertinent questions to him, like why there are 10 professors from Jadavpur University on the List, and enquiries about the existence, composition and working of the University’s internal complaints committee, and the number of complaints (out of the total received by the committee) that were actually looked into. Gupta immediately deleted the post, but these questions show us some responses we really do want to hear from the men involved: About the way the institutions they’re familiar with work, how they foster the environments that allow for abuse to happen.

Other men on the List, like Germany-based historian and Presidency College alumni Benjamin Zachariah, have also pointed to the lack of details in the List itself to try and make it seem less legitimate, and to say that that’s the reason why they can’t refute any of the charges. The audacity of this move was only matched by the speed with which it was smacked down: Several women wrote out almost immediately about their experiences of being groped by Zachariah at parties, and even while asleep.

The Indian Express reports on one DU professor, unnamed in their report but who apparently features on the List, who decided to go the Arunabh Kumar and RK Pachauri way, calling the list “malice” on social media, and threatening that “after taking up this issue with the ICC, university officials and other experts, [he] will definitely sue this lady [Sarkar] and file a defamation case against her.” 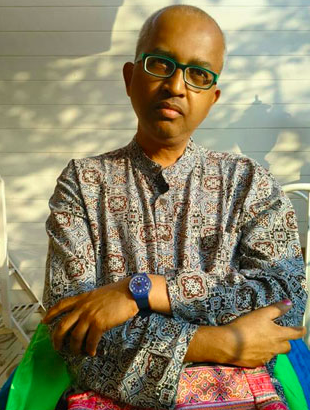 And then of course, there was Ashley Tellis, an English professor who claims he was fired from his post as a lecturer at St Joseph’s College, Bangalore for ‘being gay’, and who made two statements upon being named in the List. The first appeared in The Print on October 25: He mentioned another time when he was falsely accused of sexual harassment (in Delhi University in 2003), and said he was “charmed” to find himself on this List. There was nothing else of note in it; it didn’t seem to have any intention but to provoke. He made another, longer statement on DailyO the next day, in which he spoke about the necessity of following the law, and said it was proof that feminists didn’t really care about sexual harassment because they had not yet created a network on social media to deal with it or engaged with it more actively on campuses before.

In fact, the List has become an excellent and unique opportunity for Indian feminists to ask some tough questions of themselves, and of each other. Like on October 26, Kalphana SD, a student at JNU published a statement from ‘a feminist collective’ on campus. The statement interrogated conceptual frameworks (“Who are all the part of this feminist community?”, “Who guards the walls of this community?” and most excitingly, “How is the legitimacy of the ‘task’ of the feminists derived from their capital which they have acquired by using their privileges while claiming moral high ground which de-legitimises the other ‘tasks’ by other, younger, feminists?”) and also asked sector-specific questions such as “How did professors become the gatekeepers of academics that it makes ‘networking’ as necessary as it is in a movie industry to get a job?”

Meanwhile, men…It’s the first time in a long time that men have been so comfortable with accusing women of being rape apologists.

A month ago, I probably would’ve automatically agreed that there’s really just no good response from a man facing a general accusation of sexual harassment without any details. But it isn’t a month ago, it happened now, and we literally just saw with our own eyes that men who want to make things better can actually have meaningful responses to the harassment we face at their hands. In the immediate aftermath of the Harvey Weinstein allegations and the #MeToo campaign, we saw some men really take the moment as an opportunity to think back about their own behaviours and prejudices, and we even saw some who weren’t accused of anything actually take it upon themselves to speak publicly about harassment they had knowingly or unknowingly committed in the past, about how sorry they are and how they’ll fix themselves in the future.

So what is a good response if you’re accused of sexual harassment with no details? Well, if you’re sure you never did it, you’ve the right to say that, and we’ll see what women say in response. If you’re not sure if you ever did harass someone or feel like you don’t remember, go the Zachariah way and ask, because people will be happy to fill you in.