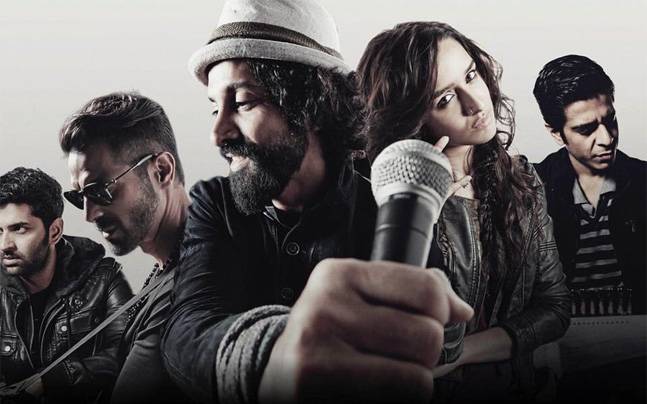 When Rock On 2 released on Friday, I realised that Bollywood movies about music generally centre around boys. They aren’t even about the music — Rock On 2 doesn’t have enough of it — but are about intense, bad boys looking cool on the guitar and drums. I also realised that when you add a woman to the story, the movie doesn’t become any less about these bearded boys who know they look cool (a self-consciousness that ironically makes them not-so-cool).

Rock On 2 is a hotchpotch of so many things that at the end of it you don’t really know what it’s about. Is it about Magyk, whom everyone remembers from Rock On!! (2008), coming together to perform again? Is it about Adi (Farhan Akhtar) wallowing in guilt because a boy who has been chasing him to listen to his music demo commits suicide? Or is it also about the completely crazy music industry?

Perhaps a part of it is about Jiah (Shraddha Kapoor) disobeying her famous sarod-playing father, who says good music never has piano and guitar, to become a singer. This is, of course, a minuscule part, because at some point the movie takes a sudden departure from the essences and becomes about saving a village in Meghalaya.

This genre of Bollywood films have a type. They are about men invariably being bad boys. We have seen the alcoholics (Aditya Roy Kapoor in Aashiqui 2), the druggies (Shahid Kapoor in Udta Punjab), and the dudes with serious anger management issues (Ranbir Kapoor in Rockstar). They are those who have been told, like Ranbir Kapoor in Rockstar and Ae Dil Hai Mushkil, that you need a broken heart to make good music. In Rockstar, Janardhan Jhakar aka JJ aka Jordan whose idol was Jim Morrison, actively sought out Heer (Nargis Fakhri), the “perfect heartbreaking machine”. Perhaps the heartbreak strategy is used to pepper a music movie with some romance, after all how can you have a film without it? Some movies are just about finding out that musicians like Tommy from Udta Punjab, or Rahul from Aashiqui 2 are just nice guys who got lost somewhere along the way; deep down inside, there is still goodness in them.

Rock On!! and Rock On 2 seem to have slightly different kind of men. These are the intense type, but also the good ones. So what happens when you introduce a woman musician in the story? We have few women musicians in these movies in the first place. In films like Aashiqui 2 the female lead Aarohi (Shraddha Kapoor), herself a singer, is willingly and happily, and without the slightest internal conflict, ready to chuck her career for an alcoholic, former-singer boyfriend who can’t deal with her success. This is the eventual end for most female characters in these films.

Jiah’s character in Rock On 2 doesn’t give us anything new either. She is in a complicated story herself: her brother is the man who commits suicide after months of listening to his father tell him he’s a bad musician. The same musician whose music demo Adi didn’t listen to. Of course, Adi and Jiah cross paths, and while the suicide wasn’t Adi’s fault, there’s no time spent in considering the complicated feelings that such a situation might throw up.

Instead, the bright-eyed Jiah quickly and easily tells Adi that he must not feel guilty. And, irritatingly, it is he, now all teary-eyed, gets the sympathy because he has been carrying the burden of guilt for five years. As for Jiah, she remains one-dimensional, which is why we are supposed to love her.

Even if we let this pass and decide to look at her music — after all, in the beginning of the movie we are told that she is the one who helped Adi come to music again — nothing changes much. We see Jiah tearfully ask Adi, “Main kya karoon?” (What should I do?) after she fights with her father who doesn’t want her to perform (This is the only time in the film where she is allowed to show some strong emotions). Adi, her guiding light, tells her to just make music. If it hasn’t been abundantly clear so far, this movie is still about the men. If Ranbir Kapoor’s character then was told the bit about ‘heartbreak’ to hone him into perfection, in Rock On 2, the beards are the saviours: of women and hungry villagers of Meghalaya.

It doesn’t bode well that filmmakers are still clueless about portraying realistic women characters. There is no ‘unraveling a complex character’ – man or woman. Instead, they elicit yawns, like boring elevator music.

One Response to “Beards, Bad Boys and Saviour Men. Rock On 2 Is Like Every Other Bollywood Music Movie”