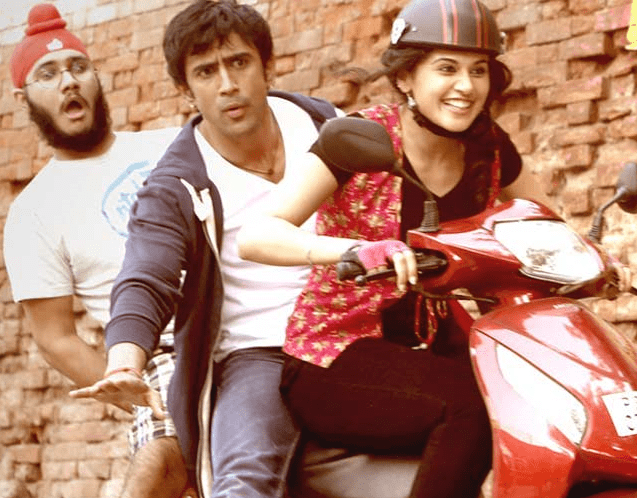 Running Shaadi begins with a teenage Nimmi (Taapsee Pannu) in school uniform and plaited hair in red ribbons, telling Bharose (Amit Sadh) that she needs to have an abortion. Bharose works at Nimmi’s father’s bridal clothes shop (and looks the same age throughout the movie even though the story skips many years). It’s a surprising moment, not just because it’s in a mainstream Bollywood film, but also because Nimmi is not apologetic or guilty.

She looks scared, as one might expect her to be, but the moment passes into the beginning of a kind of quiet half-love, with Bharose taking care of her and suitably lovey music in the background, as he cuts her an apple and makes her chai.

The idea behind Amit Roy’s Running Shaadi, a new “social service” website that helps couples run away and get married, sounds like a suitably complicated and fun place for a movie to begin. Nimmi, Bharose and his friend Cyberjeet (Arsh Bajwa) decide to start this website. Of course, one might also expect it to deal with at least some of the many different ways that families respond to couples who run away (other than with happy reconciliation), but Running Shaadi hardly ventures into this less safe ground.

Instead, it keeps trying to be funny, showing a very clear divide between parents who hate the website and youngsters who love it. Even when this isn’t explicitly said, we see women looking sneakily and longingly at the website’s posters the first time they walk around Amritsar, where the movie is set. As the story progresses, lovers begin to state the most common reasons they want to run away — inter-caste marriage, inter-religion marriage, financial difficulties, family rivalry, and arranged marriage. 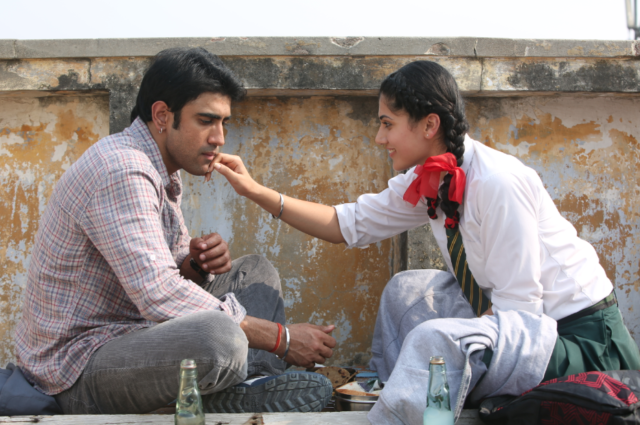 Running Shaadi’s trailer shows everyone, from a Muslim man wanting to run away with a Hindu woman, to a gay couple, to an old man, all asking for help to run away. Strangely and conspicuously though, the trailer never shows any women asking for help.

As much as the movie itself seems to go nowhere, I’m reminded every time Nimmi talks that the movie wouldn’t have managed to trundle as far as it does without its women. At the end of it, you continue to be surprised by that first abortion moment, just like you realise that the movie gives its women more space than the trailer suggests. Even though the trailer begins with Nimmi wearing the same wonderfully dismissive expression that she keeps for the most part of the movie — as though constantly cursing that nobody else is able to keep up with her — she never becomes like Geet from Jab We Met.

Where Geet, with her loud, I’ll-do-whatever-I-want attitude is only there for Aditya to have realisations about his life and then come and save her, Nimmi never really seems to stop being the colourful, crazy, demanding woman that she is. She’s described as Amritsar’s pataka queen – a woman riding a bike while the two men sit awkwardly behind her.

The truth is that Running Shaadi’s men are mostly forgettable. Bharose is a nice guy. He’s from Bihar and works at the bridal clothes shop and there’s nothing to really dislike him for, except for moments when he’s so nice and predictable that he becomes easy to pay very little attention to. Cyberjeet is funny — the first time we see him, he’s doing an aarti to a photo of Mark Zuckerberg, and his red pagdi has a tiny Facebook like sign on it just above his forehead. Nimmi, on the other hand — except for in classist moments where she is calling Bharose gawar again and again — is not boring. 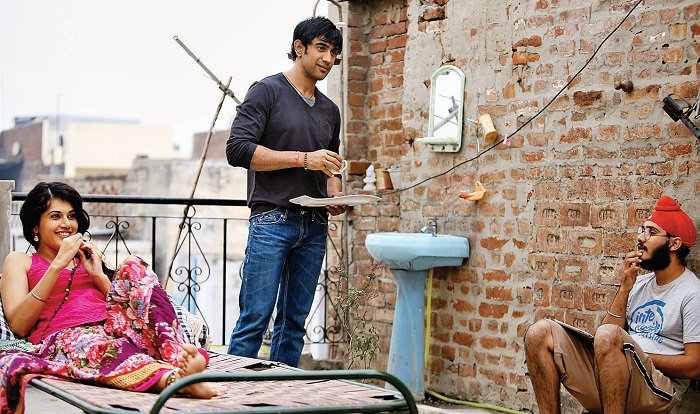 Here an amazing thing happens. I can’t remember the last time a Hindi movie devoted a scene to an abortion. (Did we see Meghana Mathur, played by Priyanka Chopra in Fashion, go through with the abortion?)

Before the abortion, we hear the doctor turn to Bharose (who has accompanied her) assuming he is the man Nimmi had sex with, and says, “What problem do you guys have with using a condom?” The rest of the abortion passes in song-mode, with Bharose looking into a room where Nimmi is sleeping and then helping her home.

Soon after the half-love moments of this song, the movie fast-forwards to Nimmi in college (she’s studying English honours). She gets a temporary butterfly tattoo on her shoulder, gets angry when Bharose keeps trying to call her while she is at a party, and is embarrassed by him – her boyfriend who hasn’t gone to school or college and doesn’t wear fancy clothes.

But Nimmi makes nice with Bharose again and asks him to help her run away from home, because her parents arrange her marriage when they hear about the abortion. She tells him there is an educated boy she loves. Bharose, heartbroken but sweet (and also engaged to a girl in Bihar), helps her run away only to find that she’s left a letter at home declaring her love for him. It’s a bit of a weird moment because even though we know Bharose loves her (and would never act on it), we’re not sure how to respond to Nimmi deciding for them both that they should run away without telling him what she’s doing.

When the movie shifts to Bihar — which means more stupid, classist jokes — it’s Bharose’s turn to escape his arranged marriage. Bharose’s fiancée is the only other woman in the movie (apart from Nimmi) who we see making an effort to go after the love she wants, hiding from family who follows her around everywhere, wearing a burkha to a theatre and buying two tickets, one of which she leaves under a Thumbs Up bottle for the man she loves (an Amitabh Bachchan movie is playing). 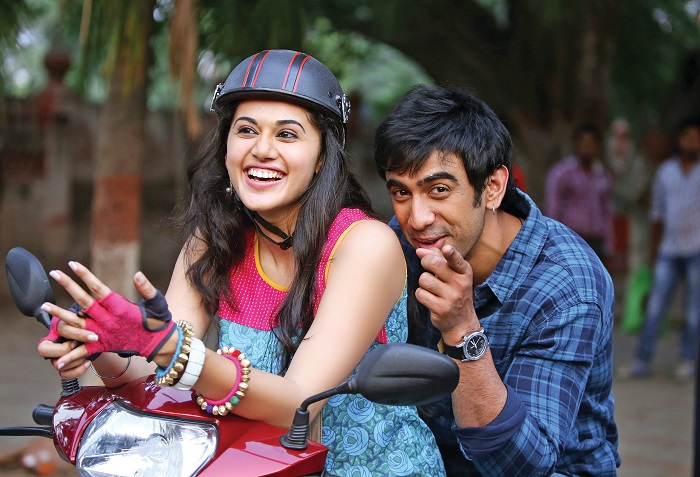 If there’s anything to watch Running Shaadi for, it’s the realisation that nobody will ever be able to keep up with Nimmi. She wants everything. Even in the moment when she is telling Bharose what she has done, she isn’t apologetic in the least — the only time we hear her say sorry is when she tells him it was wrong of her to be embarrassed by him in college.

The apology never comes twice. Unlike Shyra in Befikre, who predictably begins to look back on the days when she slept with many men in Paris with guilt, Nimmi never shows any signs of guilt — about being with men, running away from home, or being rude to Bharose when she goes to college. She knows what she wants and goes at it with such determination that you’re not in the least worried that she won’t get it, in the way that we are always feeling fed up on behalf of Bollywood female leads. (Isn’t it depressing that the only thing the female lead is guaranteed to get is the guy, and it’s not clear that she — including Nimmi — wants him or needs him?)

Running Shaadi isn’t great. But considering how much care seems to have gone into writing Nimmi’s character, the movie might have been much better if it let its women chase after and demand love, rather than showing just men asking how to run away. The movie ends with Bharose and Nimmi going back to her house to reconcile with her parents.

Her father is cleaning his gun, and the moment they enter, there is a crashing of glass because Nimmi’s mother drops the tray she’s holding when she sees them. This time, too, Bharose and Nimmi run. But while Bharose looks scared, Nimmi looks extremely happy to be running again and you are left feeling like nobody has caught up with her yet, and will never be able to.