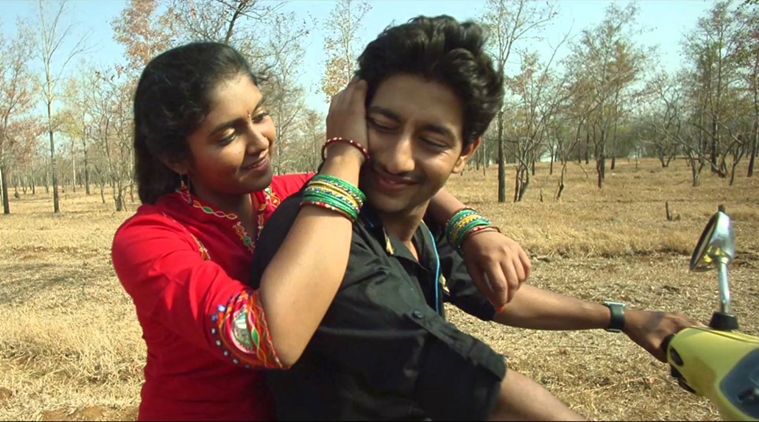 The Hindi adaptation of Sairat is here, and we’re reminded of how much we loved the original. You watch the two and decide which you like best, and then take a look back at our review of Sairat from 25 May 2016.

When we are 16 and in love, we believe in films before we believe in ourselves. We get the strength to survive the long days before we see our soulmates by listening to songs on repeat. We forget what hunger is and yet we put on weight like never before. It’s the damn feelings. Like burgers, they go sit in our stomachs. There are many books and far too many movies that show us how to behave in love.

When I was watching Sairat, it seemed like any other love story, but only better because the movie takes time to show us this love story. And it’s important that when we hear/watch love stories, we are given the details. Do the boy and his friends sit in a ‘Browsing Centre’ to see if the girl is on Facebook? Does the girl ride her two-wheeler over a bedsheet full of pappads while singing her ‘I am in love’ song?

When the hero waits for her call, is he anxious? Is he staring at the phone like his life depends on it? When they start talking on the phone, do they say that they will eat only after the other eats?

In my teens, I hated watching love stories with my parents. My mother would sit next to me and parody everything the hero said. For instance, she told Vivek Oberoi in Saathiya to jump from somewhere and die when he tells Rani Mukherjee – do ghante kya, in do minute ke liye main do janmo tak intezaar kar sakta hoon (what are two hours? To see you for just 2 minutes, I can wait two lifetimes). My father would do the more sensible thing and change the channel.

Once in a game of truth and dare (I picked truth), I got bullied by all my cousins for saying in front of my family that I’d pick a poor man who loves me instead of a rich man who didn’t. My aunties decided to use this as a teaching moment in the ways of love marriage v/s arranged. With pursed lips, they quoted (then and later) the 80s Kumar Gaurav – Vijeta Pandit super-hit Love Story. (Although I think the lip pursing had something to do with Kumar Gaurav) They told me that life is not Love Story, where you run away from home and sing dekho maine dekha hai yeh ik sapna phoolon ke sheher mein ho ghar apna.

Archie (Rinku Rajguru) and Parshya (Akash Thosar), the protagonists in Sairat dream of the Love Story kind of love. But Parshya is a ‘lower’ caste boy and Archie is an ‘upper’ caste girl. And even their unconsciousness sets limitations. In his dream, she puts on Alia Bhat’s shiny party dress, (the same one that Alia Bhat is wearing in a poster above his mattress) jumps from her balcony and comes to his house in the middle of the night to demand a kiss. And even in this dream, he isn’t far away – they are both still in Bittergaon, with his family sleeping next to him. When the film breaks into songs, they don’t suddenly move to plush, green landscapes — they are still in college, in the fields, or in the temple.

At the outset, Sairat is the story of these two. But I couldn’t help noticing how much film is about Archie. Archie claims to love watching movies but is very different from the heroines we have watched. In a blue anarkali, wearing Salman Khan’s Dabangg glasses, she rides her brother’s Bullet. She also drives her father’s tractor and rides a horse. In the beginning, when Archie and Parshya first meet, she is single-handedly getting a bunch of boys to leave a well they were all swimming in, so she and her friends can jump in and swim instead. Hand on waist, right leg raised, too coolly she asks if the boys wanted to be told especially in English to leave the well.

Songs are lessons to show us how men and women behave differently when in love. For women, it’s the shy is coming ‘I know you are watching me but now I must brush my hair away from my eyes’ look. For men, it’s the ‘raat ko neend aati nahi so let me just lie down and look at the ceiling, while I put my hands behind my head and show the world my armpit hair’ look.

In Sairat the songs are particularly wide-grin material and this is partly because of Archie. So what does Archie do when she is in love (after they have both declared love)? She doesn’t put her head down when her and Parshya walk towards each other and come face-to-face in full slow motion. She looks him in the eye till he passes by. In class, she pushes her friend’s head down so she can get a better view of Parshya and stares at him throughout. She doesn’t stop even when he asks her to so he fakes a stomach ache and runs out of class.

Later in the movie, it is she who points a gun at the goons beating up Parshya and threatens to kill them if they ever touch him. And yes, she shoots. She takes Chaalbaaz’s Manju (Sridevi) and Tanu weds Manu Returns’ Kusum (Kangana Ranaut) and makes it better.

A little later into the film, when they have run away – they live in a small room in a Hyderabad slum. Most reviews have compared the film to Alai Payuthey/Saathiya.

But in Sairat, the couple don’t have friends to set up their house with jute curtains and yellow bedspreads. What you get in Sairat is really the cautionary tales that our aunts warned us about. And perhaps, to keep these thoughts at bay, Archie buys a poster of a cottage – one of those wooden cottages in foreign places with green grass in the front – when Parshya gives her money to buy groceries. If I had watched this with my family, this would have been the point where they’d poke me 5 times. But I was watching this with S.A, an idealist who swooned at all the right parts in the first half and threatened to stop talking to me if anything happened to Archie and Parshya in the end.

It’s impossible to not notice that in the second half of the film, there is something ominous about the way the camera follows Archie and lingers on her face and her feet when she steps down to use the toilet, and when she takes the bottle of mineral water from Parshya after saying no to the mug of regular water. It’s almost as if the film is challenging you to assume that she is going to leave him and run back to her family.

What you see in Archie is her struggle. She complains about a stench in the room they live in but she grows. She learns Telugu, makes friends with colleagues, and goes to watch movies by herself when Parshya is angry with her.

The movie showed us an Archie in the first half where she came from a house that had her real name ‘Archana’ inscribed in the front of their house in big, bold letters. This is where she fell in love and sang songs in the fields, her dupatta flying behind her, a butterfly next to her. And then we see an Archie looking doubtfully at the loo in the slums, houseflies buzzing around what we assume is shit. In a moment of disbelief, she throws a bucket of water aimlessly, just to get rid of the smell.

In Fandry (Manjule’s 2013 film), Jabya (Somnath Awghade), the protagonist does little disappearing acts throughout the film. Like Parshya, he is a Dalit boy in love with an upper caste girl — Shalu. His family does small jobs to survive in the caste-ridden village of Akolner. They catch pigs, make and sell bamboo baskets for a living, and do construction work. Every time Jabya is seen doing either of these things and incidentally, if Shalu or any of his classmates are around, he hides. In one scene, he hides under a bamboo basket. In another, he hides behind a wall and waits for them to leave before his father pulls him out, beats him and makes him chase pigs.

He struggles and in these moments, both Jabya and Archie stand at opposite ends. While the connection between Jabya and Parshya is clear, since they are both in love with an upper caste woman — Parshya knows the rulebook to running away, in a way Archie does not and in a way that Jabya will never find out. Parshya is aware of the impossibility of a ‘living in a cottage’ situation and he does not chide Archie for having those dreams. He is surprised when she says she doesn’t know how to make chai and although it’s not a deriding surprise; later in the movie, he slaps her in a restaurant because he thinks she is sleeping with her boss.

In these moments too, Archie struggles between the decision to go back to her family and the desire to stay back with Parshya. Life is not what she thought what it would be. Still, she picks desire and goes back to him.

Throughout Fandry, Jabya chases a black sparrow whose ashes, he believes, have the power to make Shalu fall in love with him. He fails in all his attempts to get the bird in a way that Archie fails in her attempt to get the ‘living in a cottage’ love story. Both their struggles are marked deeply by love.

In a festival scene, Jabya sits on his friend’s shoulders and dances, hoping that Shalu who is standing above, will take notice of him. Minutes later, he is pulled down and made to stand still to support lamps on his head so the upper caste people dancing around him have enough light.

There is nothing subtle about the way Manjule depicts either caste and violence or love and violence in both these films. Both in Jabya’s case and in Archie’s, caste and love become inevitable forces that drive their actions. But what happens when they make their choices? As a review puts it, Manjule takes your money and sends you home with a slap on the face.

I think it’s for this slap that in a hall in Rahimatpur, Satara district – two shows have been added. One at midnight and one at 3:00 am.

7 Responses to “Reading Sairat’s Rulebook of Running Away”