There’s a DJ in Banda who lives across a pink house and plays ‘Sampat Pal’ only songs, sometimes interspersed with celebratory music and songs about the Congress party. Deep in the basement of the pink house, Sampat’s home, for the first time in a decade of prowling the Bundelkhandi outback, Khabar Lahariya bears witness to Sampat Pal’s fame and glory, as showcased in the several awards on display. “Don’t you ever get threatened by people? Powerful people who’d like to see you disappear from here?”, we ask her. “Oh, all the time,” she says, flicking her wrists in dismissal, as if waving it away, a mere inconvenience, her bangles tinkling, and continues, “I get threats all the time. And I might be murdered someday, it’s very possible. But so what? You only die once. You only live once.” And our gender-norm-bending hearts leap in agreement. 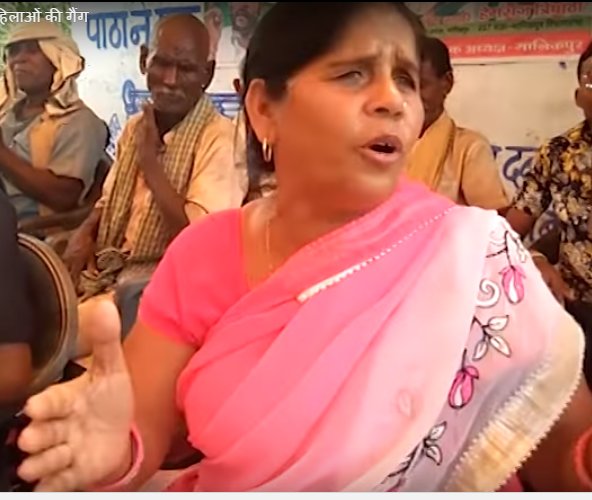 It’s the stuff of legend, this grit and steely resolve. A ‘personality’ like none other –perhaps the revelation in pink the world was waiting for? Or the only kind to flourish in Bundelkhand’s unforgiving patha landscape? It’s a question we have mulled for many years, and now, against the backdrop of the sound and fury of the country’s biggest election, we look at the phenomenon of Sampat Pal a little closer.

It took time and patience and a whole lot of rage for Sampat to emerge as a crusader of justice – because in a lawless land, all you can do is take the law into your own hands.

Sampat first began to voice her disgruntlement as a young bride; married off early and subsumed within a world driven by patriarchy. A dramatic public apology is what set her off on the path she was destined to follow. After days and nights of counselling a frightened and scarred neighbour who was being beaten by her husband, she came to the decision that the responsible party should be made to apologise to his wife in public: a shocking act, for a culture that shrouds domestic violence in silence and impunity.

Pink saris, martial arts, self-defence tactics, and a dare-you attitude set her and her bevy of women apart and the Gulabi Gang was born. Bollywood sat up and took notice (with Madhuri Dixit playing Sampat, no less!), international media thronged the streets of Banda, she got invited to Bigg Boss, everyone and their aunties made (or wanted to make) documentaries on her. In a context where violence was a reality one didn’t blink at, no one seemed to see the Gang’s tactics as furthering the cycle, or Sampat drawing on the same rhetoric and refrain as the structures she was opposing. The irony of a violent, casteist or then apathetic police force being bludgeoned by a force of angry women was mostly camouflaged. On the contrary, it wasn’t long before they came calling – the men in white.

Today, Sampat Pal and her gang are a force to reckon with – “we are not a gang in the usual sense of the word, we are a gang for justice” says their PR machine; police officers and red-faced husbands tremble at the flash of pink on the horizon. They are also entrepreneurs. In 2003, Sampat’s fame and enterprising streak helped Prema Rambahori, a Dalit woman, set up a small business in Badausa village, a tribal area some distance from Attara, where the Gulabi Gang is based. They also work in the shaadi market – providing facilities for all the requirements of a wedding, including catering, trousseau planning and shopping, mehendi and floral arrangements.

Woh to chale gaye desh ko azad kar ke.
Ab rote hai woh desh ko azad kar ke…
Sampat’s entry into politics was relatively smooth. The Congress was first to woo her and her affiliations have been with the party ever since. UP ko model (state) banana hai? Toh bhaiyya laao sarkar Congress ki. Ab ki baar sarkar bhaiyya Congress ki… is her vociferous chant the days we accompany her on her informal campaign trails across Manikpur. She tried her luck as an independent candidate in 2007. In 2012 Sampat was given the Congress ticket but she lost to the Samajwadi Party. This election, she tells us, the Congress has promised her a ticket again. Notably, Rahul Gandhi featured prominently in the Gulabi Gang’s catchy campaign songs during his Bundelkhand khat sabha in September this year.

Sampat’s strong talents in negotiation and making herself heard, coupled with her fierce and feisty persona come together in her campaigning style: jan sampark, rasik songs and poetry and loads of improv! Colourful language and one-on-one time with her supporters, an almost personal, I’ve-lived-it-myself style of relating is perhaps unique to her, as a woman candidate who is acutely aware of her context and location. She has her strategy in place too – often harking back to the nation-building era of the Congress in her allusions to Nehru, a bang-on emotional hook if there ever was one. In Manikpur, she asserts strong appeals that target the Kols here, a predominant tribal community but with Scheduled Caste status. Her ability to bring Kols and Dalits together is another cause for political attention, in a state where Dalit politics are struggling through transition.

The buland awaaz and the pink sari go a long way in ensuring Sampat a seat in the big bad world of UP politics and governance – a world she’s familiar with, a world she’s carved her place in, with might and right.

Kya ab Dilli door nahi?, is a question we’re all asking, along with her.

We pause outside the pink house and read the name board. ‘Sampat Pal, Chief Commander, Gulabi Gang.’ Now there’s a message.

This piece first appeared on Khabar Lahariya. You can read it here.

CJI Sexual Harassment Case: Why Gogoi’s Accuser Rejected SC Panel and What It Stands For