Now that The Hindus: An Alternative History has been pulped, here are some recommendations to satisfy your curiosity about ancient India:

The legal notice sent on behalf of Dinanath Batra to Wendy Doniger, the author of The Hindus: An Alternative History and Penguin Books, its publisher, describes her as “a woman hungry of sex.” It asks that Doniger “ tender an unconditional apology” to Dinanath Batra “and also to Hindus worldwide; withdraw the said objectionable portions from the said book and to undertake not to offend religious sentiments of Hindus in future.” But I digress, as this piece is not about what these quotes reveals about deep-seated misogyny, censorship or frightening fundamentalism, about which much has been written already. For those amongst us whose curiosity about ancient India has been piqued in light of recent events, here are three books about the ancient Indian past we can read, before they too offend someone and are taken off our shelves: 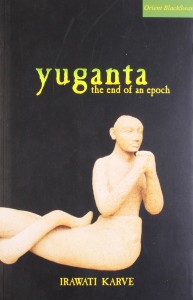 Yuganta is a series of essays written by the anthropologist Karve that deals with the inner worlds and motivations of Mahabharata characters. Through her discussion of characters like Draupadi, Karna, Kunti and Krishna, Karve highlights the complexity and realism of the Mahabharata’s characters as contrasted to the idealism of the Ramayana. In her essay on Draupadi for example, Karve compares the “heroines of the two great Indian poems,” Draupadi and Sita, to highlight not just their differences but also those between the two epics. In her essay on Gandhari, Karve creatively explores the inner turmoil of a woman resigned to a life of voluntary blindness through an imagined conversation between her and her husband, Dhritarashtra. While one may disagree with several of Karve’s interpretations, Yuganta is an engrossing and provocative reading of the Mahabharata in all of its inexhaustible complexity. Karve’s modest aim alone makes it worth reading, as she writes: “I shall consider it a victory if they think that my interpretation is wrong and read the Mahabharata merely to prove it wrong.” 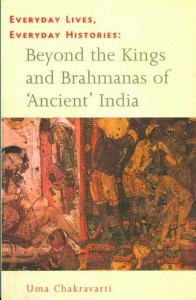 This book is comprised of a series of essays written by Chakravarti over the course of decades of academic engagement and political activism. As she writes in her introduction, “History as Practice,” this book is “as much about the present as it is about the past.” Through a reading of various sources, including ancient texts like the Pali Jatakas, Chakravarti centres her narrative around those who have always been on the margins of history. She highlights issues of marginality, exclusion and violence along the lines of class, gender and caste in ancient India and discusses how the ancient past has been used for ideological purposes through television serials like the Ramayana and Mahabharata. This collection is essential reading for anyone interested in the lives and histories of people who have always been hidden away in the margins.

3. The Absent Traveller: Prakrit Love Poetry from the Gathasaptasati of Satavahana Hala
Selected and translated from the Prakrit by Arvind Krishna Mehrotra (New Delhi: Ravi Dayal Publisher and Penguin Books, 2008[1991]). 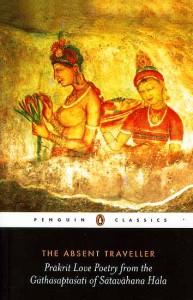 The poems in this collection are translations of Prakrit gathas or songs, dated to the second century. Mehrotra’s vivid translations of these ancient verses make them seem like they speak to both the past and the present. Written mostly from the point of view of women, these poems are witty and visceral, evoking both longing and laughter. They tell of separated lovers, quarrels with mother-in-laws and secret meetings with illicit lovers. Some of the more compelling gathas speak of disenchantment with marriage or the possibilities of love outside of its frame. For instance:

“Catching sight of her lover
Amidst her in-laws,
The bride, renouncing all,
Is sick for the paths of the forest.”

“Let faithful wives
Say what they like,
I don’t sleep with my husband
Even when I do.”

This selection from the Gathasaptasati is perhaps one of the finer treatments of the sexuality and interiority of women in ancient India.

Akbar Isn’t the Only Mughal Getting the Boot from Maharashtra Textbooks. So Are a Number of Mughal Ladies