“If you steal 1,000 rupees, the hawaldar will beat the shit out of you and lock you up in a dungeon with no bulb or ventilation. If you steal 55,000 crore rupees then you get to stay in a 40-foot cell which has four split units, internet, fax, mobile phones and a staff of ten to clean your shoes and cook your food (in case it is not being delivered from Hyatt that particular day).”

These are lines from the the introduction of Behind Bars, a book by journalist and NDTV anchor Sunetra Choudhury. If her previous book, Braking News, detailed her travels with colleague Naghma Sahar, trying to get an insight into the mind of the elusive Indian voter, this new book is pieced together from post-jail interviews, news reports, legal documents, emails and letters to show us what prisoners’ lives can look like.

But this book isn’t just about lives behind bars, but also about the effect that money and power can have on our legal system, even if you are behind bars. 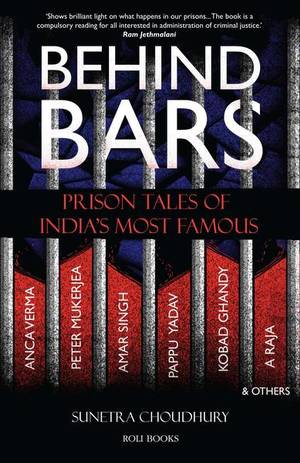 Most of the cases she writes about are well-known like the Sheena Bora murder; AAP politician Somnath Bharti, who was accused of abusing his wife; Pappu Yadav the infamous MP and his multiple incarcerations… but she’s also got a couple of lesser-known cases thrown in — that of JP, a Malayali man who pretended to not know English in Tihar jail, of Rehmana, accused of aiding Arif, her husband, in carrying out the attacks on the Red Fort in 2000, and Wahid, an English teacher, who was reportedly tortured until he was made to confess that he had links to the Mumbai train bombings in 2006.

Choudhury doesn’t focus on crimes, as much as the jail-time that came with them. Most of the defendants, understandably, underscore their interviews with their innocence, and it really isn’t up to the reader to act as judge and jury here. But detached reading is hard when Choudhury describes the kind of treatment given to influential criminals, with some getting air-conditioning, their own cells, extended visits and better food, while others are denied even basic human rights.

In chapters like The Gangrape of a Trans Bar Dancer in Custody and Waiting for Justice at 70, it is difficult not to feel miserable while reading about the way Khushi, a transwoman and Kobad Ghandy, accused of being a CPI(M) leader, were treated in jail. Ghandy wasn’t given proper healthcare for his eyes and prostate, let alone food; and there are graphic depictions of the sexual assault and violence that Khushi had to endure at the hands of the police. The jails aren’t pretty, with terrible food, enforced social hierarchies, sexual assault, the constant threat of violence, and the “bladebaaz”, or prison hitmen.

But if you have an obscene degree of ‘pull’ even jail can be awesome apparently. As one is to assume from this line from Anca Verma, wife of Abhishek Verma, who called it ‘her honeymoon.”

One Response to “Prison Break: Sunetra Choudhury’s New Book Shows Us What Life Behind Bars Can Look Like”