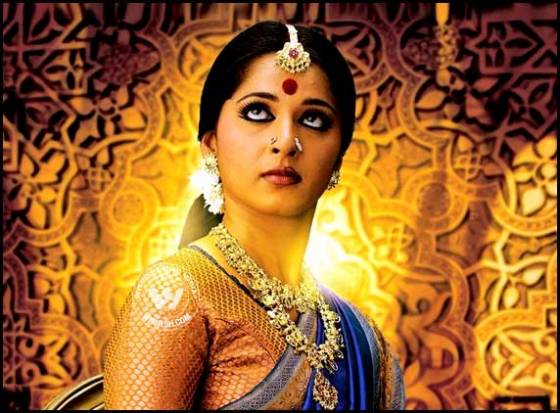 This is a story about bindis, I think. My father has always wanted his daughters to wear bindis. Uncles from abroad with Grinch- like smiles would come down to India once a year and tell us why girls should wear bindis. Something about keeping the third eye powerful. We don’t want three eyes, we would say. We learnt not to give in to bindis and so even now, none of the girls in the family wear bindis.

In 2009, my cousin, another third-eye denier, demanded that I watch the Telugu film Arundhati, written and directed by Kodi Ramakrishna. “It’s our kind of film,” she winked. This was incredibly important to me and I listened only because this was the cousin who had cried joyfully and had evoked all the gods, known and unknown, when I told her that JK Rowling was a woman.

And so in five minutes she told me the story of Arundhati (Anushka Shetty) and her epic battle against the evil Pasupathi (Sonu Sood). Arundhati is the reincarnation of her predecessor Jejamma (also Anushka Shetty) who has returned to destroy Pasupathi for good but doesn’t know it yet. Jejamma has left her a weapon to kill him with and Arundhati has to find it before he rapes her. He is dead but his spirit can rape too. This is because when Jejamma kills him for the first time, the damn Aghoris bring him back to life and teach him black magic which makes him invincible and that’s why Arundhati must now embody Jejamma. So I sat with seven of my cousins that evening, to watch Arundhati on an old and battered desktop.

Cut to July 2015. I am sitting in my Journalism Arts & Culture class. I am the lone surviving Bollywood/Tollywood fan girl/teacher in a class that’s half full of students who despise all woods except Holly. A fight has broken out between Christopher and me. Christopher is a student and a staunch follower of his namesake Nolan. We are still fighting an old battle from six months ago. Then it was Hollywood vs Bollywood. Presently, it is Mallu movies vs Bollywood. In a matter of minutes it is going to be Art vs Commercial, Intellectual vs Dramatic. I have cast aside his Inception with my Dabangg, his Dark Knight with my DDLJ and finally his 22 Female Kottayam with my Arundhati.

Arundhati is the first movie that I watched which had a female lead kill the villain with no help from a man. But the students don’t look impressed. They are perhaps still recovering from the shock that some woman reincarnated/horror bullshit was chosen over 22 Female Kottayam. It was then that I fully realised the feminist utopia that is Arundhati.

Arundhati, in a silk saree with a gazillion gold chains and bangles, and her trademark big red bindi, is leading a board meeting in the palace à la Bipasha Basu in Corporate, only better because Jejamma is pulling a Bipasha Basu without unwrinkled pants and crisp cotton shirts. This was strange for me because up until then, I had only seen silk sarees on aunties I was busy running away from. Or on my mother, who would coax me into wearing sarees. They would come bearing hope, their smiles too bright, their sarees too shimmery, to ask me if I wanted to wear their ‘extra’ silk saree. I would mumble something and bolt across the hall to find other girl cousins escaping their Silk Saree Godzilla aunties. We didn’t trust anybody who just happened to carry an ‘extra’ silk saree. Jejamma was perhaps the first woman to show me that one can wear silk sarees outside of wedding halls and be fultoo boss about it.

Now and then Jejamma has her Mother Teresa moments, but she’s also not falling in love, and that was what thrilled me. I like it when the women in movies kill lots of bad guys in the beginning and don’t fall in love in the end. When I am telling him all this, Christopher has buried his head under the desk in a passable imitation of an ostrich dodging routine dangers, while also dealing with multiple cardiac arrests.

This is a movie that has its female lead leave home at midnight so she can go pick up her lost boyfriend (read ghost ghost ghost, but still) and the only explanation she gives to Ramu kaka is “be back in 10”. When the movie begins, they are all celebrating Arundhati’s marriage to her long-term boyfriend. And celebrating how? A dozen of Arundhati’s bald and aging uncles are jiggling bellies with each other. I noticed with glee how the men in the movie seem to only appear when somebody is getting married, which simply means that the men in the movie are Ekta Kapoor’s heroines.

Jejamma’s father, for instance appears well-dressed and gyaanfull in all the festivities. He is there looking pretty when both his daughters are getting married. He is there still looking pretty even as a 13-year-old Jejamma gets her brother-in-law (Pasupathi) beaten and banished from the kingdom. If you have been watching this movie for 30 minutes, you will stop finding it strange that the men who have been politely invented for festivals disappear from the screen when Pasupathi rapes and murders – no, murders first and then rapes – Jejamma’s teacher.

Arundhati released in January 2009, seven months before the blockbuster hit Magadheera. Both these movies are based on reincarnation. But it’s interesting to note how Magadheera (starring Ram Charan and Kajal Aggarwal) went on to become a super duper hit, resting solely on its hero and his pretty horse. The hero has to realise his reincarnated self for the movie to progress. Never mind that the heroine is oblivious to her past, present and everything else, much like she is oblivious to the movie itself. They could have just had the hero romance the damn horse and it would still be a hit.

There are various scenes in Arundhati where her sword-holding style is spoken of with great admiration by men and women alike. That’s why, when I look at Arundhati, I am also looking at the massive response to Magadheera and Bahubali (both by director SS Rajamouli). It’s more than just the dearth of male characters in Arundhati that makes up for everything that Magadheera does not have. For every time Kajal Aggarwal is shown struggling with her dupatta, Jejamma has killed Pasupathi twice. In one amusing scene, a baba, who is trying to convince Arundhati that she is the reincarnation of Jejamma, throws a sword at her, and she catches it effortlessly. In Magadheera, the hero is the ‘sword’ who has to bring this realisation to the heroine who, I think, only wants to be left alone with her forever flying dupatta.

In Bahubali’s infamous song, the hero must take off the female warrior’s clothes to shame her into seeing that she is “woman”, and what’s worse is that she becomes it. There is a similar scene that occurs in Arundhati. This is when Pasupathi comes back stronger to kill Jejamma on what appears to be her wedding day. He takes off her clothes and she is helpless and dancing in one scene but in the next, she has managed to trick him with her dance, and strap him to a bed with the help of two swords. She then brings a chandelier crashing down on Pasupati’s face and he is rendered speechless, literally.

We also know nothing about the faceless/nameless man Jejamma is marrying, and it looks like neither Jejamma nor the director cares about this. And that’s ok, because he doesn’t come crashing into existence at the exact moment that Pasupathi is about to rape her.

The weapon is not Arundhati’s fiancée or Jejamma’s mysterious husband. This was basically enough for my cousin and I to dress up like Jejamma for weeks after that, wearing big red bindis and putting haldi on our cheeks, catching various people and offering them money to call us Jejamma. But nobody ever did. It made my father a little too happy that I was wearing a bindi and he looked annoyingly pleased, so I took it off. But I insisted on being renamed Jejamma.

Forget Celebs, Here’s How Internet Heroines are Saving Us One Day at a Time

8 Responses to “Ta-Ta, Bahubali. I’d Much Rather Be Jejamma”