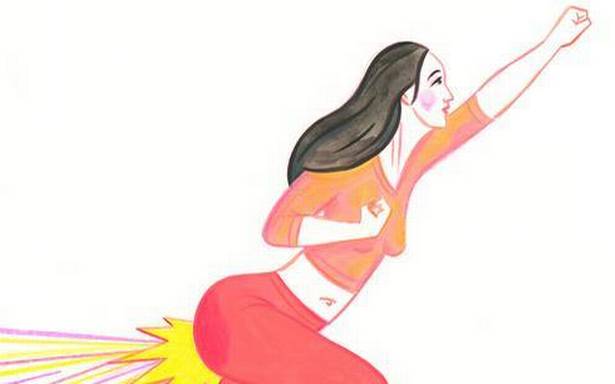 Ludmilla Bartscht’s Juicy Lucy is a pineapple who gets flak for not having shaved, Larissa Bertonasco discovers that all her life-force is stored in her bum and Priya Kuriyan asks the important question, “Whose Bra is it Anyway?” All these seemingly odd stories are part of a new book of graphic tales by 16 female comic artists from India and Germany, called The Elephant in the Room: Women Draw Their World, edited by SPRING, a collective of women artists. The group of 16 came together in 2014 when the Goethe-Institut New Delhi and the publisher Zubaan organised a workshop for Indian women cartoonists led by Bertonasco, Bartscht and Kuriyan, all established graphic artists.

The foreword, written by author and artist Manjula Padmanabhan, blames various ‘elephants’ in the room for various fears and insecurities that women continue to hold. “Why are so many of us crushed by social pressure until we ourselves no longer believe in ourselves?” The answer, she writes, is elephants. If the collection seems random to anyone, they have only to read Padmanabhan’s foreword which ties in all the various stories told by the artists in the book by explaining that the aim is to “capture the experience of being women.” 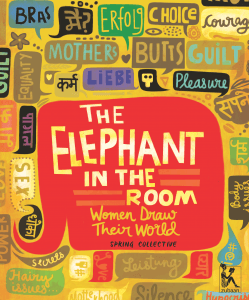 Sure enough, the stories address those elephants in every room that has women in them. From the vagina to motherhood, body image to rape and domestic abuse, the book travels fluidly through different themes even as the artists deploy dramatically different styles and tone for each story. While the styles themselves are reflective of each artist, the stories are often focussed on different lived experiences based on whether the artist behind it is Indian or German. While some of the Indian stories reflect on family life – decisions like not having children and grandparents – the German stories speak more openly of sex and romantic relationships. However, nearly all the stories will find appeal among an urban Indian audience.

The stories and styles speak of common insecurities, perceptions of relationships, rebellion against the norm, reclaiming taboos and often just day-to-day life. This is not a collection of shocking or strikingly unique stories. It’s a collection born of the daily lives of women – pointing at the larger stories of stereotyping, patriarchal expectations and gender-based struggle that most of us still ensure.

In Bartscht’s Juicy Lucy, a pineapple navigates her way through the world of fruit while people judge her for not shaving. She navigates the blues by crying till she’s returned to her normal colour and she deals with her period. One entire strip titled Joy is nothing but Juicy Lucy dancing from start to finish. 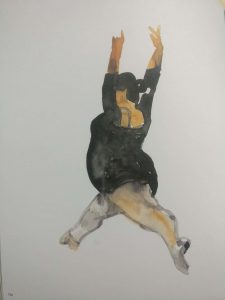 Bertonasco’s story Bum Power talks about her discomfort and insecurities with her bottom, which she always thought was too big. And how through the course of childbirth and living her life, she realises that she was actually quite fond of her bum after all.

In Whose Bra is it Anyway? Kuriyan daydreams about the possible owner of a beautiful red lacy bra that was left behind in the guest house where she was staying. She later realised that the woman who came to retrieve it, matched none of her imagined people, and because of this reason, was much cooler.

For a woman reader, at least, it’s easy to discover a story here that speaks to you with personal urgency – for me, it was Archana Sreenivasan’s Otherly Urges. Sreenivasan tells the story of how she is absolutely certain (most of the time) that she doesn’t want children, and talks of people who have trouble accepting this and those who see it as perfectly normal. 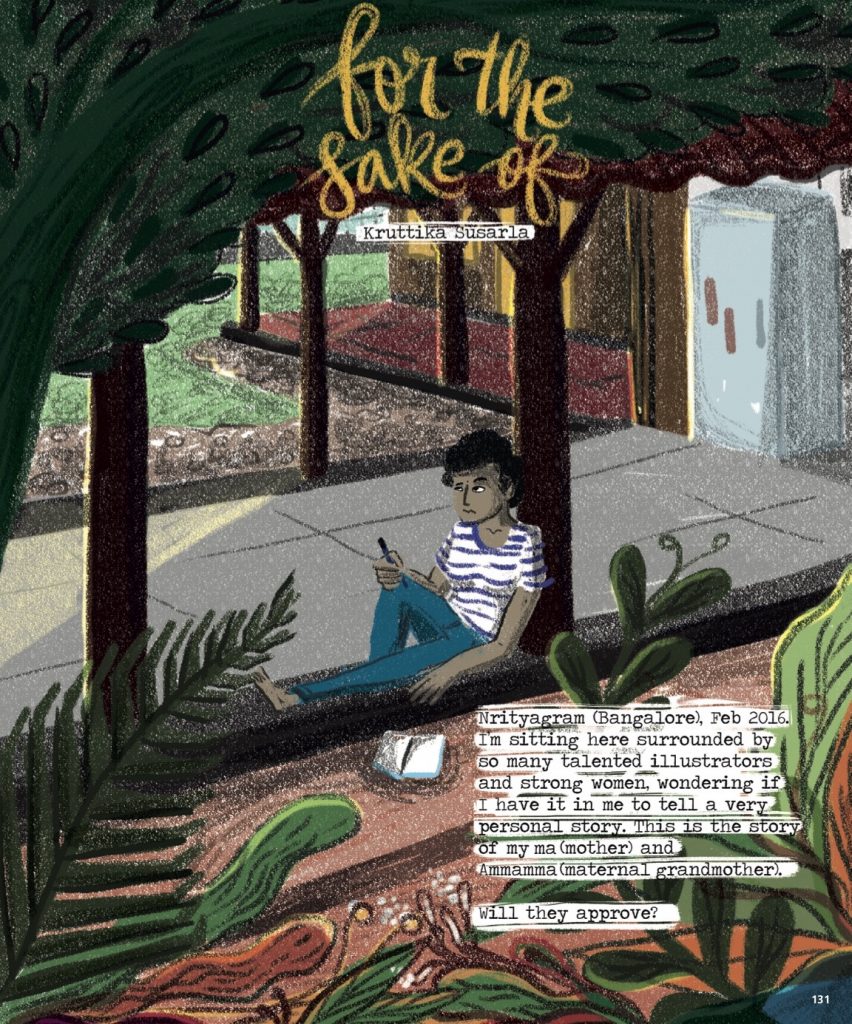 This book is unusual in how it takes up women’s experiences in a lower register, without capital letters. Most of the time, women-focused storytelling aims to scare you or uplift you with examples of women either overcoming struggles, or being the first to do something, or succumbing tragically to some struggle.

The stories collected here are not on such themes. The one time that rape (a sadly common theme in stories about women) is mentioned in the book, it’s a throwaway reference made by artist Ulli Lust who, in her piece Freedom versus Security, talks about how she enjoys walking about in cities and travelling. However, she ends by saying that she now prefers largely to spend time at home. While there is not a tinge of sadness to this statement, the story does leave you wondering why she now prefers the comfort of her home. Is it because of a sense of security that she doesn’t feel in public spaces or is it simply an evolution of her own desires that have led her to feeling content in her own space?

Compared to Marjane Satrapi’s amazing Persepolis, which Padmanabhan credits for opening “a giant portal” for many other women artists, this collection is distinct. While retaining a sense of humour, Persepolis, with its black and white style and tone retained a heavy backdrop of violence and political turmoil. The Elephant in the Room prefers to talk about smaller personal achievements and realisations. About women and their relationships – with themselves, their bodies, their families, friends and society. 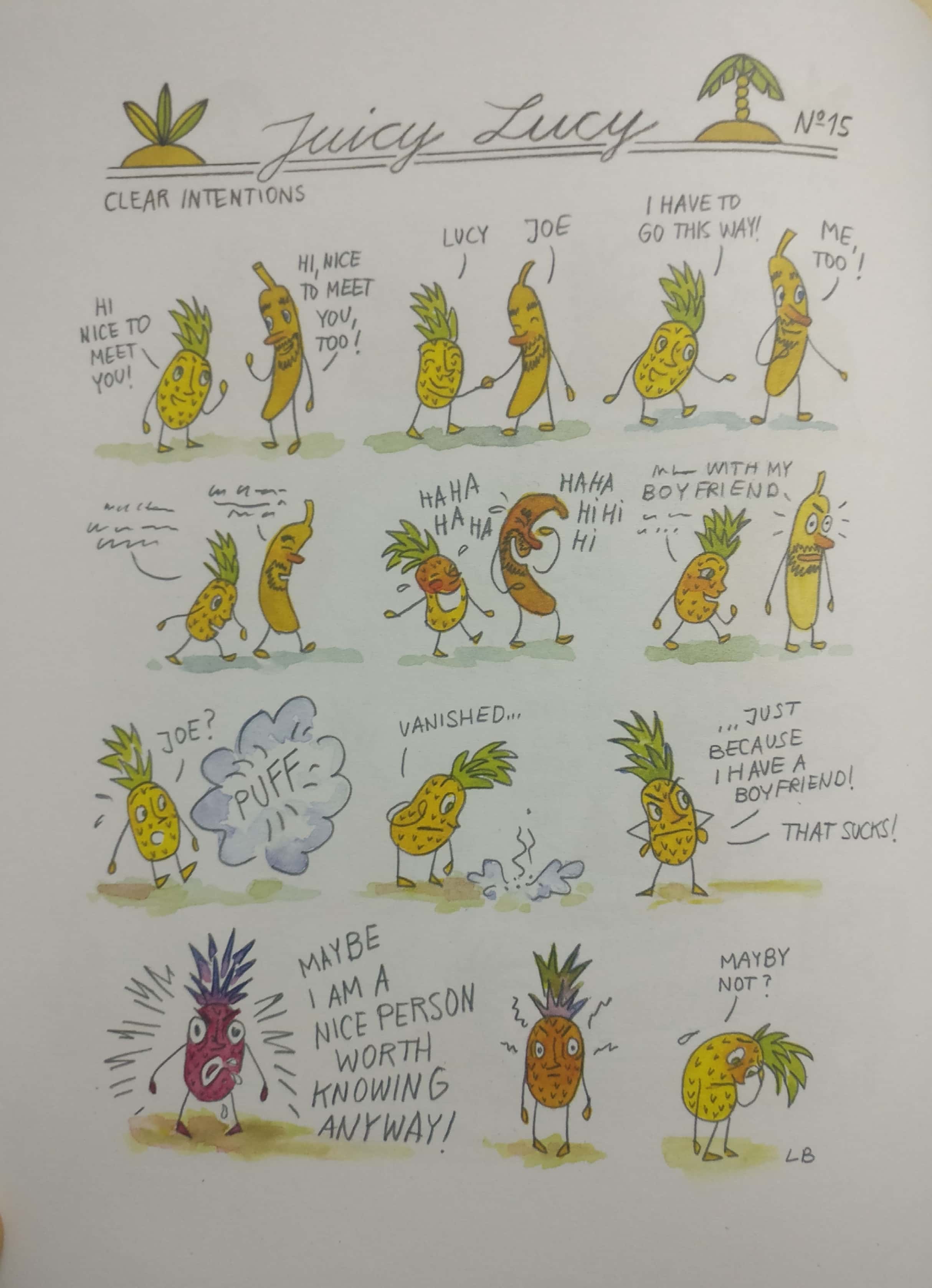 The other peculiar thing about this book is how it manages a calm, almost serene tone even as it talks of rebellion, self-discovery and carving one’s own way in the world. Despite addressing elephants in our rooms, the stories actually follow the simple patterns of regular life. From developing affection for a woodworm to feeling like a battle-hardened fighter because a spider has been vanquished, to being fascinated by the hair growth triggered by puberty, these stories tell tales that nearly all of us are actually familiar with.

Would men reading this book find it discomfiting? Since they’ve never experienced what it is to be a woman, I can’t say how these women’s artwork will strike them. Women are used to being overlooked in fictional or real narratives, so much so that often it takes a certain amount of awareness for a woman to spot this absence in a story. Even more interesting is how the stories in this book don’t actively try to cut men out of narratives – they are present only in relation to women, as boyfriends, husbands, fathers and grandfathers. Let’s hope seeing the world through the eyes of a woman so visually is invigorating for both sexes.

Photos courtesy The Elephant in the Room

I Kept Feeling the Women’s March on Washington Lacked Passion, But Then I Figured the Real Problem