Have you been following the Commonwealth Games in Glasgow? The ladies are on fire! A glimpse at the medals they’ve won so far:

Day 1: Khumukcham Sanjita Chanu won a gold medal for weightlifting in the 48kg category, while Saikhom Mirabai Chanu won a silver in the same category.

In other sports news, here’s a peek at the people training for a spot on the women national football team, and just how far some of them have been willing to go to keep playing. And a Q&A with the team’s no. 1 fan. 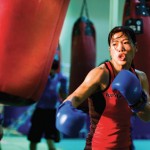 Is the whole PC-playing-Mary Kom thing getting your goat? A hilarious, frustrating reminder of how Bollywood rarely displays sensitivity when it comes to race, or er…anything.

Turns out that the UN’s announcement that ISIS had ordered all women and girls in and around the city to undergo female genital mutilation is plain wrong. The world will just have to find a new thingy as an excuse to fulfill their fantasies about rescuing Iraqi women.

The HRD ministry has advised schools to include third gender children. Meanwhile, the University Grants Commission has issued a circular stating that transgender students would be included in its scholarship and fellowship schemes.

A study says Indian women in the IT industry are paid far less than their male colleagues. 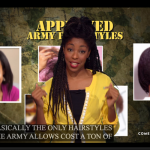 The Daily Show’s Jessica Williams shows how ridiculous the US Army’s rules on approved hairstyles for black women are. And why she has a weave.

20 classic stories in the New Yorker (if you haven’t been diving into their newly-opened archives yet, what are you waiting for?) written by women.

A senior police officer has been booked in Mumbai for raping a model. In Bangalore, a CRPF cop was handed over to police for ‘misbehaving’ with women on a bus, but the police merely let him off with a warning. In Gulbarga, police tried to browbeat a 13-year-old girl’s parents into accepting money from a group of men who raped and assaulted her.