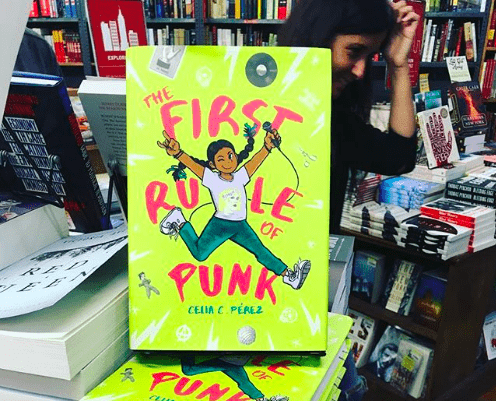 Brown characters often seem one-dimensional in popular media because they are: they’re so often just reduced to really odd stereotypes or are meant to serve as the ideal representation of an entire community. This reduces them to identities rather than actual personalities.

Celia C Pérez’s new work falls into neither of these categories, and instead just drips awesome. Pérez says that accurate literature or representation of Latina women is hard to come by, and her debut children’s work attempts to fix that.

The First Rule of Punk tells the story of 12-year-old María Luisa O’Neill-Morales, or, as she prefers to be called, Malú, who moves away from her beloved father to live with her mother, whom she sometimes gets into tiffs with, in Chicago. Negotiating a new middle school and all the social pressures that come with it as well as her mother’s insistence on her embracing her Mexican cultural tradition, Malú begins to feel stifled.

But she then remembers what her father told her was the golden rule of punk rock: to always be yourself. Malú and three others start a band called The Co-Cos, a play on the word “coconut”, which is what a mean girl calls Malú to imply that she’s “brown on the outside but white on the inside”. Through the music, she discovers herself, and different histories and parts of her bi-racial identity.

The book feels like a nice way to talk about really important issues without caricaturing race. Pérez says she was inspired by her own experiences of growing up as a brown-skinned daughter of immigrant parents in a city with a high population of Latinos, although the book is not autobiographical.