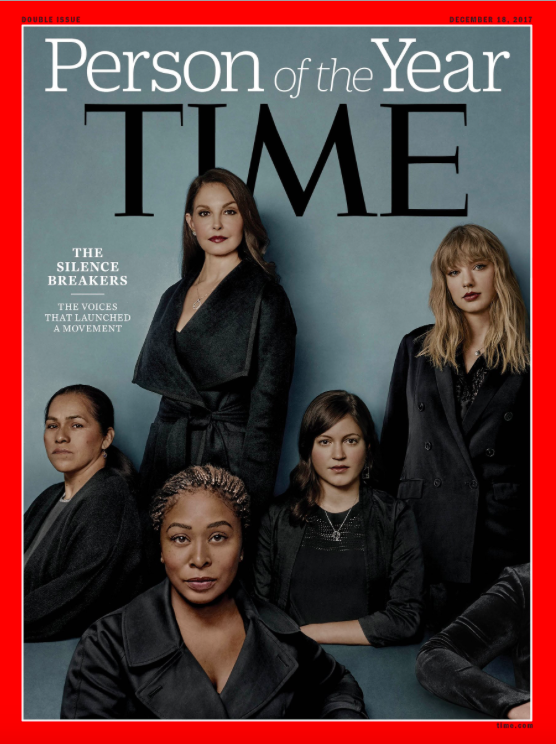 There are five women and a disembodied arm on the cover of TIME Magazine’s Person of the Year Issue. They are meant to represent The Silence Breakers — the millions of women worldwide that spoke out about sexual harassment in 2016. This has, surprisingly, been a controversial choice, but to me, nothing could have been more satisfying and appropriate.

The women on the cover are Hollywood actress Ashley Judd, whom many credit with “launching” the global “MeToo” movement of breaking silence around sexual harassment with her public allegations against producer Harvey Weinstein in October, Isabel Pasqual, a strawberry-picker and immigrant from Mexico who spoke out about her stalker, Adama Iwu, a corporate lobbyist who fronted an open letter about rampant sexual harassment and misconduct in California politics, Susan Fowler, an ex-Uber engineer who triggered a wave of resignations of sexual harassers in Silicon Valley after she posted on social media about Uber’s toxic work culture, and pop star Taylor Swift, who testified in court about being sexually harassed by a DJ right before the Weinstein allegations broke. The arm, ensconced within TIME’s iconic red border, belongs to an anonymous hospital worker from Texas, who fears for her family’s safety if she speaks out. She appears as an act of solidarity, representing those whose silence can’t be broken yet.

Each woman on the cover represents a distinct set of identities, economic and social locations, industries, and immigration statuses. Even a cursory glance at this assortment of women is enough to understand the universality of the experience they represent, and the mighty significance of the movement at large.

But looking at it closely feels like gazing at an allegorical painting full of hidden codes. While the covers paints an obviously commanding, loaded and powerful (albeit US-centric) picture, it’s also the kind of image that allows you to bring meaning to it.

When I look at it, I see Iwu, a woman of colour employed by Visa as a corporate lobbyist to the most powerful men in California, and wish Tarana Burke, the activist who first coined the phrase MeToo back in 2006, was standing next to her. I feel gleeful when I see Swift, who was hissed at for half of 2016 for being the epitome of white feminism (mostly because of a pointless spat with Kim Kardashian), and whose kick-ass testimony in her August sexual assault case went pitifully under-reported by the media. But she is finally being recognised now as part of a movement that was born in show-business.

When I look at the cover, I could believe Pasqual the strawberry-picker is an undocumented migrant (she isn’t), the anonymous hospital worker is disabled (who knows?) and that Ashley Judd’s real name is actually Kangana Ranaut. There’s no reason to believe any of these things, and they’re all (probably) untrue, but that’s not the point. The women on this cover are powerful, emotive representations of universal experiences and feelings that offer themselves up to make of them what you will.

The sheer number of thoughts and feelings that the cover can mean to different people is the perfect representation of how far-reaching, complex and consequential #MeToo has been, and the variety of women who could connect with it.

The cover may feature American women, but the #MeToo movement was felt globally. #MeToo became #SoyTambien in Spain and Latin America, #AnaKaman in the Arab world, גםאנחנו or “us too” in Israel, #QuellaVoltaChe or “that time” [to speak about harassment] in Italy, and #BalanceTonPorc or “call out your pig” in France.

India’s biggest #MeToo controversy came totally out of left-field. On 24 October, California-based Indian lawyer Raya Sarkar published her crowd-sourced list of men in (liberal) academia, accused of repeated sexual harassment under the Vishakha guidelines. Later that night, a group of academicians and feminists like Kavita Krishnan, Nivedita Menon, Ayesha Kidwai and Vrinda Grover released a “statement by feminists” on this list, opposing its supposed arbitrariness and lack of due process.

It provoked an unprecedented discussion on power and caste hierarchies within the Indian feminist movement. Those behind the statement were called out for abandoning principles they had espoused in the past in favour of minimising the damage to men of “their own kind”— Savarna liberal academics. There were inferences drawn from the castes of the accused men and of women who opposed the list, as well as of Sarkar herself. It also provoked discussion on inter-generational fissures within the women’s movement, and the role of social media as a feminist tool.

So in India, the #MeToo moment, instead of simply remaining an opportunity to discuss sexual harassment, became a unique moment designed for Indian feminists to make a badly-needed introspection of their own discourses and practices.

Surprisingly, given that the movement was born in Hollywood, it bypassed Bollywood entirely. Some actresses, like Swara Bhaskar and Priyanka Chopra, mentioned experiencing sexual harassment without naming names, so it was about as startling as if they had confessed to using lipstick. Richa Chadda sounded almost worried at the prospect of Bollywood’s #MeToo moment when she said, “When Bollywood opens up about sexual harassment, we will lose a lot of heroes”.

Even where #MeToo hasn’t turned into a full blown storm, everyone’s aware that the seeds have been planted.

Of course, the movement (and TIME Magazine’s choice) wasn’t without detractors. While women were sharing their experiences of sexual harassment, many men on social media complained that they felt “excluded” from the movement. This even prompted an intriguing essay in the Feminist Current on why men should be excluded from the narrative.

Some women, like actress Gabrielle Union, chose to exclude themselves, noting that #MeToo was spearheaded by white women, which is why it grew to be so powerful, and that if the women involved had been black, they wouldn’t have been believed and supported the way Judd, Rose McGowan and Angelina Jolie were this year. It’s also true that #MeToo failed to pick up back in 2006, when it was originally coined by Tarana Burke, who happens to be black. Others pointed out how the #MeToo social media campaign, which involved outing yourself as a victim of sexual violence, placed the emotional labour of the movement squarely on women.

“The pain of Hollywood white royalty was prioritized.”@itsgabrielleu explains how the voices of women of color within the #MeToo movement have not been heard: pic.twitter.com/NgLweJDRTS

Meanwhile, Facebook’s Sheryl Sandberg warned the world of the impending backlash against #MeToo, revealing on Facebook that she’d heard rumblings of men listing this as yet another reason why you “shouldn’t hire women”. We’re still awaiting US president Donald Trump’s reaction to TIME Magazine’s decision, but it’s bound to be good. He’d tweeted recently that he was offered the title but turned it down, which TIME has denied.

But TIME’s choice wasn’t even popular with its own readers. Their reader poll felt that Mohammed bin Salman, Saudi Arabia’s new crown prince and the force behind the war and humanitarian crisis in Yemen, was worthier of being named Person of the Year than The Silence Breakers.

Perhaps even this resistance to recognising The Silence Breakers shows you how powerful and unsettling their actions have been this year. Because it must take some wilful suspension of disbelief to imagine that any other person or movement this year has rocked the earth the way women have. This year, The Silence Breakers sent powerful men, from spheres as far afield as politics, academia and stand-up comedy, running for cover. Maybe 2018 will be the year we find them.

One Response to “When I Look at TIME’s Person of the Year Cover, I Believe Ashley Judd’s Real Name is Kangana Ranaut”