HomeCultureVogue Just Doesn’t Get Why We Wanna Watch Ou ...
September 29, 2016 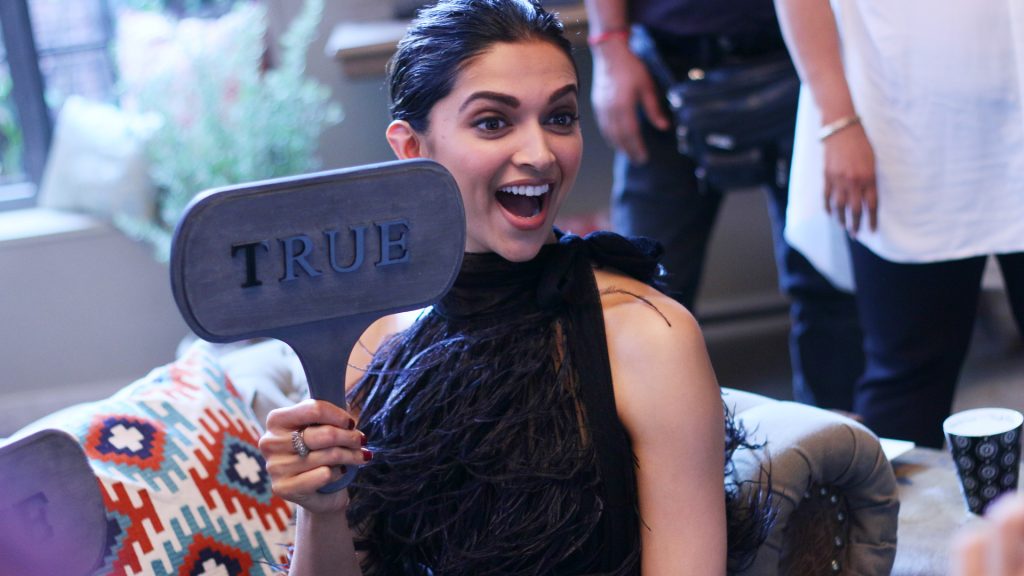 Did you know that Deepika Padukone loves to sleep? Or that if she could steal one thing and get away with it, she would steal food? Did you know that her haircut is called the long layered cut, and that the last thing she Googled was the meaning of a word she can’t remember?

I learnt all this when Vogue launched its new talk show, Vogue BFFs, on Colors Infinity that aired last Saturday. It brought host Kamal Sidhu (a friendly blast from the past) in conversation with Padukone and her best friend and fashion stylist (also Vogue’s Fashion Director) Anaita Shroff Adajania, and if you expected fun, interesting conversations, you didn’t get any of it. What you did get, was to be easily distracted by the fancy set, which you are to assume is Sidhu’s loft, and stare instead at the most random set of masks, strategically placed cups with sayings about tea and love, fairy lights, bookshelves, and some rather pretty lampshades. Presumably because conversations are more relaxed at home.

Vogue BFF’s promo suggests that the idea behind the show is to bring together a celebrity with their best friend from the fashion industry — people they interact with not just to get the perfect look for the characters they play in movies, but even for their other public appearances. For this episode, we learn, Padukone had styled Adajania in jeans and a black top, and Adajania had made Padukone wear a feathery black top (Michael Kors Collection) with black slim trousers (Victoria Beckham). 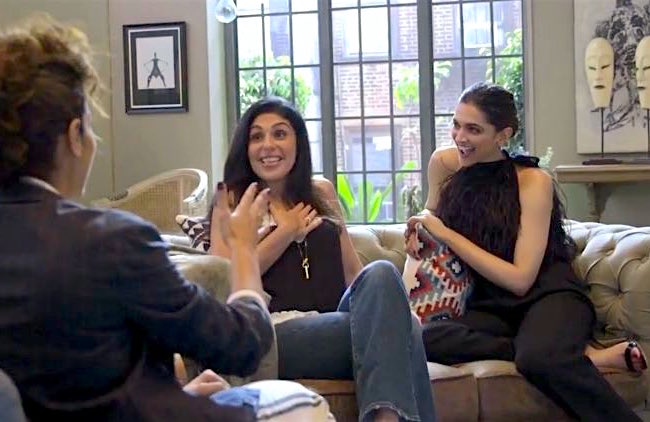 The reason I’d watch a talk show marketed as a conversation with a celebrity and their best friend, is the fun of seeing them in conversation with each other, because we never seem to get enough of them. There’s a moment in the conversation between Padukone and Adajania that makes a gesture towards such a talk show and such a desire: as a viewer, you’re given a glimpse into the life of Padukone as she describes, standing clothes-less in Adajania’s room for a fitting, as she [Adajania] is breastfeeding her baby son. “Do you think he’s looking?” Padukone said she had asked. But alas, this is one of the extremely rare moments in which you can see a relationship between them both, and this comes suddenly, in the middle of an otherwise boring conversation, where all you learn is that Padukone’s favourite shade of lipstick is bright red, (not even a controversial meme-generating, to be defended to the death, Aishwarya purple.) and that she loves food, especially her ‘cheat meal’, which is a big sea salt cookie with ice cream.

Vogue BFF’s pilot, which was supposed to reveal to us secrets about Padukone that we didn’t know, most certainly doesn’t do so. Let’s be real. You don’t really expect any secrets to be revealed in a talk show. You simply expect to be entertained, to spend half an hour of your time being charmed, being taken by surprise at smart answers and the simulacra of spontaneity — for instance, did you watch Gina Rodriguez rap Nicki Minaj’s ‘Super Bass’ on The Tonight Show Starring Jimmy Fallon, and see Fallon’s expression of utter awe and disbelief? It’s easy to be addicted to The Graham Norton Show, where alongside well-practiced lines about whatever project they are promoting, guests like James McAvoy have ridden a unicycle; Meryl Streep has kissed Mark Ruffalo; Cumberbatch, Johnny Depp and Norton have posed for photographs imitating otters, and Ben Affleck ordered pizzas using a mic that made his voice sound like Batman’s. Or Koffee with Karan, where Padukone has in the past appeared with Sonam Kapoor and Priyanka Chopra, and they all made happily dismissive statements about men. Or Karan Johar’s infamous rapid fire round asking guests important questions like which actor they think are likely to have a mirror on the ceiling of their room, or a life-size poster of themselves.

For a non-depressing Vogue video, watch a good episode from the 73 Questions series, like 73 Questions with Kendall Jenner. Just over 7 minutes long (as compared to the 40 minutes that Vogue BFFs went on for), it was pure fun. Of course, the questions are staged, but Jenner doesn’t always bore us with her answers. The video is shot in the same way that Vogue BFFs begins — with Padukone striding into the house and walking around, while Sidhu asks her question after question. In the Jenner video, we enter her house and follow her as she walks around her mansion and swimming pool: we see an extremely large plant in a pot, strange looking sculptures, her mother’s closet with a lot of shoes, a gold statue. In the meanwhile, she’s also answering rapid-fire questions about who her favourite sister is, what her morning rituals are, how many shoes are in her mother’s closet, what her secret hobby is, which her favourite episode of Keeping up with the Kardashians was, whether she’d ever do a spin-off of the show, and what her secret talent is (at this point she breaks into making bird noises).

Perhaps a part of why Vogue BFFs is dull is because the conversation seemed to be slightly stuck on men, particularly Ranbir Kapoor and Ranveer Singh (who’s the better dancer, Padukone was asked) — except in the parts about fashion, where men cropped up only in reference to how sexy Padukone looked. In the end, you really wish that Padukone hadn’t told the story about the first time she heard of Adajania — when Ranbir Kapoor told her he found her hot, and Padukone went “hmmm”, because she was dating Kapoor at the time.

If Vogue BFFs had been done well and plugged into our own sense of conversations between best friends, then there wouldn’t have been any need for a game segment (that lasted more than 10 minutes), where Adajania and Padukone took turns to be blind folded and guessed what food was being fed to them, or another segment, where they had to answer questions about each other with “true” or “false”. Perhaps what would have worked better was conversation, since these two women are supposed to be best friends — surely they’d have a lot more to say to and about each other, even if it is by nervously giggling about awkwardness.

What Fashion Magazines Mean To Me: Mridula Koshy