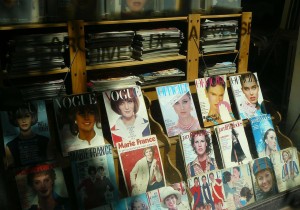 The heated debates about the Vogue Empower ad have spun off many other interesting conversations including the place of fashion magazines in cultural debates and feminism. Here is the first in a series of responses.

My sister and I were not so much interchangeable as we were one entity – two headed and one bodied – in our family’s eyes. We looked alike, sounded alike, and answered to the hyphenated ‘Mridu-Manju.’ And we were not unhappy in our matching clothes. The first I became aware of her as apart from me was when my father returned from a trip abroad with two dresses. One was sleeveless, white to the waist and below that it seamlessly transitioned to horizontal stripes in red and white. The fabric was heavy weight, the dress subtly structured and the silhouette was A-line. A ravelling of the red and white striped fabric trimmed the arm holes and chased the neckline to the back where it opened in a darling keyhole. I wanted the other dress which I remember only as I saw it then and always since – pink, frothy and toothache sweet. My sister got that one.

By the time we were twelve and thirteen we were done wearing matching dresses and shortly afterward we ended up in bodies that were completely different not only from the ones we had been growing up in (principally knees and elbows and somewhere limbs akimbo) but also different from each other’s. This second difference was the more shocking of the two. Certainly the picture I had of me was getting complicated even as it sharpened.

She was an MTV addict. She listened to Echo and the Bunnymen and the Pogues, but modelled herself on Janet Jackson. She wore bodycon before there was such a thing. Also a bolero hat. Also some sort of jingly silver chain thing around her waist. And she was the Editor in Chief of her college newspaper and founded the campus chapter of the Black Student Union. (yes, yes, we are Indian). Still later, she shaved her head, leaving behind a Brahmin tail thing (no, no, we are not Brahmins) and decided that look was best set off with a spiked dog collar. A little askance and a lot amazed, I watched her trying on and discarding her way through the endless possibility of selves. And watching her, I puzzled my way through the question of who I was if I was not her in those clothes. A watcher, certainly, and not so much the doer.

Just before our college years, we both worked for a year in the heart of the garment district in Los Angeles. Somehow she got a job dressing models backstage at fashion shows and when she was sick I got to cover for her. We agreed the models had amazing bodies not so much for the protruding clavicles and hip bones, the coltish legs, but for the poreless airbrushed quality of their skin. She and I, in our bodies that were different from each other’s, had skin marked as the model’s skins weren’t – with scars, keloid and hyper-pigmented, stretch marks and pores.

It was that year I began my love affair with fashion magazines. I had always loved clothes And loved watching my sister dress up. So there was nothing but love for this format for presenting other people wearing clothes and more clothes – beautiful and ugly, artful and without merit, spare and excessive, meaningful and so trite as to be leached of meaning. There was nothing but love for the idea that the clothes, when stylized on these magazine’s pages, argued truths and falsehood I could debate.

Others have said about fashion that it is the stuff of fantasy. When I read a fashion magazine or scroll through my favourite fashion blogs I am only a little interested in the idea of fantasy, in the frustrating and pleasurable aspects of unattainability. I am interested instead, as I was when watching my sister try on her many selves, in the notion of clothes as self-discovery. As a way of trying on stories about the self, as many stories as there are selves.

I have never much ached over not being able to wear Ann Demeulemeester. Not when I can read the many stories her clothes tell in the pages of fashion magazines. And if these stories are significantly flattened by the fact that all the models who wear them are interchangeably of a type – many headed perhaps but always one bodied – I curse the lack of imagination and try, as intelligent people must, to compensate with an excess of my own. This is, often as not, a defeated effort, and I marvel the designers themselves don’t join their protests to the social activists’. Sadly, they don’t.

In the end it isn’t just the stories told by Demeulemeester’s clothes, or Kawakubo’s clothes or Watanabe’s clothes that are flattened. Our responses to them are, as well. The debate is narrowed to who should wear them on these pages. Everyone of course. And my sister among them. Not so much me.

Mridula Koshy’s novel Not Only the Things That Have Happened (Harper Collins India) was shortlisted for the 2013 Crossword Book Award. Her short story collection, If It Is Sweet (Tranquebar Press and Brass Monkey Australia) won the 2009 Shakti Bhatt First Book Prize and was shortlisted for the 2009 Vodafone Crossword Book Award. She blogs at mridulakoshy.blogspot.in.

One Response to “What Fashion Magazines Mean To Me: Mridula Koshy”