HomeVaanthiWelcome to the New (Online) Safe Spaces for Indian ...
November 19, 2015

Ever since news websites have reported their bile rising at BookMyBai’s discriminatory practices (not to mention at the Diamonds-Are-Useless-Gift-Your-Wife-A-Maid ad), BookMyBai founder Anupam Sinhal began to feel defensive. And that’s when the plot thickened. First he said:

I will be out of business if I don’t have the ‘religion’ filter on my portal.

Then he says, by way of In-My-Defense:

Once a Hindu employer who had used our site to book the services of a domestic help refused to let her in his house on knowing that she was Muslim, Sinhal tells me.

If Sinhal had a PR team, they would tell him that this is quite possibly the worst thing he could have said. To enable clients like the above to have their way is not a defense. It is a shameless encouragement and propagation of discrimination and exploitation on the lines of caste/class/religion. Yes, sometimes we have to do unsavoury things for clients, but in this case, “business” is not an excuse for BookMyBai’s religion filter. How would Sinhal feel if someone didn’t employ him on the basis of his caste or religion? Eh?

We almost feel sorry for his bad case of foot-in-mouth. But actually, no, we don’t.

Last month, an employer in Saudi Arabia chopped off her Indian domestic employee’s hand. And this month we’re hearing the story of a senior partner at McKinsey – an Indian – who exploited his underpaid domestic employee’s name to commit insider trading. And let’s only give the Devyani Khobragade incident a passing reference here. Because these are stories of foreign countries – they’re happening to ‘them’, not to ‘us’. But we all know that our very own, desi, home-grown stories of how domestic employees are treated, right here in India, are just as shocking.

This is why I was so intrigued by domestic worker agencies like BookMyBai.com, and classifieds that advertise for domestic workers, like BabaJob.com. Were they going to make things different, and in what way?

BookMyBai was in the news this month for their problematic ad saying, “Diamonds are useless. Gift your wife a maid.” Terrifyingly, that’s an ad for a product, not a service. The forum threads on the website have various current and prospective employers talking to each other – a virtual drawing room where you complain about ‘the servants’ rather than tell the truth – that if you were divorced, you’d get over it eventually, but it’s very, very, difficult to live without your domestic employee.

Let’s begin with talking money. Someone on one such thread says:

And someone else butts in:

Another thread confirms this going rate:

Moving on. A thread on English speaking nannies now:

Ho-kay, if that’s what you want, I hope you’re willing to pay for it. But…

By which I assume they are worried English speaking maids in Mumbai know their rights.

Bored of talking money? Okay, let’s get to the next topic on the next thread:

Like, the problems with this here above declaration are so numerous that I don’t even know where to start. Hmm. How about the class-based discrimination – “torn clothes”, “beggar”? It’s called P-O-V-E-R-T-Y! Spell it out if you don’t want your toddler to learn this bad, bad word. And the blatant casteism – “smelled badly” – really? It’s a slippery slope from smell to touch to finding that a human being – a real live human being – offends your senses. Have you never heard of putting yourself in someone else’s shoes? As we used to say in school: Shame shame, puppy shame.

Which brings us to the concept of shame. Nobody on this forum seems aware of their tone, the way in which they’re talking about another person. They seem not to think that their declarations could be problematic. I hate the sentence “Sharam nahi aati?” but just this once, it seems very, very apt.

Tired of the ancient caste and class based issues? Bookmybai takes its last bow here with some nice modern NSA style surveillance issues. Someone asks on a thread:

And receives the reply:

Well. “Meet the new domestic employer, same as the old one.” Wish there were flash mobs going off all over the net and the country singing Won’t Get Fooled Again.

In case you think there’s too much flash-mobbing and exaggeration going on here, let’s take a look at ads on BabaJob.com (which, by the way, was mysteriously represented in PM Modi’s Q&A session with Facebook in Silicon Valley). Keep an eye out for the salary on offer. Top left-hand corner. And ask yourself if you would do that work for that much money. 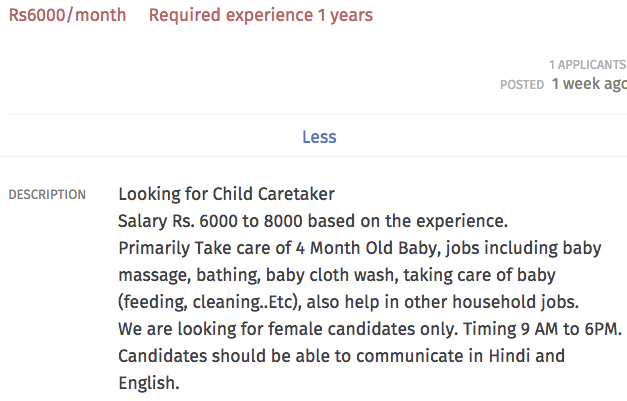 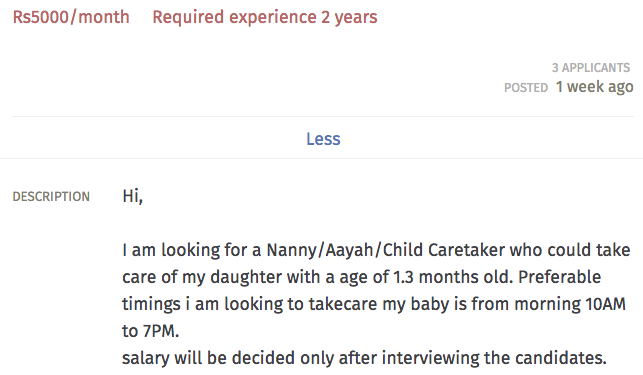 Plus, this fun, fun, fun advertiser who seems to like their employees as defenceless as possible:

Okay peoples, so who wins, BookMyBai or BabaJob? I say BookMyBai for sheer nastiness. But then, they’re not the same type of portal, are they? On BookMyBai, the website claims to supply a standardized service of guaranteed quality. The employer forums are a side dish. On BabaJob, there’s no claim. Just a set of guidelines for domestic employers devised by Bangalore-based human rights group Alternative Law Forum. Sadly, this well-intentioned page on their site is laughable after the ads we’ve seen posted there. And we haven’t even begun to explore this new world on the Internet. One thing’s for sure – I was naïve enough to wonder if an agency would represent domestic employees’ interests better than they could represent themselves. But after looking at the forums on BookMyBai, I’m not so sure. What I’m sure of is that I’ll never confuse a domestic workers’ agency with a domestic workers’ union again.