HomeWatchlistCinemaWhat the beedis mean to the ladies of Vajrakaya
June 14, 2015 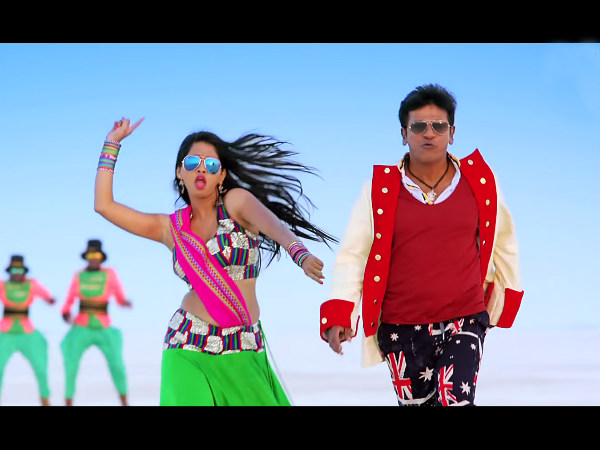 Vajrakaya is a macho fightfest in which the protagonist Veeraj (Kannada superstar Shivarajkumar), a Hanuman-avatar of sorts who beats up baddies and saves women from ‘eve-teasers’ and rapists and who loves no one in the world more than his mother, learns that he’s been adopted.

Flashback to 1980 in a place called Jungle Kanive (we never learn where this is, but the costumes and location suggest it’s Rajasthan), and we see how his biological parents had a forbidden inter-caste marriage. His mother Lakshmi (Jaysudha), daughter of a local warlord known as Huzoor, ran away to marry a social reformer who believed in non-violence, but when her father found them three years later with a baby in tow, he ordered the husband and baby killed. His daughter, he condemned to the same fate as the women in his community who dared to have inter-caste marriages: widowhood, and a lifetime of dressing in flowy black garments and too much kohl (silver lining: she’s spared having to hang out with these cartoonish ladies, who flock together and glare frightfully at the camera). But the baby is saved by one of Huzoor’s henchmen who runs away to Karnataka, where he raises the child as Veeraj, his oldest son. A now-grown-up Veeraj decides to go in search of his biological mother, to see if she’s still alive.

First things first. Shivarajkumar is 52, and totally looks it. Even as a joke, there’s no way he can pass off for someone born in the 80s. (But don’t worry, he has no problem romancing leddis in the film who look like they were born in the 90s.) The hero worship in this major blockbuster with religious overtones is also overdone and downright boring – for someone born to an ahimsa-loving reformer, “devatha manushya” Veeraj sure enjoys beating people to a pulp in endless repeat. But what this film does have going for it is an energetic and catchy soundtrack (Shankar Mahadevan and Dhanush – you heard right! – each sing a song here), gorgeous sets and amazing bright costumes – visually, it’s a wonderful treat. It’s an exoticised south Indian view of North India, providing a happy change of scene. And it gives Kannada actors the opportunity to dress up in colourful clothing and yell “Kutte! Kaminey!” “Haramkhor!”, and “Shaitan mera naam, galti mera kaam!”, all in heavily Kannada-accented Hindi.

Veeraj goes back to the village of his origin to see if his mother is still alive. He’s like Hanuman, he says, come to destroy Lanka. And Huzoor is an evil, casteist, hyper-patriarchal bloodthirsty man with intimidating facial hair (like all the other men else in his Rajasthani fiefdom): in this Hanuman-Lanka analogy, he’s Ravana. But really, Veeraj only wants to destroy Huzoor and his fiefdom so long as he’s not allowed to be a part of it. Eventually, he’s appreciated for being as macho as Huzoor and his men, and he’s welcomed in with open arms. By the end of the film, all ties are mended, and Veeraj is happily reunited with his true family – all talk of reform is conveniently forgotten. And the standard sexual violence-as-courting from the hero himself, homophobic and transphobic jokes are bound to horrify you.

But the film’s outlook to women in this very, very macho film isn’t entirely bleak, and throws up some pleasant surprises. We see the first girl that Veeraj falls in love with (Shubra Aiyappa) at the start of the movie (we never learn her name, and he refers to her as “Lambu” because she’s tall) in a song called “No Problem”, which has an energetically flailing Veeraj in a too-tight shirt singing about how it’s no problem that she’s taller than he is, he’ll still be in line on her “waiting list”.

Then there’s Pataka Parvathi (Nabha Natesh), Huzoor’s granddaughter, who makes one hell of an entrance: she rides in on a horse among a pack of riders, yelling and whooping as she manages to keep a beedi between her lips. She only ever wears aviators, bright, low-cut cholis, and even-brighter lehengas. She’s gorgeous, wild, shrill, loud-mouthed, childish and annoying. We never find out how such a creature manages to exist in Huzoor’s oppressive household, but no matter. She’s typical ‘item girl’ material, and you’ll find it hard not to be seduced by her colourful craziness.

But there’s also the unnamed kidnapped girl (Karunya Ram) who Veeraj finds on his travels and constantly needs saving – from her captors who, we’re led to suspect, plan to rape her; from men in a dhaba trying to feel her up, before perhaps raping her, and from unknown assailants trying to kill her when she stays at Huzoor’s household. She’s sweet-faced, well-mannered and constantly cowering, requiring Veeraj’s endless protection through the movie. (Although his handling of her while trying to fight villains is as rough as the villains themselves – it’s almost like she exists in this movie merely to be flung around.)

And last, but not least, there’s Veeraj’s mother Lakshmi, who he loves with single-minded devotion even though he doesn’t know her. (He’d always been an extraordinary son to his adopted mother, but he seems to forget all about her the minute he leaves home.) We get plenty of sermons through the film about mothers and how they need to be worshipped like goddesses (here’s why this is never a good idea), and protected and cosseted for their nurturing role in society. But Veeraj’s mother-obsession is downright creepy – there’s even a song picturised on mother and son in the way that it would be if it were about two lovers, with each thinking about the other and gazing longingly into the distance.

It’s never clear for most of the movie who Veeraj will pick as a romantic partner – will he go after “Lambu”, who walked away from him when she learned he was adopted? Will he marry the lovely, helpless girl who needs him around to ensure her safety? Will he, as a Hanuman figure, remain celibate, dedicated entirely to ensuring the happiness of his mother?

This is the movie’s best bit: he picks Pataka Parvathi. Or rather, she picks him. She tells him how she feels about him, and how he makes her heart race (and pulls his head to her colourful bosom to listen for himself). He says, “I love you.” She says, “I love you too!” And he pulls out a present for her from one of his pockets. “Beedis!” She squeals in delight. And the deal is sealed.

To an audience trained by Indian cinema to immediately discount the bold crazy girl as a love interest (unless some incident puts her in a demure saree and tames her wild nature), Parvathi, the archetypal bad girl, never seems to present herself as a genuine romantic option, making the mutual declaration of love such a thrilling event (even if it’s a somewhat abrupt turn of events – Veeraj’s relationships with all women barring his mother are rather brief and cold). Especially as she doesn’t change after this event – the beedis remain firmly between her lips.

And what about the Bechdel Test?

Kajol Should Have Got Blood, Not Breakfast from Dhanush