I joined WhatsApp in 2015. Because my father insisted. It would be a more convenient way to stay in touch; it’s a lot of fun, he said.

Soon, I was added to existing groups of family and friends both in the US and India. The usual jokes, memes and feel-good mantras that ping and rebound across the world quickly followed. I learned new tricks, became savvier with each app update. It was fun to reconnect with old friends and cousins. Everyone looked amazing in the pictures they shared. The world had never seemed smaller. This thing was genius!

Then came the steady stream of sexist jokes about bitchy wives who oppressed their husbands, and how shaadi is barbaadi — for men.

It wasn’t only the men who were sharing these jokes; it was the women. And these jokes multiplied like blowflies.

Did you ever get the one about Americans calling their wives “honey” and Indians calling them “Bee-Bee” instead? Because they sting twice as hard. Or watch the video where the husband calls to complain to his mother-in-law that the product he got from her is a defective piece? Refund, please. The one in which a young girl asks a baba: Why do boys have all the freedom but girls are held back in their homes? Because boys are like iron and girls, gold. One keeps gold in a vault, that’s why.

Predictably, I began rebuking my friends and cousins — not my finest moment, I’ll admit. Everyone around me tried to tell me: “Be patient,” “don’t get so emotional,” “it’s just a joke, yaar!”

So many of the women in my NRI and Indian groups are sweet and kind, devout in their values and beliefs. But they put up with these jokes. Share them. Respond with thumbs up, clapping, and laughing emojis even.

These jokes do not offend them. I offend them more when I call out the sexism. “We respect women, yaar. This is just for fun,” was the universal defense.

I’m not so sure. They wouldn’t share maa-behen gaalis with such ease, then why such jokes? What is it about WhatsApp and our tone-deafness to the steady loop of misogynistic wisecracks? When will we become more aware of the cognitive dissonance between our well-meaning goals to empower betis amidst the daily contempt for bee-bees? At what point does the Lakshmi turn into a millstone?

It was hard to accept these jokes and their endorsements from friends and cousins who work hard at home and office, who love their moms, sisters, daughters, friends and co-workers. They are superwomen —hard working, raising wonderful, accomplished kids; they are kitchen queens who make the best food; they’ll make space in their lives in a second to help clean up, pick up kids from schools or parents from airports.

So how do these same women so easily dissociate the harpies in these jokes from their moms, sisters, friends, cousins, and colleagues when they cheer on painted shrew jokes? Did they know a single woman who behaved the way the joke-women did? Didn’t they actually know more men in real life, deaf and blind to working women, who won’t help wives with housekeeping or raising kids? Why didn’t they get upset when these jokes showed women as unwanted baggage dumped by the mayaka on the sasural? How could they be so comfortable and complicit with this daily bashing of women?

Or was I reading too much into the jokes themselves? Was I just being a feminist killjoy? Morphing into the strident joke-woman herself?

Nope. Or at least I hope not. 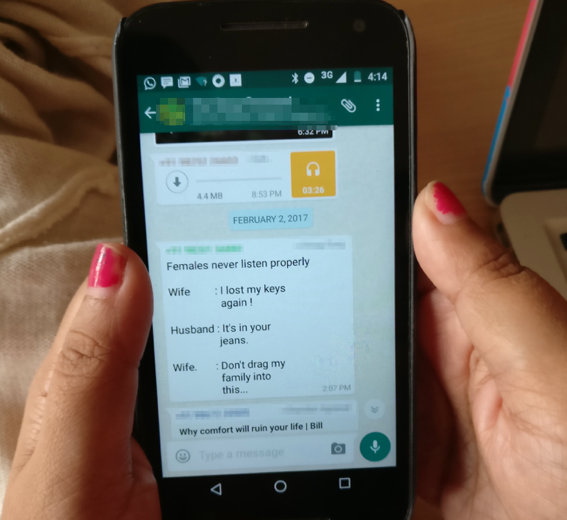 Humour is vital to social interaction. But I’m waiting for the day when jokes about Indian wives’ vanity, chattiness, jealousy, or pettiness won’t be amusing any more. I wait for the day when the husbands in these jokes will no longer get a free pass as victims.

Because this excusing of male entitlement and inexcusability of feminist outrage are one and the same, aren’t they? Such messages chip away at the work of feminism. If wives are already so powerful and men so meek then do we really need equal rights? And don’t tell me this is social satire. Satire punches up, not down. These jokes cluttering our notifications are adding up to some weaponised self-harm: Our unwitting forwarding of them shores up a mildly-bruised patriarchy.

This ever-advancing 21st century social media technology is managing to take us back to when it was normal to roast women on a daily basis. Growing up in India in the eighties, I had enough uncles who publicly made fun of their wives: “yeh to paagal hain!” “Don’t listen to her, yaar!” “Tum bewakoof ho.” Silently, their wives bore this everyday humiliation. Just as silently we kids watched this, almost coming to believe that this was normal marital expression. Fifteen years ago at a party thrown in my father-in-law’s honour an uncle introduced himself and his wife to my husband: “Main XXXX hoon.” Then he pointed at his wife and said, “aur yeh hain meri bimaari!”

This was before WhatsApp.

WhatsApp connects us, it’s fun and interactive, but its convenience enables a drip-feed of soft misogyny that is inoculating new and old generations, men and women. Every morning, the jokes tell us that women are never enough, and the thinnest possibility of feminist rage is always too much.

WhatsApp facilitates this recrudescence: It aids and abets a bimaar misogyny on an industrial scale. Old chauvinism is new again. We take one step forward and two back. Sure, this app has made women vocal, connected, empowered, and witty. Even safe when it comes to crowdsourcing vital information. But at the same time, this fun app re-animates and legitimises sexist snark in the name of bringing us closer.

And then it drives us further away. I feel the fraying of my bonds with friends and cousins that WhatsApp had first reunited me with. Two cousin sisters in India dropped out of a group right after I objected to the anti-women message in one of the jokes they’d sent. A friend let our chats languish because I could not see that these jokes were harmless. “C’mon yaar, they’re just jokes and if they make someone smile then they’re worth it.”

It was becoming clear: I couldn’t take a joke. I was breaking the invisible WhatsApp code of conduct: Shut up and forward.

Here’s one WhatsApp exchange in our group of about 15 Indian-American friends that became a low-grade screaming match about women and social media. The joke that started it was a video in which a wife after 30 years of marriage gets mad at her husband as she remembers the sacrifices she’s made all these years — she’s been having the lower half of the muffin and giving away the better half, to her husband. On their 30th anniversary, she’s a tad miffed about this unequal arrangement. The video ends with the husband lovingly telling her that “hutt pagli,” he knew all along of all her sacrifices and was letting her sacrifice the top half because she would loathe herself if she didn’t.

That there are people actually investing in producing such videos was just part of my irritation (a cottage industry of biwi videos has been created for the forward-loving-backward-looking on WhatsApp). I may have said nothing, but then many women in the group sent out “awws” and clapping, and prayer emojis. I commented that here was a perfect example of how men had conned women into being doormats and that this self-sacrificing tendency explained why women worked double shifts at home and office while silently accepting a 78 cents to a dollar.

My NRI friend, a working woman who runs her own business, told me that earning 78 cents to a dollar is perfectly fine because women don’t work as hard as men.

A few working women in the group demurred. No, women have to work twice as hard at work and at home, they shot back.

Sure, she said, but that’s exactly why women can’t give work a 100 percent. Because they have to work at home too. They’re stretched thin.

She had a point there. So I gave her an example of my husband complaining about Indian women in the American workplace. When I asked him why he was muttering to himself in anger at an email he said, “these Indian women are always asking for leave and days off for doctor appointments, school activities and kids’ illnesses. This wrecks our deliverables—”

“Do the white, black or Asian American women who have kids do the same?” I asked.

Exactly.  Could Indian husbands not chip in once in a while for doctor or school duty?

But see, speaking up works. Sometimes. That same friend who said that women don’t work as hard wrote back saying, “Oh yeah, Indian husbands! Inka hum kya karein! Why don’t they help out?” I felt I’d scored a small victory that afternoon.

But she still sends out similar jokes.

And right then someone sent out another video in which a family (son, husband and father-in-law) is giving the woman suggestions for dinner. “I don’t know what to make,” she whines. “I’ll make whatever you say.”

“Rajma bana lo.” No, she says. They just had it a few days ago. “Kadhi?” And on it goes. She rejects them all, one by one. The male trifecta looks on, helpless.

What Good Can Ever Come Out of Talking Politics with Parents? When Did it Get So Hard?

Tired of the Old Emojis With Barely Any Women? Here are Some New Ones

24 Responses to “Am I The Only One Being Driven Mad By Wife ‘Jokes’ On WhatsApp?”