Update: This post was first published on March 13th, 2014, in response to Air Force chief Arup Raha saying that women pilots were not suited to fly fighter jets. The IAF had been broadcasting this attitude as early as 2009. In December 2014, though, he turned around and announced that women pilots would indeed fly fighter planes soon. That never happened. Then, this week, Raha, who can’t make up his mind (wonder how he manages to fly a plane, let alone a fighter jet) announced that women will be inducted into the IAF’s combat forces after all.

I have spent the last few days reading my former colleague Priyanka Dubey’s three-part series on Indian policewomen. One of the things that stayed with me is how heavily the dice is loaded against the 5.33 percent of the Indian police force who are women.

At the lowest ranks, in central India especially, many women join when positions are offered to them as ‘compensation’ for the loss of their husbands who died in service. For this particular subset of women certainly the job can be seen as a departure from their existing lives, a career decision they were unprepared for and took under tragic circumstances. But even under these circumstances there is no telling what a grown woman can achieve when opportunity comes knocking. There is no inherent difference between a man or a woman who joins the police, other than the expectation of failure. All of Dubey’s reporting indicates that almost every single woman who joins the Indian police is told throughout her career that she is not good enough.

As the series points out, many women join the police force under-nourished and anaemic. They have rarely been part of any athletic programme or encouraged to play sports, unless they are one of a handful directly recruited from sports teams. Often, they come from homes where they are the first women to go into professional service. Women, especially those in the lowest ranks, are barely trained. The fact that they are not expected to have normal careers (including ambitions, expectations of promotions, success, failure, embarrassments and praise) ensures that their senior officers do not train them or assess them appropriately. They are in fact treated not very differently from the children, yes children, in Chattisgarh who get compensatory positions in the police force when their fathers die in service. Our policewomen are treated as people who need to be escorted everywhere, who can’t look after themselves and who have been foisted as an additional burden on the real police, aka, the men.

Senior female officers, on the other hand, come into the hierarchy with moderately better chances. They can expect to find some role models in the force. The regulations are relatively in their favour. They are likely to possess formal education and to have already passed varying levels of competitive exams that only fools can accuse them of having fudged. Sure, Patna Police Headquarters until recently did not have women’s toilets, but really, who does? They can be assigned tough cases, difficult beats and are expected to go out at night on their own. No one can really call these officers ornamental. Only mutter it behind their backs. Some families will even support their life choices, as long as they don’t ever forget to buy vegetables and cook dinner.

Then yesterday, I read Air Chief Marshal Arup Raha’s comments on why there are no female fighter pilots in the Indian Air Force. According to Raha, women don’t fly because they can’t. Or according to a serving major-general because he can’t bear the thought of Indian women being taken as POWs. Unlike his potential forbearance about our armed forces raping Indian women.

Much like Arup Raha did not fly 3,400 hours before he joined the Air Force. Much like women in Pakistan, China, Turkey, Russia and the US couldn’t fly fighter jets before they were trained to.

I like to entertain myself with visions of some uncle telling baby Arup Raha that he could never join the Air Force because his hair was curly. Or a teacher telling 10-year-old Arup Raha when he was in Sainik School, Purulia that Bengalis famously disappear in airplane crashes so he shouldn’t dream of flying. Or some hard-ass, reality-loving trainer at the National Defence Academy, Pune telling an 18-year-old Arup Raha that he shouldn’t join the Air Force because that would distract him from his cultural heritage of writing poetry or singing Rabindra Sangeet.

I like to entertain myself with these thoughts because a variant on these irrational pj’s is what is passing for policy in enormous, state-funded organisations. 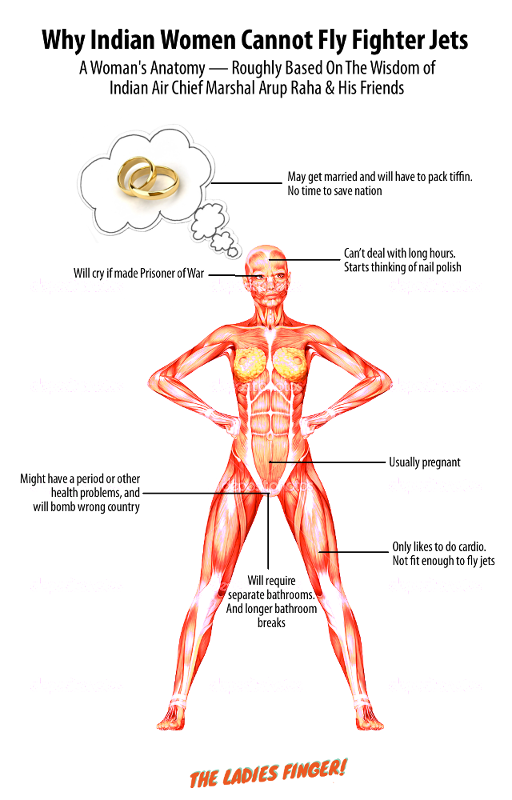