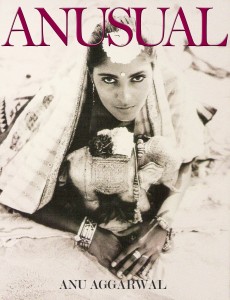 The first time I saw Bollywood actor Anu Aggarwal on-screen was in a movie called Khalnayika – a remake of Hollywood’s The Hand That Rocks the Cradle. I grew terrified of the woman because I figured out eventually that if she stood in a corner, gritting her teeth and narrowing her eyes, it meant that somebody in the movie was going to die. My sister was frightened by the way she ate apples. The knife would cut into the apple sideways and continue all the way up to her mouth. All this would happen while she was calmly overseeing the execution of a murder she had planned. 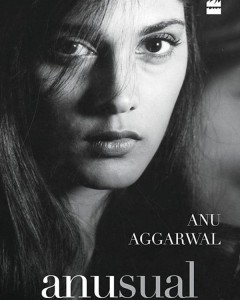 I guess I was more frightened by the tininess of the knife and how incongruous it seemed in her elegant hands. And in Aashiqui, her debut, she blackmails her agent by grabbing his lighter and holding it to her face, threatening to set it on fire.

All of this came back to me when I set to reading Aggarwal’s memoir, Anusual: Memoir of a Girl Who Came Back from the Dead (HarperCollins). Aashiqui happened, as Aggarwal says, when director Mahesh Bhatt looked at her one day and said “You are a star!” He wrote the film for her and convinced her that she would be playing the real life Anu. She took a long time considering the role and eventually only agreed to do the movie only if certain conditions were met. As she says in her memoir, she would not:

– Wear fake eyelashes or pink rouge to highlight and display the rose of her cheeks.
– Wear white base to look fair.
– Wear falsies to enhance breasts, which were then deliberately shaken in item numbers.
– Wear navel-revealing frilly skirts.
– Wear fake smiles.
– Entice with a damsel-in-distress look of a single girl dependent on her father or brother.
– Curl or cut hair in steps.

She would have, she insisted, her own fashion designer.

Shooting began immediately after Bhatt had agreed to these conditions. He gave her a copy of Gabriel Garcia Marquez’s Love in the Time of Cholera to prepare her for her role. Anu Varghese, much like Marquez’s character Fermina, is all passion. While Fermina struggles between Florentino, her former lover, and Urbino, her husband, Anu Varghese struggles between Rahul (played by Rahul Roy) and going to Paris to become a supermodel. In the end, Rahul wins. This is why the movie remained incomplete for me, and I want to say, for her too. Because she was a woman trying to be independent and almost becoming one, until love came in the way.

I was hoping to find out more about her work in Aashiqui and Khalnayika, but this was among the book’s few letdowns for me: it covers little to nothing about her experiences of having acted in these movies. Anusual’s focus is on Aggarwal’s journey towards becoming a Yogi – or style Yogi, as people would later call her.

One of the few puzzling things about the book is the different voices Aggarwal uses in the narrative. The book opens with a musician named Rick – seeing her for the first time and falling madly in love with her. (In yet another connection to Latin American writers, Aggarwal was also carrying a book of Pablo Neruda poems with dried roses for markers in her bag that day.)

On a late sunny afternoon, Rick, the jazz drummer, felt his heart pulsate to a new beat. With breathless excitement he looked at her – the girl from another town with an enigmatic air about her. Her wide shoulders defied the old-fashioned Victorian idea equating a woman’s beauty with sloping slim shoulders. I dig you, Anu, was a thought he did not put into words; it was a new association.

Much of what Aggarwal says is in the first person, except when somebody is falling in love with her or somebody is insanely jealous of her beauty, which is when she jumps to using the third person.

The long-jumps into the third-person narrative became easier after the fifth time it happened. By then, I was convinced that it was Anu Aggarwal looking back at Anu Aggarwal in Mahesh Bhatt style so I didn’t much mind the leap or the tone. Also, I started to imagine Morgan Freeman reading these bits, and that kept me entertained for the rest of the book.

The fact that Aggarwal returns to talking about being dark-skinned very often in her memoir indicates that some part of the book is a response to the fair skin brigade. She recalls more than three incidents where people around her wondered if she could be made to look fair to be able to appear onscreen. From Anusual, you get the sense that she entered Bollywood knowing very well what it was like, but she quickly became one among the few heroines who managed to resist ‘typecast’ roles for women.

Under the full moon, her body glistened with perspiration that came from desire. The round depression in her visible navel rose and fell like the waves in the sea do in high tide.

Later in life, after rejecting offers from Hollywood, Aggarwal joined an ashram in Uttarakhand. This part of the book really had me intrigued because here she was deemed a natural outsider. I was curious to see how she survived two worlds, both of which she was an outsider to. Stories like these can easily slip into tales of victimhood, but Aggarwal steers away from calling herself a victim.

Aggarwal does yet another voice, while talking of how she grew intimate with the head swami, whom she calls Swamiglee.

Passion of love came from the unbearable lightness in the lotus of the heart, and not from heaviness of the weight of lower chakras where sexual organs, the wetness, and hardness reside.

Her intimacy with Swamiglee prompted a lot of the other bhakts to hate her and eventually she was kicked out of the ashram, put in a car and sent home. Her eviction was planned when Swamiglee wasn’t around.

Even so, she isn’t bitter when she recalls that episode. She is strangely detached from the humiliation that the reader may feel for her at this point. Later in the book, even when she recounts the accident that almost killed her and put her in a coma for 29 days, she assumes the third-person narrative again before clumsily ending in a matter-of-fact tone.

In unexpected October rain, in thunder and lightning, she had been hurried into the hospital in the wee hours of the morning. Four strapping policemen had held a luscious female body that looked opiated, dripping wet with rainwater, oozing red viscous blood […]

Flat- pressed on the bed strapped in wires, titanium knots; I am inside the Intensive Care Unit. In a comatose state I lie ‘asleep’ in a space where fatality is normal. Though unconscious to the world, I was alive.

When she came out of the coma and later underwent multiple surgeries, the doctor operating on her arm accidentally severs her nerve. This left her right arm paralysed. The morning after the mishap, she sent the doctor a gift. A Dutch plate made of eggshells, with red roses and light green leaves etched on it.

“To ease his grief,” she says.

Her stories are intriguing. They are written in much the same way we wish somebody talked about us, because we don’t want to be caught saying too many nice things about ourselves, and certainly not in the way they are said in the book.

I am a sucker for celebrity biographies and autobiographies. For a long time, a small, black copy of Brad and Jen: The Rise and Fall of Hollywood’s Golden Couple sat on my shelf behind a hard-ass copy of War and Peace that I don’t think I am ever going to touch in my life. When I was 19, I believed that I was the descendant of Rajmata Maharani Gayatri Devi after I read her autobiography and spent a week poring over her stories. When I had finished reading it, I was less in love with her because she had entertained all my curiosities and had answered them all, patiently.

Reading Aggarwal’s memoir has offered me possibly the opposite experience. The reader is left more curious about her and her life. I am fascinated by how much of her independence was left incomplete in Aashiqui, and how mysteriously it seems to have been fulfilled in this memoir.