HomeNewsYep, Selfies and Sanskar Will Totes Save Our Betis
June 30, 2015

Prime Minister Narendra Modi’s “Mann ki Baat” radio programme has had plenty of exposure (though none so bizarre as this piece of fake news). On June 27, though, he apparently asked fathers to take selfies with their daughters, though I cannot personally confirm this. (I tried listening to the episode, but kept fast-forwarding as an act of self-preservation and couldn’t find this call for selfies. For those of you brave enough to try, here you go.)

The “Beti Bachao, Selfie Banao” campaign (surely this is a campaign name making fun of campaign names? Pinch me so I know it’s real!) seems to have turned into a contest at some point – are we cynical enough to think fathers will only be fathers if we treat it as a contest – and the fathers of Bibipur in Haryana were praised by the PM for sending almost 800 selfies to their panchayat.

What I want to know is, why are there no mothers in #SelfieWithDaughter, apart from celebrities and the latest Twitter selfies? If you want to “bachao” betis, may I remind you that it’s the mothers, not the fathers, who undergo a gender-biased abortion? Mothers are clearly just invisible foetus receptacles, milk machines (insert 1-rupee coin here) and faceless mass manufacturers of “motherly love and food”, #NotWorthTheHashtag. And the presence of mothers might mitigate the vague, untraceable feeling that one is looking at photographs of men with their property.

But where would a campaign be without reaction tweets? Actor Shruti Seth tweeted:

I’m happy to report that she stood her ground despite a swarm of trolls.

And Kavita Krishnan, Secretary of the All India Progressive Women’s Association, referring to the Gujarat Snoopgate controversy in which someone’s daughter was spied on by government officials for no reason, tweeted:

Kavita Krishnan: Careful before sharing #SelfieWithDaughter with #LameDuckPM. He has a record of stalking daughters.

The venomous and creepy responses to this don’t compare to actor Alok Nath’s response, which has since been deleted:

Strike one: Where’s the caps and punctuation?

While everyone’s still shocked at this spectacular wrecking ball to (what they see as) his traditional image, let’s take a look at his retweets in response to Krishnan’s tweet: 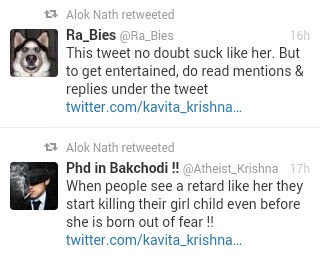 Strike two: Why delete “jail the bitch” when you retweet stuff like this?

Someone please get the man an image consultant before he strikes three and self-destructs through spontaneous self-combustion. It’ll just increase the Mumbai humidity.

10 Responses to “Yep, Selfies and Sanskar Will Totes Save Our Betis”