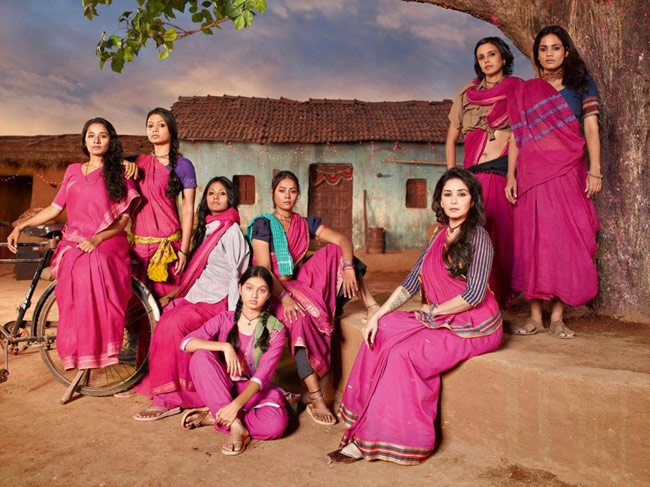 1. It turns out, this two and a half minute trailer has been edited and strung together by a genius. If the trailer is actually kinda not-bad, then just remember that there are *drumroll* three watchable, decently shot minutes in the whole film — a staggering half a minute more than the trailer.  The rest is a single camera, unintentionally non-linear, amateurish mess. Too bad, because we lost the astronomical cine-joy potential of watching Madhuri jump off trucks and stick murderous sickles into various gents.

2. Juhi and Madhuri are the only reasons your eyes don’t roll off the screen, onto your phone, where, out of sheer boredom you set up 60 extra tinder dates. The non-Juhi-or-Madhuri women are – best case scenario – mannequins for all the creepily ethnic Pochampally and Dharwad blouses or – worst case scenario – hipster Bombayites trying to be rural, who haven’t done us the courtesy of even watching Mirch Masala (thanks to Usha Iyer for this point).

Juhi probably the biggest surprise, she keeps the right balance between shooing away and retaining giggle-rani Juhi (a glorious 90s treasure). She is actually as starchy and menacing as her saris. 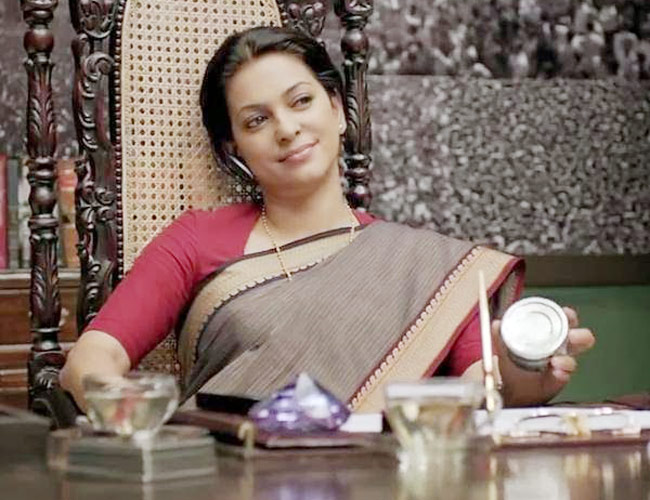 3. This cynical zeitgiest-catchup/ women’s day/ post December-16th marketing needs to stop (or produce better movies!).  Here is what we have to look forward to next: Kanchi and the most certainly not-pediatric W.

4. The director of the movie is called Shoumik Sen. Perhaps, we shouldn’t stereotype with names. Then again, read this interview with him and try and hold your peace: “If you are a Bengali there are two things naturally ingrained in you, one is Tagore, the other, Ray”. You do really spend all of Gulaab Gang wondering if its yet another Bengali, bhadralok, straight, male plot to take us ladies-log down.

5. To survive watching Gulaab Gang, you have to imagine a better film to compensate for the crummy one handed to us. That film exists — enjoy.