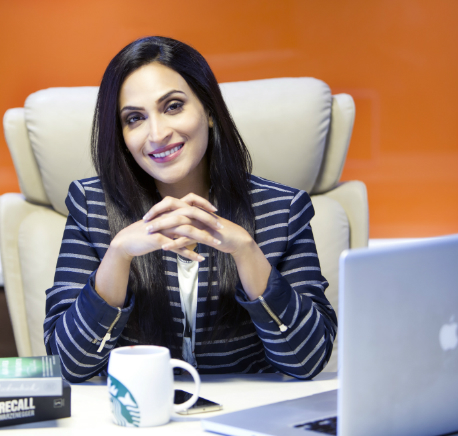 Aishwaryaa R Dhanush may need no introduction to most South Indians, thanks to the letter R in her name – that of Rajinikanth, whose daughter she is. It’s curious to imagine what it must be like to grow up as the child of a superstar. And that is what her book, Standing on an Apple Box: The Story of a Girl Among the Stars, gives us a little peak into.

She was in conversation with Naman Ramachandran at the Times Litfest Bengaluru 2017, presented by ACT Fibrenet. Both of them are experts of sorts on Rajinikanth. Aishwaryaa, an expert by virtue of being his daughter, and Ramachandran, an expert because of the biography he had written for the star, Rajinikanth: The Definitive Biography.

Ramachandran joked about how, as a “Bangalore chauvinist” he always mentions that Rajinikanth was a Bangalorean first, and asked Aishwaryaa about her memories of growing up in the city. She smiled fondly, as she recalled places like Malleshwaram, Cubbon Park and Commercial Street, with nostalgia.

“Some parts of the city don’t change.” – @ash_r_dhanush
“Well, it can if you build a steel flyover across it.” – @namanrs

“Many of the fans even refer to you and your sister as ‘akka’ [older sister], and they are fiercely protective. How do you deal with this extended family, since it is a different kind of pressure,” Ramachandran asked Aishwaryaa.

“We don’t ‘deal’ with it,” Aishwaryaa responded. “We enjoy it! They make you feel protected and wanted, and at home where ever you are. There are times when you wonder how you can reciprocate this kind of unconditional love and care.”

Talking her about her childhood, Ramachandran asked her about the first time she experienced the intensity of her father’s fan base, “Which film was it? And where was it?”

“I realised that it was not normal when I went to watch my first film in the theatre. It was my father’s film, that was the first film I went to the theatre ever!” she narrated. “It was Thalapathi and a premiere show.” She spoke about the first time she heard the loud cheering and applause. “It was overwhelming, and when we got back home, I asked my mother if that was how it worked all the time.” From then on, Aishwaryaa has been there for every premiere release of her father’s film.

A while before the session, we spoke with Aishwaryaa about her writing journey.

How did Standing on an Apple Box: The Story of a Girl Among the Stars come about?

I would say that it was not something that was planned at all. And writing the book was a very breezy process. Because this is not something where I want to prove my language skills or how good I can write. It’s more like pages out of my own diary. So the experience of writing it was pretty nice and simple.

Were there any revelations you had while writing it?

Not really, it was more of picking out memories and experiences from the past. It was more of a reminiscing experience more than revelation. So it was living moments all over again, reliving those experiences, and it felt beautiful.

Why did you choose to put these very private moments of your life out there?

It was only the moments that I thought were okay to share that I put there. You know, we have a lot of goodwill and unconditional love that my family shares with people. So these were the things I thought would be great to share with people who wanted to know a bit more about our lives. And to break the myths and notions people have about celebrity kids. People believe that they behave in a different way, it was a way of saying that we are pretty normal.

Do you think some things would have been different if your were Rajini’s son rather than a daughter?

I don’t think so, but I’ll never know, I guess. I think the responsibility is the same, it really doesn’t matter if you are a son or a daughter. I think people’s attitudes are changing — the world is moving towards gender equality.

Do you have any other writing projects planned?

I am contemplating on writing my next, and it would definitely be fiction. I used to maintain diaries, which I unfortunately don’t have anymore. Perhaps, I’ll write a book of short stories.