HomeHealthWas I Wrong to Celebrate Her Decision? Hell, No! 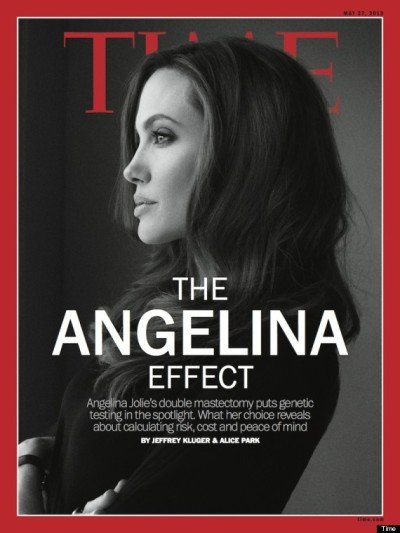 (What you’re about to read could quite unarguably be summarized as: We need to start cutting off body parts in a ritual sacrifice to stop global warming.)

Unfortunately, I seem to have been more in love with feminist language than with feminism itself, because my first reaction to Jolie’s prophylactic bilateral mastectomy was “Fuck, yeah!”

Then it turned out I was wrong. G Arunima has laid it all out there clearly.

Picture my dismayed face: I doubt that dancing imp inside me has anything to do with corporations, patenting the BRCA gene tests. Then why was I feeling so happy about this?

I’ll tell you why FL has eloped (apart from the usual annoyingly maudlin reasons). We feminists are being too reasonable about everything, that’s why. We’re concentrating on getting our civil rights, breaking through glass ceilings, publicly killing our foetuses, not getting bashed about by men, not getting raped by men, not getting abused by VS Naipaul or Abhijit Mukherjee, not being made to feel ugly and starve to death by corporates, not being covered by those extra square inches of cloth we don’t want. Which are all highly valid and important (except, of course, VS and Abhijit: who cares about them, really?).

But FL wasn’t cut out for this kind of life. FL was designed to be bizarre, campy, crazy, funny, flighty, frivolous, fuck-you. And most of all, FL was supposed to remind us that life’s too short. There’s nothing she likes better than a good urgent apocalypse.

The thing is, G Arunima is almost impossible to argue with on her own, admittedly reasonable and perfectly feminist, turf. Let me therefore introduce Exhibit A:

Kip Manley (I have no idea who he is) tweets: A refusal to think apocalyptically may soon count as irresponsible.

My biggest problem is that I can only think apocalyptically, which results in rather irregular brushing and bathing habits, among other things.

So let’s see if this casts a new light on things. Firstly, life was clearly too short for Jolie to hang about waiting for breast cancer to happen, after she tested positive. Especially since she happened to have enough money to preempt things.

Full disclosure: My mother’s mother had breast cancer twice. My mother’s sister, once. My mother, twice. It always seemed quite likely, with or without BRCA (which I only heard of recently) tests, that I would have it too. I’ve often considered preventive mastectomy, if only to increase my chances of dying in a less painful way. Or of living a life without chemotherapy. It certainly helps that I’m queer and wouldn’t mind looking androgynous. I’m also lucky because there are millions of cancer patients out there whose affected organs aren’t as (biologically) dispensable.

You got a problem with the way the world seems to be treating female parts as dispensable? I won’t even dip my toes in the foreskin debate here.

Put yourself in my shoes: time isn’t on my side. I don’t want to wait another four decades and ‘chance it’ because it’s politically correct not to cut off my breasts. Because corporates and a celebrity (don’t we waste a lot of energy hating celebrities?) are advocating it, we don’t want to touch it with a barge pole, even if it means a lump or two less in our lives. Well, I admire those who’ll risk chemotherapy to stand by their beliefs. But I’m not one of them. I know that we might have more cancer than they did a few centuries ago, and I know that could be because of the increased stress of modern life (of course, modern life also gives us better nutrition and stuff) and a gradual ecological collapse.

And I know no one’s considering these factors in the Jolie debate because we seem to be living in a bubble of apocalypse-denial which includes, let’s say, our great grandchildren. After that, we haven’t considered what a completely different life their descendants will be living. The pollution, the lack of resources, the disappearance of rock oil. The wars, the loneliness, the rise of mental illness, the depletion of rainforests. The population boom. The hate. The apparent irreversibility of global warming. The rise of terrorism and anti-terrorism.

This bubble is anthropocentric too. The great auk can fuck off the surface of the earth, trees can get their branches lopped off by the State Electricity Board, but we and our bodies are somehow exempt from these (dismembering) forces in the world.

And because of this, we don’t look beyond our individual lives and our indignation at being asked to lose a few (okay, many) mammary ducts. As for those who want nipple pleasure (and can’t afford to preserve them as Jolie has), I say the first thing we need for the apocalypse is imagination in the face of loss. Come on, there are thousands of species out there who’ve lost everyone they could ever mate with (just before they died themselves). There are fish who’ve lost body parts to oil spills before dying, I’m sure. (I know I have definitely consumed products made from the raw materials transported by ships with oil-spill potential). That’s all pretty much our fault. What’s a breast or two from this perspective?

I want to say that I believe whatever’s being put on the net about a corporate conspiracy (I’m all for believing in them). But if corporate agenda just happens to overlap with our own this once, I’m not ruling out that possibility. If we want to decrease that overlap, let’s deny those rich surgeons the moolah from a breast reconstruction, what say? And if we just don’t have the money, let’s live our life FL-style till the lump comes along, and long after too, what say?

Sneha Rajaram divides her time between her living room and bedroom. She likes to eat Maggi noodles (atta) and read fantasy and sci-fi, chicklit and speculative fiction (whatever that is).

The Chemo Diaries Of Agent Greenglass: The Aftermath of My Surgery

One Response to “Was I Wrong to Celebrate Her Decision? Hell, No!”