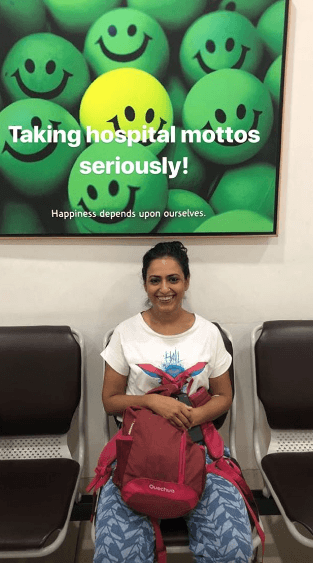 Today was a bloody long day. Note the pun for future reference.

It started with us reaching the hospital at 9am.

The doctor at Kokilaben poohed poohed at this amateur blunder, and there I was giving blood again.

It was easy peasy, except they stared at my arms. I had done my earlier blood tests at Holy Family, and had black-blue track marks from where the needle had gone in.

This time the blood people pooh poohed at this amateur blood withdrawal technique.

Question: What are the people who take blood called? Blood collector? Blood operator? Blood Sister? Seriously, I don’t know what they are called.

Anyway, they did a super job.

And next we went to the Nuclear Department for the PET CT Scan.

I had done no reading on it. In fact, I am doing no reading on cancer, or any such thing, because it will only freak me out. I am going to go into everything with an open mind.

So once I had signed all the forms that basically declared that if I died right there and then, the hospital would not be responsible, I was asked to wait.

We waited about an hour and a half. I’m damn lucky that I have great company. Both A and O are chatterboxes who never once say things like ‘what will happen now’ or ‘oh, so sad I am feeling.’

Note: If you ever accompany anyone, please don’t be the freaking out kind. The patient is probably determined to deal with stuff, because he or she has no option. Which means all you got to do is be normal, and not start passing out at the thought of scans or needles. And please do not start looking sad or start chanting under your breath. It does not help!

Actually, a blog post on how to receive the news and what to say is coming your way next.

Also, in between this, the doctor met me, asked questions, explained how radioactive it is, and how I could be sick, have loose motions, itching, irritation etc etc. All the sort of pleasantries you make before going in for a scan.

So finally I was asked to come inside. And they fitted the needle that goes straight to your veins. Then I waited some more. Then I was asked to change into hospital wear. Which I must say had a certain sartorial elegance to it. Little yellow flowers on an off-white shirt and pajamas.

Again, there was waiting. Which brings me to the fact that the word patient is literally that. Once you fall ill and land up in hospital, you just gotta be patient. There’s no telling when your number will come and when you’ll leave. So all you can do is read or tweet or instagram.

Which is okay, till you do your PET scan, because gasp…no mobiles, no specs, no kindle, no books.

This is when I was called for the final time. And led to a darkened room. It had three huge lazy boy recliners, and a fluffy blanket in each. I kid you not, some popcorn and I would have thought I’m in a personal movie screening where they take blood instead of tickets.

Anyway, a lady comes and injects two big syringes of liquids into me. I’m guessing this is the radioactive stuff they put in your body. Because I have done some last minute googling :b

The PET scan is basically when they inject some radioactive material into your body. It accumulates near the organs and gives off gamma rays. Special cameras then pick this up, and create imagining. Okay, it’s more complex, but this is the nuclear medicine for dummies version.

They also give you a big bottle of clear liquid to drink. It was labelled Oral Contra, which I am guessing is the dye. And now you sit back on the lazy boy, under your fluffy blanket and sip this bottle empty for the next 60 mins. So chill, so fancy!

Except every ten mins I had to pee. And I kept wondering if I put off the lights, would my pee glow in the dark. But because I don’t really care for public bathrooms, I didn’t really carry out this scientific research.

Finally, after 60 mins, I got called. Into a huge room, with a glass room next to it. Like a sound studio. It was like an MRI machine but narrower. They strapped me in. And before I could freak out, I was in that round hole. They kept sliding me in and out of it, in intervals.

They had warned me when the medicine gets activated I would feel warm. Well, there was silence. And suddenly I felt like I had peed in my pajamas. My mind mildly panicked as I felt a warm feeling creeping down my legs. Next, it was in my hands and feet. And then it was over.

The attendant came out. Said ‘ho gaya’. And that was it. I was unstrapped and out of there like a shot.

Apart from the fasting from morning to about 3.15 in the afternoon, and the general waiting around, it was pretty easy.

PS: I read that after a PET scan, in some people have set off alarms in airports etc. Nice party trick!