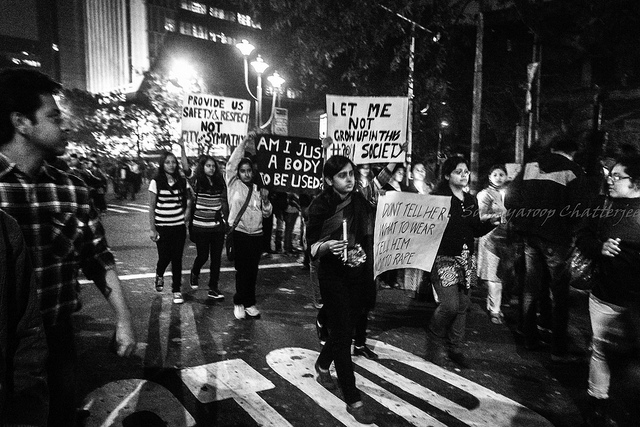 Over at Kindle mag a strange thing has happened. A young woman, a student at St. Stephen’s College, Delhi wrote earlier this week about her experiences of sexism as a college student. Specifically, she talked about the different curfews for male and female students at the hostel — no curfew for men and a 10 pm curfew for women.

As has been observed elsewhere, from eternity right up to the recent 10 pm ban on the entry of women into Andhra bars, it really would be safer for everyone if there was a curfew on men and they were kept at home and asked to listen to light music on All India Radio. Since no one is listening to this sterling piece of common sense it comes back to students to have to bang, prod and scratch at the ridiculous double standards as much as they are able to. Like this young woman and her sincere attempt to make sense of her experiences.

Yesterday, Kindle’s status update on its Facebook page showed what happens to the young men and women — those same whom India likes to claim as its demographic dividend — when they show any sign of thinking for themselves. The update stated: “One of our columnists is being made to feel scared by her family, her professors because she has written about the deeply misogynist and random policies of her reputed college hostel (for her sake, not taking the college name) in Delhi. She is being told that she might be suspended. The article needs to be taken off from the website. But we won’t. It will only go with her name changed. She isn’t privileged enough to even register her protests or be heard and we are not privileged enough to protect her.”

As of this morning, the Kindle essay is now running under the byline ‘Anonymous’, with all that that word means in the summer of 2013, including massive anti gender-violence campaigns. Why Kindle feels that the student requires more ‘privilege’ to be able to protest, and why the magazine also needs more ‘privilege’ to do anything about it, is beyond us.

Oh, did we say that a strange thing has happened at Kindle? The strange thing happened at St. Stephen’s, and apparently it’s just strange all over. Campuses being sexist is a pan-India phenomenon, as this report from The New Indian Express shows. Some choice quotes:

Third year St Stephen’s student: “A lot of us were subjected to hostility not just by the faculty but also by students because we wanted unrealistic deadlines to be curbed. We were locked in our dormitories by 10 pm and not allowed to step out. The issue really is why is this bias against girls when boys are free to roam the campus or elsewhere anytime they wanted. When we question, we are shown the prospectus which has a deadline of 7 pm for the girls hostel in all colleges.”

Debraj Mookerjee, professor of English at Ramjas College: “The Constitution of India allows men and women to have equal rights and freedom, but the university does not seem to agree with it. It seems to be living with the misconception that women are not their responsibility but that of the parents or teachers and so on. It seems to believe that women are incapable of making their own decisions. It is a question of the need for a drastic change in mindset…When exchange students come from the US or other countries to our campus, nobody calls their parents to tell them what their wards might be doing. They are responsible for their actions. Whenever something ‘unusual’ happens, the immediate response in India is to inform parents. Why? Why should you involve parents, they did not do anything…What concerns me is the deep-rooted patriarchy in this society and it is instilled irrespective of the gender. They have to be given the freedom to make decisions. Imposition is not the solution.”

Abhija Ghosh, former student of Ramjas College and a graduate of Jawaharlal Nehru University: “It’s all right for boys to roam around the city at wee hours but not for girls to step out after 7 pm. Clearly, there is general disregard for gender equality…There is this paternal attitude towards girls which is again completely unwarranted. Not just in college, but also in residential areas and PGs. Infantilization only happens in the case of women, as though they are incapable of making their own decisions.”

Of course, the craziest quote is paraphrased in the St Stephen’s students’ petition on Sanhati, and it belongs to St Stephen’s Principal Valson Thampu. Of course. This is what the students reported him saying: “The Principal came to the GBM [General Body Meeting], and behaved in an extremely high-handed and authoritarian manner, terming the issue of curfew as a ‘petty grievance’ contrived by a few mischief makers. He made highly sexist comments proclaiming that men and women were not equal – they were different, like apples and oranges, like eggs and stones, and had to be taken care of differently. He refused to recognize the students right to voice their demand, claiming that they were mere guests and that he could force everyone out of residence and keep the buildings empty if he so desired. A student pointed out that women’s curfew is a traditional patriarchal gesture, a question he ignored.”

Ooh. Eggs. Stones. The Malayalis amongst us at The Finger are hearing a distinct whiff of ellayum-mullum — that ugly analogy of leaves and thorns that advises that women will get stiffed every time.

P.S. Wonder what feminist novelist Sarah Joseph thinks of Valson Thampu’s choice of metaphors. Thampu was the translator of her novel Aathi.

18 June, update: Ameya Nagarajan, editor at Penguin India, points out that the Andhra Pradesh ban referred above was never a ban, just misreporting. Our bad.