HomeNewsArgentinian Women Take to the Streets in the Thous ...
October 20, 2016 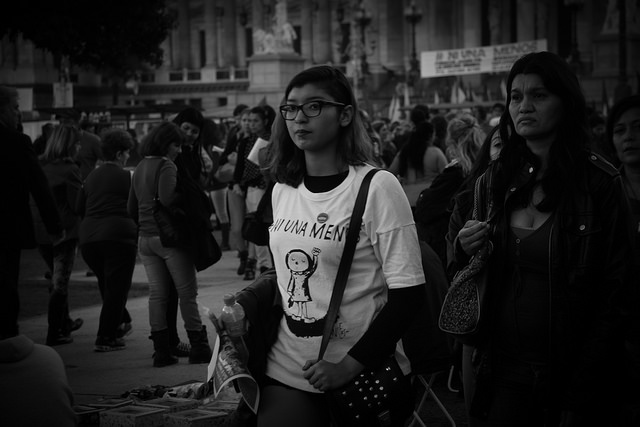 Reports indicate that Perez was overdosed with cocaine, raped and tortured before she suffered a heart attack because of the severity of the attack. María Isabel Sánchez, the prosecutor on the case described it as “an act of inhuman sexual aggression”. Two men who have a reputation of dealing drugs outside a school were detained on Sunday, 16th October on charges of rape followed by homicide.

Women wore black and left workplaces for an hour at midday on Wednesday, “in mourning for all of the dead women, all of the women killed simply for being women, ” as one Ni Una Menos activist described it. They had previously organized on social media under hashtags like #NiUnaMenos (“Not one less” indicating that every day one more woman’s life is lost to violence) and #MiercolesNegro (BlackWednesday).

The Argentinian women marching in black are also reminiscent of the victorious Polish women’s protests earlier this month that overturned the government’s ridiculous proposal to ban abortion.

The nation-wide protest follows a series of women’s protests, since the march on 3rd June 2015 for the death of fourteen-year-old Chiara Paez and recently, in Rosario, demanding abortion rights. Argentinian President Mauricio Macri has proposed a national plan to combat violence against women in July this year — including measures like a hotline for abuse victims, monitoring of abusers, and shelters for women. Activists have said that this may be a beginning but have astutely placed the focus of the problem as that of machismo (an aggravated masculinity), ingrained into the cultural fabric of Latin America. A woman is murdered every 31 hours in Argentina as many reports note. According to the Secretariat of Human Rights, nineteen women and girls have been murdered in the first eighteen days of October. As in India, Argentinian activists are asking, is violent crime against women on the rise or is it being reported and protested more?

Image credit: NiUnaMenos IV by Rodrigo Parades via Flickr/CC by 2.0