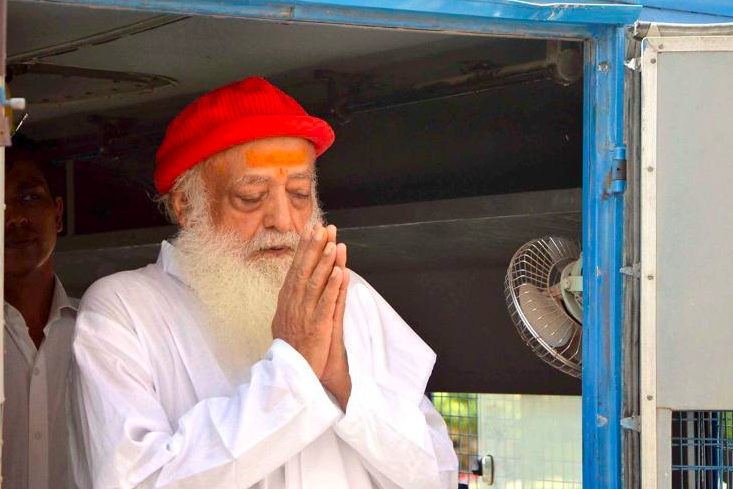 Yesterday, Asaram Bapu was finally convicted and sentenced to life imprisonment for raping a Dalit minor, aged 16, in 2013. Two of his aides named in the case, Sanchita alias Shilpi and Sharad Chandra alias Sharat Chandra, have been sentenced to 20 years in jail each, while two more, Prakash and Shiva alias Sava Ram Hethvadiya, have been acquitted.

Of the nine witnesses who dared to testify against Bapu, three of them mysteriously dropped dead since the beginning of the case, but thankfully, the Bapu has still been found guilty.

Asaram is also facing another rape trial in Surat, in which the SC has directed the prosecution to complete the trial in five weeks.

The Times of India had the snazziest headline on the issue so far, with a report titled ‘Asaram ‘Bapu Maharaj’: From ghetto boy to godman to jailbird’. Other reports detail how his supporters had gathered in various parts of the country and wept when news of the verdict came out, while the rest of the country, and we presume, particularly the six remaining witnesses who testified against him and hadn’t mysteriously died yet, were mostly just glad and relieved that he had been finally been locked up.

Intriguingly, given how irrelevant it is to actual law, the judges mentioned in the order that “the accused not only broke the trust of the complainant, [but] also damaged the image of saints in the eyes of the general public”. Now, this isn’t exactly a spotless image thus far, after the likes of Gurmeet Ram Rahim Singh being found guilty of raping his disciples at the Dera Sacha Sauda in Punjab just last August, reports that Swami Nithyananda of Karnataka made his disciples sign what basically amounts to a sex contract and the fact that the late Sathya Sai Baba of Andhra Pradesh was accused in 2000 of molesting young white boys.

But it isn’t just the reputations of saints some folks are worried about, it seems. MARD founder Farhan Akhtar was one of the few Bollywood actors who spoke about the verdict, and decided to spend his one tweet defending PM Modi. Several social media commentators were apparently tweeting pictures and videos of Modi with Asaram Bapu, claiming he had received blessings from him, which Akhtar clearly took grave offence to.

So, Asaram is a child rapist. And he has been found guilty. Good.

But can people please stop sharing images of him with PM Modi. Patronising him before he was exposed to be a pervert is no crime.

Let’s be fair and give him the benefit of doubt that he, like us, did not know.