Omar Zafar (Danny Denzongpa), the No.1 criminal on Interpol’s list, escapes a British prison after killing Colonel Viren Nanda (Jimmy Shergill in a cameo). Before dying, Viren promises Omar that his death will now be imminent. Omar, with the help of his trusted sidekick Hamid Gul (Javed Jaffrey) announces a reward for the Kohinoor diamond – which he plans to use to destabilize plans for a clean extradition treaty. Meanwhile in Simla, Harleen (Katrina Kaif), an innocent and virginal (to the point that she doesn’t even know how to kiss) bank receptionist, is living a boring life, and is being harassed by her dadi (who was a playgirl in her heyday) to find a boyfriend. When the Kohinoor diamond turns out to have been stolen by someone, dadi tells Harleen that that’s the kind of lover a girl should aspire to have. Obviously, the diamond’s been taken by Hrithik Roshan (Rajveer aka Jai Nanda, Viren’s brother) who has stolen it to get to Omar Zafar. The rest is lots of location and costume changes, shirtlessness (cue: girly squeal), dubstep tracks and a lot more action. 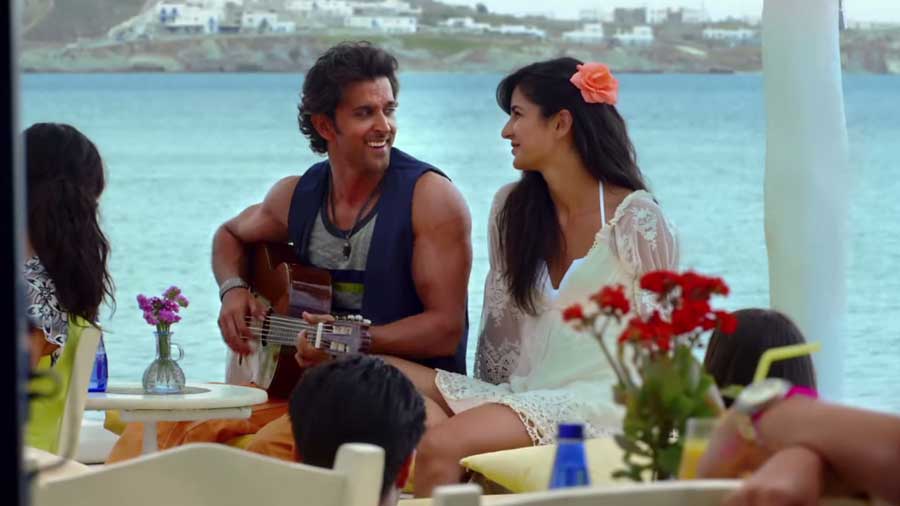 Every bullet fired by the villains obviously blew some holes in the plot, and scenes that would make a spy movie a spy movie were replaced with songs. For the underinitiated, Bang Bang! is an adaptation of the Tom Cruise-Cameron Diaz starrer Knight and Day. Except for the excellently executed Hollywood stunts, this was a total Salman Khan movie (his movies have excellently executed Tollywood stunts.)

Bang Bang! is shameless propaganda in favour of Caveman Courtship rituals. Every time Rajveer meets Harleen, he drugs her and abducts her to another location. Except for the first time he meets her, when he lies to her about being the online blind date she is waiting for, then drugs her and drops her off to her own house. In fact, for the first half of the movie, he is constantly drugging her and abducting her from one location to the other so much so that there is an entire montage from her POV, where she keeps fading in and out and the location keeps changing. Somewhere after that montage, Stockholm Syndrome kicks in and she starts following him. He, obviously, doesn’t want to share anything about his life with her. Because he is a spy. But he teaches her how to kiss. Because he likes her, he carries her around just like the diamond he has stolen, telling her that it is for her safety. Serious issues, bro. (Of course, they show Harleen doing the same to Rajveer as an epilogue but then she abducts him and takes him home, to his mother. Hashtag aadarshnari.)

The movie has one named female character – Harleen. (C’mon, “dadi” is not a character name!) In fact, there were no other female characters, save for Deepti Naval playing Jai and Viren’s mom. Even Salman Khan movies are better off in this department – they’d have a vamp, a heroine’s friend, or even the police force would end up showing us some women cops. Bang Bang! has international high-tech terrorist organisations, the Indian Secret Service, and the police force of half a dozen countries and yet we don’t see a single woman character, named or unnamed. What is more disappointing is that the adaptation was co-written by Sujoy ‘Kahaani’ Ghosh.

PS: What a disappointment after watching the two lead stars romance in Zindagi Na Milegi Dobara.