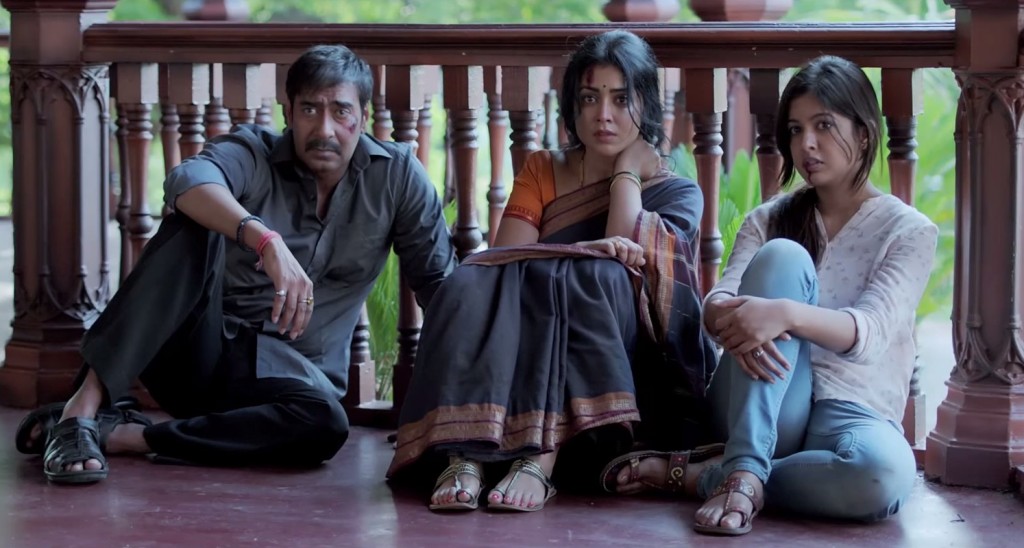 Drishyam (2015) is a Hindi remake of an eponymous Malayalam thriller from 2013. Vijay Salgaonkar (Ajay Devgn) is a “middle-class aadmi” living in a bafflingly massive bungalow in a small town in Goa. One day his wife Nandini (Shriya Saran) and daughter Anju (Ishita Dutta) end up killing a sexual predator in self-defence – a man who turns out to be the son of Inspector-General Meera Deshmukh (Tabu). Vijay then tries to bamboozle the police as they hound him and his family.

Drishyam coyly plays hide-and-seek with the Bechdel test – testing it is practically a thriller in its own right. The most that can be wrung out of it is a conversation between Vijay’s wife and daughter about the things they want to do in Panaji – shop-eat-ice-cream-watch-movie and whatnot. However, since they do this at the family dining table while beseeching Vijay to take them on this trip, it isn’t exactly an empowered conversation.

The other conversation between mother and daughter – as they attend to their would-be rapist’s corpse – is a lot more empowered. However, they are referring to a man’s corpse, there’s no denying it. Is a corpse still a man when it’s dead? Interesting metaphysical question. But not for Bechdel purposes. A dead male rapist is sadly still male.

Spoiler alert: there is a torture scene in which Vijay’s wife and daughter are beaten up by women cops who shout at them to “tell the truth”, so that does pass the Bechdel in a fast-and-loose way, I suppose, if we can try and forget that said “truth” is about a man.

How does the movie treat women, then? For the most part, horribly. Quite apart from the three hapless women who depend on the head of their family for everything – a mother-daughter team is unable to wrestle an unarmed skinny teenage boy in their own outhouse, which is telling every mother and daughter in the audience they can’t do it either – Inspector-General Deshmukh is the typical ball-busting policewoman who’s set up for a fall: angrier than her male peers, illegally tortures people, measured voice, that sort of thing. We watch helplessly as she turns into a shrill weepy mother who can’t stick to simple laws of interrogation and needs her husband to keep her on the straight and narrow.

The non-horrible treatment of women boils down to the scenes in which Vijay’s womenfolk resist interrogation (thanks to his coaching, though), and Tabu’s chilling performance (But that’s Tabu, not Drishyam).

The (figurative) police-bashing does, as a friend said, have a cathartic effect on the audience – much whistling whenever Vijay manages to outwit the police. And the Grand Panjandrum of police-bashing, Arvind Kejriwal, proves this with this tweet:

And a big fat thumbs-down to the casteism/racism, when Vijay calls villain Inspector Gaitonde “kaala”. First things first, why does the villain always have to be dark-skinned?

All in all, Drishyam is a prime motivator for gentle hara-kiri. Let’s do it.

Is it Weird that a Dickens Novel Speaks More Intimately to Women than Fitoor?

One Response to “Tabu’s performance in Drishyam is chilling. Everything else about this movie makes us suicidal”